We are living in a time of great turbulence caused by fake news, clickbait titles and, a rising phenomenon that has made a lot of noise recently, ad fraud. Even though a lot of efforts have been put into ad fraud detection, the number of fraudulent impressions stays alarmingly high. Ad fraud detection companies have reported that the biggest problem exists in the OTT environment which is filled with invalid traffic. In fact, more than 20% of all OTT was discovered to be invalid in October of last year. Google has played an aggressive role in ad fraud prevention by removing 3.7 billion malicious ads in 2017, which is significantly higher than 700 million ads that were blocked in 2015. 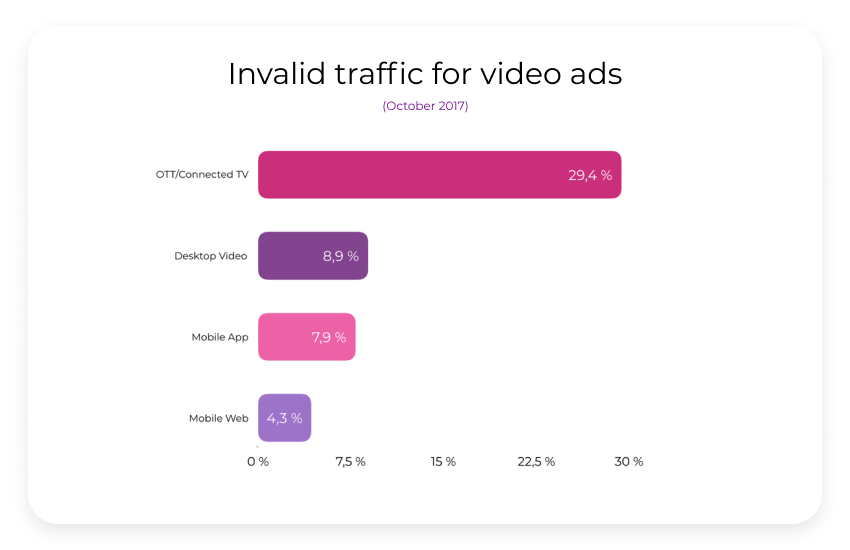 Since ad fraud is such a big issue, let’s take a look at five things you can do to prevent it.

There are lots of ad fraud verification technology providers to choose from, which can protect you from the various types of existing ad fraud. The major ad fraud prevention companies are Integral Ad Sciences, WhiteOps, Pixalate, and Forensiq. In fact, many companies choose to connect to multiple ad verification providers since each one has its own online ad fraud detection techniques.

According to ad verification provider Pixilate, one of their clients, Pocketmath, was able to stop 3 billion suspicious impressions during the first 90 days after they started their online advertising fraud detection efforts. Cybersecurity company WhiteOps was able to cut down ad fraud from 11% of all traffic to less than 1.5% on a regular basis.

Ads.txt was first launched in 2017 and has rapidly grown in popularity with 70% of major publishers utilizing it. This tool is very useful because it allows you to verify the channel that you bought your traffic from. Ads.txt is a file where the publisher lists all of the sellers that are authorized to sell its traffic. During the ad placement stage of the campaign, the client can compare the seller’s ID with the positions on the ads.txt website. If the seller is authorized, you can be confident that you are making a safe purchase, if not, you are rolling the dice. If you are a publisher, you need this sort of advertising fraud protection to prevent your inventory from being illegally sold to a third party who could be using some variation of your domain. It can also help you find out if one of your partners is reselling your inventory via a current exchange.

It can also help you make sure that your ad inventory is valid so that you know that your ads are served on legit publisher inventory instead of on a false domain. This is one of the best ad tech fraud detection methods.

3. Choose Partners that are TAG Certified

The Trustworthy Accountability Group (TAG) has been at the forefront of online advertising fraud detection. In 2016, they launched their Certified Against Ad Fraud Program which fights fake traffic in the advertising supply chain. Companies that abide by the necessary safety and transparency protocols are awarded the Certified Against Fraud seal which symbolizes a company’s commitment towards fighting ad fraud.

Thanks to their ad fraud detection initiatives, they were able to reduce the IVT rate to 1.48% over more than 6.5 billion display and video impressions. Therefore, try to work with companies that carry the Certified Against Ad Fraud seal because you will be able to have more trust and confidence in them because they have been validated by a leading ad fraud detection organization.

When you write down all of your policies and procedures connected with online ad fraud detection, you give your internal teams a step-by-step manual on how to prevent ad fraud in the future. Once you have such a document, be sure to carefully study it to prevent any known weak points in the processes where ad fraud could potentially occur. It is also a great way to show future partners all of your advertising fraud prevention efforts since you will have an external summary document with all of your procedures clearly detailed.

While we mentioned some technologies earlier that provide you with a certain level of ad fraud protection, combatting ad fraud is still a painstaking process that requires thorough vetting of your partners, educating them about ad fraud detection and employing an ad verification service. From this point, you will need to clearly state KPIs that will monitor ad fraud across all campaigns to nature legitimate results. Be sure to monitor crucial metrics such as invalid traffic percentage, which can be used over all traffic sources.

In today’s environment of sensational, salacious news and where all ethics are thrown out of the window. The more steps that you take to combat ad fraud the safer you will be and it will allow the industry at large to detect and weed out offenders to restore confidence in digital advertising.

Since ad fraud is so rampant in the industry, SmartyAds always stays alert ensuring cutting-edge anti-fraud protection round the clock. Advertising with us, you can always rely on comprehensive, multilayer ad protection technology as we teamed up with Forensiq and Protected Media to safeguard the programmatic experience of our clients.

Join secure and trusted programmatic environment as an advertiser or publisher

Written by
Irina Kovalenko, CMO of SmartyAds
January 2019
rate this article
share with friends
Previous Article
next
DSP vs. Ad Network. What is Better for Media Buying? January 2019 Next Article
previous
How to Launch an App: Best Practices for Mobile Games January 2019