The changes in the area of in-app advertising are never ceasing. Naturally, it is not easy to track each of them and keep the finger on the pulse of all mobile app advertising trends but it’s also not necessary for experienced app marketers, developers, and publishers who can separate the grain from the chaff.

We are thrilled to uncover the latest emerging mobile advertising tendencies and mobile ad formats that gained popularity in 2018. GDPR novelties, new safety measures, and other transformations that are here and ‘long to stay’ are also on the agenda.

2018 was a giant leap in terms of in-app advertising effectiveness, and it could be fair to say, it was achieved due to the recognition of specific ad formats such as video ads, native, native, and display. 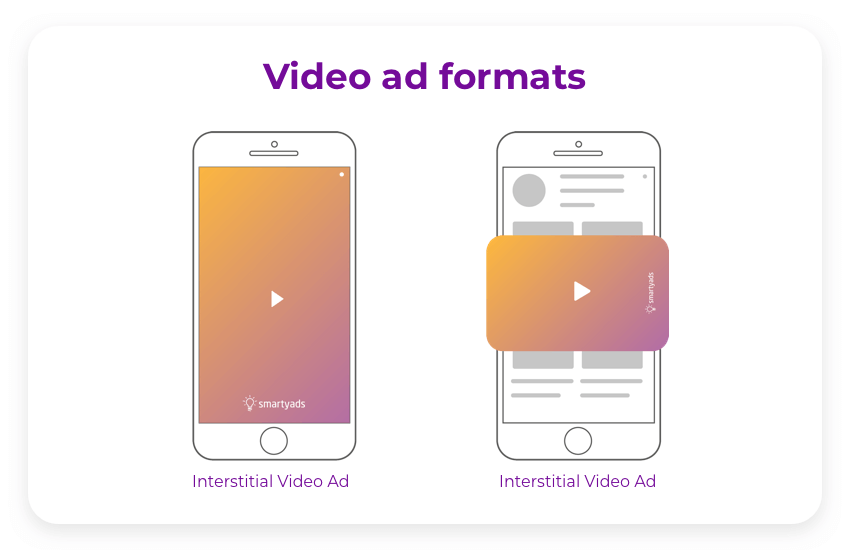 By 2019, mobile in-app ad spend is expected to reach the bar of 72% of all ads, with the video ad format being the greatest publisher’s contributor that brought in over 30% revenue share. In fact, video ad format shows 5 times higher effectiveness and stronger revenue-gaining properties than already exhausted banner ad format.

Native advertising on apps brings only 5% revenue, still, 55% of users admit being ready to share the content of native ad format with others, when the average in app ads are taken as annoying and intrusive. That happens because native ad blends with page’s content so it can exist everywhere - social media feeds, in search listings, content recommendations, etc.

During the last couple of years, however, the users learned how to distinguish in-app ads from the rest of the content. It didn’t affect much the effectiveness of this mobile ad format, still, the native ad should also deliver valuable content and have the ad marks inside and out, otherwise, it increases the user irritation along with a bounce rate.

Within a variety of display ad formats reach media is a one that stands out in the eyes of advertisers because the CTR of this ad outperforms the CTR of an average banner on 250%. According to Statista.com data, rich media in-app ads spend in the U.S will continue growing and in 2019 will reach a whopping 12.91 billion dollars. 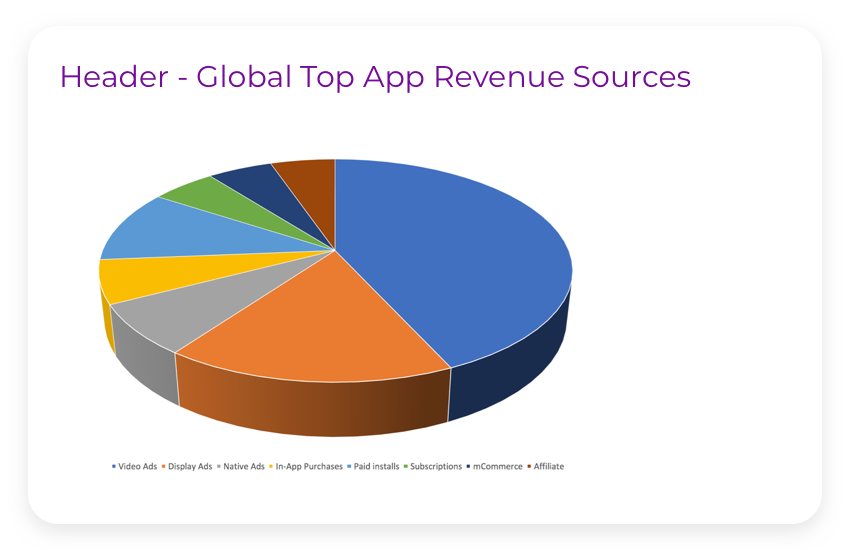 Obviously, in-app advertisements gain momentum. As more and more publishers are ready to risk and embrace mobile web formats that advertising offers today it rewards them with a good portion of app campaign revenue. The better the publisher's website adapted for mobiles, the better the selected mobile ad format will work.

At the same time, according to statistics, in-app purchases remain to be best-performing in in-app advertising market in terms of revenue-driving. They bring in no less than 40% of all publisher's mobile incomes and don’t harm the user experience as after loading an app the decision to purchase additional products appears naturally. 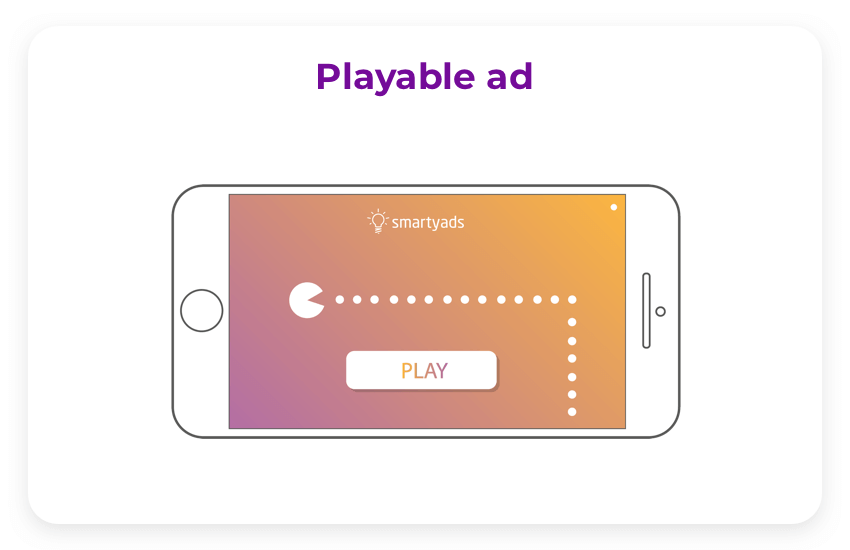 People are getting massively addicted not to their gadgets but to their favorite apps they use on a daily basis. That means the marketers and advertisers will have to shift their gaze at mobile apps that people use most of their time.

A remarkable mobile in-app ad innovation of 2018 became the ability to advertise in-app through offering the interactive demo version of the game, that Google once called "playables".
Playables already project 8 times better performance than previously leading interstitial ads. Such mobile in-app ads give the user a chance to “safely” try the products without any strings attached and without going an extra mile for authorization. 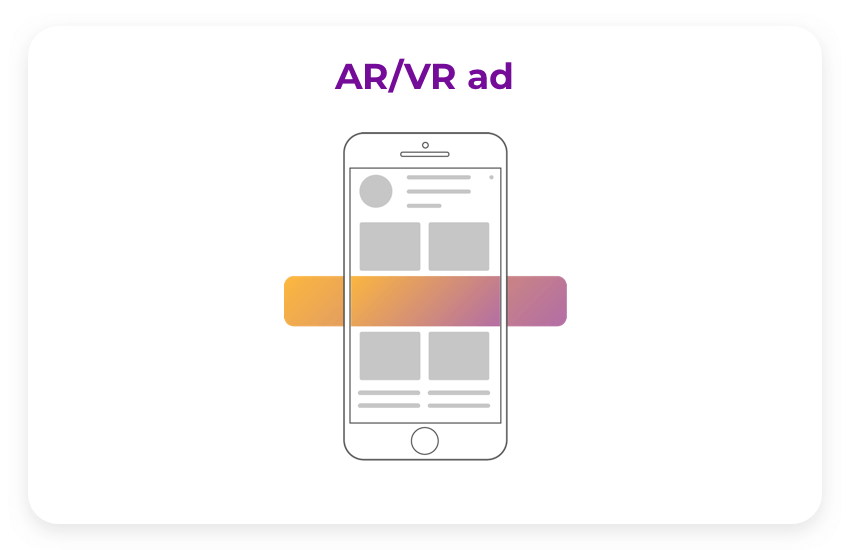 It’s estimated that in the nearest future the in-app advertisement will be heavily affected by the virtual and augmented reality apps because they help to appeal to the people emotionally.

It’s hard not to stay inspired by the ad campaigns like one served by Taco Bell that merged the user’s face with a taco, creating funny buzz effects that with a help of social media went viral and reached 224 million views.

In-app advertising market based on AR and VR technologies is only rising so it’s still not overused and there’s a great chance for the publishers and app marketers to plunge into the opportunity. For instance, the business may use augmented reality ad types that use user’s GPS or AR in-app ads with a marker, that require holding a mobile towards the printed ad to see the augmented world around.

This year, according to Adjust’s Fraud Prevention Suite ad fraud rate may double like it did last year when Click Spam 16% increased and fake installs grew by 20%.

In-app advertisement is brimming not only with click bots but also bots that simulate installations and targeted actions that make advertisers and app marketers pay more.

In such circumstances, brand safety will remain to be one of the most important concerns for mobile in-app advertising. The advertisers, ad networks, publishers, and ad exchanges will have to work together more closely to solve this problem, increasing transparency with GDPR and shifting to white-label blockchain fraud-resistant ad solutions.

GDPR will affect in-app mobile advertising the same way it affects entire digital advertising. Some marketers will have to find new ways to target their audiences without collecting the personal data of EU residents, the others will shift to the Blockchain ad platforms.

Blockchain platforms can provide a solution to problems associated with automated in-app advertising. Providing a full audit on every transaction or operation it ensures that every party gets access to the data and identifies every chain participant without the necessity to gather the personal data.

Theoretically, the result of GDPR standards implementation into the in-app advertising market must be a transparent advertising space, equally beneficial to all participants, including end-users, sites, and apps that will have to be adapted with opt-ins and tools for personal data management.

How to make in-app advertising work?

Choosing the mobile in-app advertising format is only part of your app campaign effectiveness equation.

Mobile in-app advertising might work out extremely well, a little less well or not well at all, all will depend on the additional circumstances such as targeting users, correctly picked for your platform ad format and size, ad placement, access to the right mobile ad network, and the bunch of other important factors.

In order to make the most of mobile app ads for the advertiser it’s important to learn who’s the target audience for in-app ads, and only then start targeting it using demand-side platform.

Mobile app audience. Typically, banner ads cost will be measured in cost per mile. Therefore, it is important for the application developers, app marketers, and advertisers to assess the number of mobile app downloads and currently active users (on the weekly/monthly basis).

Geography. It is important for the business to serve in-app ads to the relevant audiences. This task is determined by such factors as language, country or city. Any mobile ad format can be more effective if the developer provides such information to the advertiser.

Age, profession. Such information about your users will be valuable for in-app advertising as well. For instance, if the mobile app has been created for rating famous resorts, a hotelier or an advertiser who provides the yacht rentals will come to you.

Any information that can help boost in-app advertising conversion is extremely important, the more ‘inside the app user experience’ information advertisers get - the higher could be the price for the ad placement.

There’re lots of mobile ad networks and ad exchanges, but working with them could be troublesome for the developer in terms of in-app advertisement optimization.

SmartyAds supply-side platform provides specialized platforms that remove the problem with mobile advertising and targeting users. The universal access to various ad networks could be obtained in a single, convenient interface for running multiple ad campaigns where app marketers and developers can sell their inventory at the most competitive price provided by the real-time programmatic auction.

If you’re planning to monetize your mobile app with in-app advertisement think about ad format and placement that can make the advertisement noticeable, (yet not annoying), learn who’s your user, and choose an effective supply-side platform that will connect your mobile app to the best advertisers worldwide.

Leave your request and let us help you to monetize your inventory effectively! Also, review SmartyAds CPI advertising solution.