Recently Google’s Product Manager for Chrome Extensions & Chrome Web Store, David Li, announced that the company would be shifting from Manifest V2 to Manifest V3 as of January 2023.

While this update is going to significantly impact many extensions, ad blockers are the most vulnerable. Manifest V2 is the current platform used by extension developers to specify how their products work. It is based on the Web Request API, which sends all page information to the extension, allowing ad blockers to intercept a network request, scan its contents, and modify or block ads if it finds them.

Over the past years, this has made life significantly easier for ad-blocking extension developers, however, it also presents an opportunity for malicious extension developers to access user data. In an effort to combat this vulnerability as well as improve user experience, Google is introducing a “better” alternative, Manifest V3. Unlike Manifest V2 which uses the Web Request API, the V3 version uses a new API known as the Declarative Net Request.

With the new application programming interface, Declarative Net Request Chrome will no longer send the page data to the extension. Instead, the extension developers will have to set the rules which the browser is to follow if it finds certain elements in advance. For instance, the developers have to set in advance how the extension is to deal with an ad if found in a network request. 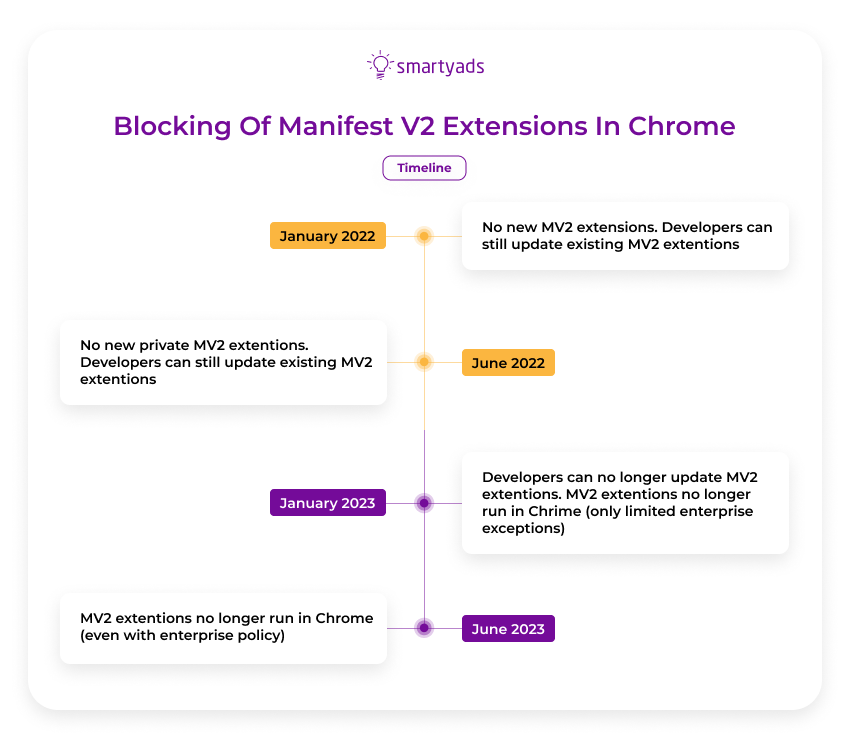 What Does This Mean For Ad Blockers?

According to Google, this shift will help extension developers, content blockers included, write extensions programs in a way that protects users’ privacy. Li says that doing this will protect the user’s data from malicious extension developers. However, on the other hand, developers argue that with the new iteration, it’s going to be quite a challenge to quickly and correctly identify ads.

The developers argue that using a new Declarative Net Request API will cripple their ad blocking capabilities. However, David Li insists that Manifest V3 will be modernized, so eventually, Chrome will work with developers to ensure that their extensions maintain their functionality despite the new update.

Why does Chrome embrace Manifest V3?

For Chrome, user experience and security are critical. However, Manifest V2 provided a loophole for malicious extension developers to abuse user data. Manifest V3 aims to eliminate the risk by providing trustworthy and safe extensions. In connection to Li’s statement, here’s what the newly launched Manifest V3 will be expected to promote:

Manifest V2 allows extension developers to host code remotely. This means Chrome cannot see the transactions going on behind the scenes. However, with Manifest V3 malicious developers will no longer use the remote host to evade Google’s antimalware tools. Additionally, Google will now review new extensions being submitted to the web store faster and more efficiently.

Manifest V3 is expected to give users more control over their data and the freedom to hide confidential information as they install new extensions. Page data will now be handled by the browser, significantly reducing the risks of user data leaking out to malicious extension developers.

Chrome has adopted two new approaches for its logic and API design. First, the Chrome browser will run a service worker in the background. This will allow extension features to work without a web page or user interaction. Manifest V3 will also employ a Declarative Net Request API which no longer requires extensions to process user data. These changes eliminate several unnecessary procedures, consequently boosting the speed and efficiency of the extensions.

Ad Blocking technology has always been subject to change. Different browsers keep changing their approach and politics, and you need to keep an eye on what’s happening. Sometimes, Chrome introduces new restrictions. For instance, usually by blocking ads Chrome tries to protect user experience as some ad units really interfere with normal browsing and content consumption. Still, it applies only for certain types of ads.

User experience is paramount and anything that may disrupt easy browsing needs to be scrapped off. This way, the user can enjoy seamless, normal browsing regardless of the device they’re using.

Working with ads that complement the user experience

If you keep up with native advertising trends you know that these ads don’t harm user experience, plus they are not visible to ad blockers. But first, what is native advertising? It’s a form of advertising where ads blend in with the media format in which they appear. In most cases, they don’t look like ads, and sometimes, the user navigates through them unknowingly. A good reason why native ads perform better is that they help maximize ROI while adding to the look and design of the website. More than half of the people who click on native ads intend to buy something. Here are the most popular native ad formats that you can advertise with on SmartyAds DSP:

Static or video ads are displayed within the app. They appear only for a few seconds when the user launches or closes the app. In-app native ads range from tweet posts, sponsored posts, infeed commerce ads, and much more.

These popular types of ads are normally placed at the beginning, in between, or at the end of the content feed. In-feed ads record enhanced traffic depending on where you place them.

Here, sponsored content appears at the bottom of the page or feed as a widget. “You might also like” “You missed”, and “Recommended” are just a few of the words used to introduce content recommendation widgets.

With SmartyAds self serve advertising platform, you can create non-intrusive, quality native ads that do not harm the user experience or privacy. Native ads can serve a variety of environments; from desktops, mobile phones, tablets, and CTV environments among many others. Native ad formats not only materialize your brand awareness, improve CTR, and maximize conversions; they also foster user loyalty since the ads will not interfere with user experience.

Chrome Push Notifications Block in Update 86: How to Deal With It?
Native Advertising Industry Trends and Spending
3 More Types: By Blocking Ads Chrome Improves User Experience. Time to adapt!
Advertising Challenges in 2020: How to Get Around Ad Blockers?