Ad fraud detection companies closely collaborate with ad tech businesses and this trend is not new. Investing their money in ad campaigns, advertisers and media buyers hope that they will receive only human traffic without any injections of bot traffic.

Theoretically, the advertising should be shown only to the target users. In reality, everything is slightly different and some of the impressions that advertisers track in their marketing analytics systems can be generated by bots or malicious programs. Mobile ad fraud and regular ad fraud can bring a lot of problems for marketers.

This problem needs some real-time solutions. Ad fraud detection techniques and scanners are designed to fix this problem and prevent it from happening on both supply and demand sides.

Let’s explore the landscape of modern ad fraud prevention tools and understand how they work, how to integrate them, and what is the difference between post-bid and pre-bid scanning.

To start off with, desktop and mobile ad fraud techniques can also be different, but the main idea behind them is to generate fake clicks, impressions, or any sort of conversion.

According to a study by Future Digital Advertising: Artificial Intelligence & Advertising Fraud 2019−2023, in four years without fraud protection tools, the daily cost of ad fraud will equal $100 million daily. For comparison, last year it accounted only for $44 million. 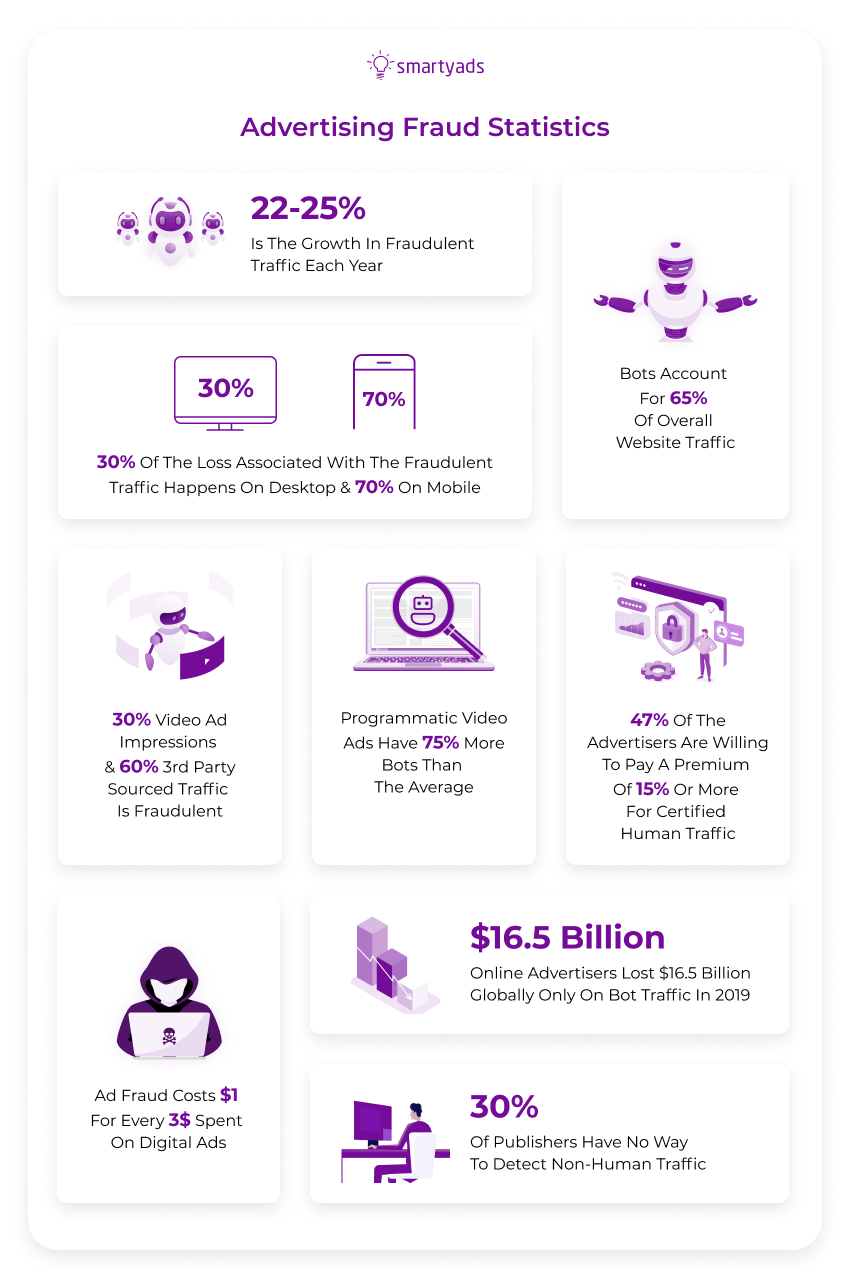 So, how do fraudsters benefit from ad fraud?

There’s always a chance that some players will try to overcome rules by resorting to the following types of digital ad fraud:

In order to get rid of all these malicious schemes, ad fraud prevention companies develop ad fraud detection techniques and scanners that now can be integrated into any kind of ad platform.

Fraud in mobile digital marketing is a frequent phenomenon and to protect mobile advertising campaigns, it's important to know how fraudsters work.

Ad fraud prevention. How the online advertising industry fights back

According to ANA (Association of National Advertisers), the estimated global economic damage from fraud in 2019 reached $5.8 billion.

In this case, the authors of the study recorded a downward trend for the first time and stated that the fight against fraudulent schemes is yielding results. In two years, the share of fake display ad impressions has decreased from 9% to 8%, and in video ads from 22% to 14%.

It happened after the broad introduction of ad fraud detection technology like Forensiq, Pixalate, TMT, IAS, and so on. DSPs and SSPs learned how to filter out suspicious or invalid traffic before the bid even takes place.

Thus, now clients can trust their programmatic budgets to platforms with early fraud detection systems that were developed only a few years ago. Additionally, in order to keep away from ad fraud, cybersecurity professionals also recommend adhering to the following practices:

Features and characteristics of the modern ad fraud detection tool

A good ad fraud detection tool can significantly reduce ad fraud by automatically banning suspicious impressions and bots at the stage of bidding or prior. Such fraud prevention tools can be installed on both supply and demand sides to achieve a synergy of action.

It identifies fraud before the ad is served at the stage of request. Such scanning tools monitor and sort out requests before bidding, that’s why their cost can be slightly higher. However, scanners filter out invalid traffic before it is counted as an impression which makes such ad fraud detection tools the most reliable.

It gives advertisers, agencies, and marketers an opportunity to investigate where a fraud source is at the stage of response. The tracking tags contained in creatives make it easy to understand which domains or creatives are fraudulent or compromise brand safety.

Such scanners work in real-time and detect pre-bid or post-bid suspicious activities, some tools can do both. However, this logic of fraudulent activity detection is intrinsic only to a certain type of scanners. Indeed, online ad fraud prevention techniques are highly diversified.

Pixalate is a supply scanner, supported by SmartyAds Solutions, and uses img pixels and all types of macroses for traffic scanning (which platform owners can select for themselves).

Scanner from Protected Media is also based on smart artificial intelligence and machine learning technologies for fraud detection scanning. It prevents fraud from happening before the impression takes place and post-bid gives insights into specific ad fraud sources. The scanner works for Connected TV, Display, and Video advertising.

Protected Media is a supply scanner but on SmartyAds Solutions it enables platform owners to scan traffic on SSP endpoints before DSPs reach it. You can easily prevent bad traffic with a scanner and monitor it with post-bid functionality.

Since we have an active partnership with Protected Media in place, you don’t have to negotiate integration with this ad fraud detection provider directly. Just make a request and in 7 days you will be able to turn pre and post-bid scanners in your system using SmartyAds credentials.

The Forensiq scanner is designed to mitigate affiliate fraud, traffic fraud, and abnormalities. It assesses every impression according to the proprietary fraud score metric and evaluates the potential viewability and brand safety score of the traffic source.

SmartyAds has recently partnered with Forensiq which means that the scanner is now available for your SmartyAds Solutions. You can turn it on in the dashboard, configure it in accordance with your needs, and generate regular reports to see how it deals with your traffic threats.

TMT scanner is a solution that focuses on ad fraud prevention on the demand and supply side. It offers fraud prevention, media filters for integration, malware attack data, creative and website quality assurance, customers hack prevention, and digital insights on fraud occurrence. TMT closely collaborates with IAB and the world’s largest media owners.

TMT scanner can also function in your SmartyAds Solutions but in order to turn it on for your system, you need to negotiate prior to installation. After this, you will be able to turn it on and set up the daily limits of scans (see the screen above).

The IAS scanners (stand for Integral Ad Science) are also featured among the best ad fraud detection companies for advertisers and publishers alike.

This company provides ad fraud solutions that are accredited by MRC for SIVT (Sophisticated Invalid Traffic) detection. IAS allows the delivery of verified inventory. The three stages of traffic verification they use are ad networks scanning, behavioral patterns detection on real devices, and malware check that will work across all traffic channels.

White Ops is a cybersecurity company; their solutions protect publishers and advertisers from the majority of threats associated with ad fraud. White Ops is one of the largest fraud detection companies that’s been in charge of protecting traffic of Oath and Adobe and other big ad tech industry players since 2012.

White Ops solutions are MRC accredited and can be used by advertisers and publishers who want to eliminate invalid inventory across environments (desktop and mobile) and verticals (especially in travel, retail and financial ones).

Making sure your SmartyAds Solutions is brand-safe and secure

We want to remind our clients that we collaborate with the world’s best ad fraud detection companies and regularly partner up with new ones to outsmart even the most sophisticated fraudulent schemes. We want to keep our publishers and advertisers as safe as possible.

Advanced cybersecurity scanners that we provide to you are focused on both ad fraud prevention and detection. Moreover, we offer API key implementation so that you could integrate any scanner of your choice and keep your traffic safe and secure.

If you need an individual implementation of any scanner, please be sure to notify us about your needs.

Ad fraud detection tools will not cease to develop as long as advertising space is plagued with bot traffic, ad click fraud, and fake views. Taking the fact that programmatic actively expands to new environments, e.g OTT/CTV or audio, in the future, the variety of ad fraud schemes will only grow.

Drive only real human traffic and quality impressions that translate into conversions at SmartyAds Solutions.

Written by
Iryna Sieliutina, Head of Content Strategy of SmartyAds
May 2020
rate this article
share with friends
Previous Article
next
8 SmartHub Updates You Should Get Your Hands on in May May 2020 Next Article
previous
What Is Brand Advertising and How to Start Branding Campaign? May 2020