Virtual Reality and Augmented Reality – The Way Ahead

Pie charts and bar graphs have, for long, been the staple means of presenting data for a long time. But now, fading into oblivion as technological advancements and innovation like Augmented Reality (AR) and Virtual Reality (VR) together with automation, and Artificial Intelligence (AI) is going mainstream and changing the ways of presenting data. The emerging technologies of AR and VR have enormous potential to transform the way we work and live as Augmented Reality, in particular, has moved beyond headsets and gaming and into industries like healthcare and manufacturing.

VR creates a world that we have so far heard and seen in science fiction books and movies only, that allowing users to explore environments created with computers to have an immersive experience. On the other hand, AR presents a view of the physical, real-world in which the elements go through enhancement with the help of computer-generated inputs. that range from graphics to sound to videos to GPS overlays and more. Although in the beginning, VR and AR made the maximum impact in the field of entertainment, industries are now coming forward to adopt it.

According to market predictions, the spending on VR and AR up to 2019 was projected at $16.8 billion, which will go up to $160 billion in 2023, a stupendous growth of 10 times in just 4 years, which highlights the growing popularity and widespread application of the technological innovations. It is essential to get some idea about how digital agencies are providing one of its kind digital experiences to their clients by embracing VR and AR.

AR finds varied applications in industries like manufacturing, telecommunications, utilities, healthcare, retail, and logistics as well as in the areas of maintenance and repair, assembly, retail showcasing, education, training, and diagnostics. Businesses are also exploring the possibilities of using VR, which till now remains confined within the domain of entertainment. The close resemblance of the technologies and the devices used for creating a world which we can perceive from a completely different angle is perhaps the reason why people not only talk about these in the same breath but also use the terms VR and AR interchangeably. However, these are not the same. Only by knowing the difference between the two, it is possible to understand what these technologies hold for us in the future.

What is virtual reality?

Virtual reality can create a world that is different from what we are familiar with and creates environments that take viewers somewhere else. Wearing the headsets or goggles is the way to travel to a different world that is a heady mixture of fantasy, sci-fi movies, and the real world, which are the stuff of sci-fi movies. Putting a VR headset over your eyes helps to escape from the real world and enter the one into a world of make-believe that will expand your senses by delivering hereto unknown experiences that are simply fascinating. Virtual Reality technologies like the Sony PlayStation VR, the HTC Vive, and the Oculus Rift, Google Cardboard, and Samsung VR are creating modern dreams of adventure and fun that are opening new horizons in entertainment. The attraction of VR goes up many more times as you can share and interact with other people within the virtual space.

What is Augmented Reality?

Augmented Reality allows you to be present in the real world embellished with virtual elements to enhance the experience instead of creating an imaginary world. Augmented reality does not replace your vision with something surreal, but instead adds to your vision by showing the environment where you exist. By wearing smart glasses like Microsoft HoloLens, you see everything in front of you as if you are wearing a pair of weak sunglasses. The technology keeps projecting images upon whatever you see through the glasses. Smartphones with AR apps use the camera of the device to capture the surroundings of your current location and overlay additional information on it that appears on the screen. Unlike VR, the technology of AR does not entirely cover and replace your vision but only project images within a limited area in front of your eyes.

Since consumer headsets hit the market some years ago, there has been a steady adoption of VR in homes, still, application developers are yet to come out with the killer app that we have been waiting for. However, some significant developments are on its way that will help in making the technology more affordable for users by overcoming the limitations of the previous headsets. To have the best experience with VR, users needed to tether to some expensive computer that limited the mobility of users as well as the sense of immersion. Another option to control stand-alone headsets was low powered mobile technology, which affected the quality of graphics and hindered the sense of immersion.

Both Oculus and Vive are now coming up with powerful stand-alone headsets equipped with dedicated computer technology. This will liberate users from the trailing cables that hinder mobility and even put behind the low powered displays by creating more accurate and realistic simulations of our real-world within the virtual world. It would ensure a more immersive experience that will add much more realism to the games created with VR.

Besides aiding mobility, the new headsets will include features like an increased field of view and eye-ball tracking technology that will enhance the virtual experience, thereby allowing users to interact and experience more naturally. AR finds its way into automobiles It will still take some more years for fully autonomous cars (Level-5) to become a reality, but carmakers have plenty of other options to enthrall users by using AI and AR. The use of voice assistants in vehicles is now a reality, with most automobile manufacturers implementing the use of Siri and Alexa and using AR in vehicles. By using the powers of machine learning, Nvidia has created a Drive AR platform that uses a dashboard-mounted display of camera footage of the surrounding environment of the car overlaid with graphics pointing out everything from historical landmarks to hazards on the way. Leading car manufacturers like Mercedes Benz, Audi, Toyota, Volvo, and Tesla have all come forward to use the technology.

Another future use of AR in cars is likely to happen from the project undertaken by WayRay, a startup backed by Alibaba that would display the AR data on the car's windshield, giving right-of-way information, navigation prompts, hazard detection and lane identification. Using AR in cars has the potential to enhance safety as drivers will now be able to keep their eyes on the road while reading feedback and make driving more comfortable and convenient.

Use of VR and AR for training and teaching

Both Virtual Reality and Augmented Reality have enough scope of use in education. Environments created with VR allow students to practice a wide range of activities from surgery to flight to construction without the associated risks of training in the world. By using augmented environments, students can access real-time information on best-practices, objectives, and hazards. The use of Oculus Go headsets by Walmart to train its employees in skills ranging from customer service to compliance is a case in point about using VR for training. The retailer is also deploying VR for training employees in learning new technology by simulating real-life conditions in virtual environments. They are learning to use the new automated vending machine Pickup Tower in virtual environments to get a feel of how it will be like in real life. The US army is also set to use Microsoft's HoloLens technology for military training that enables trainees with real-time readings about their environments.

Both VR and AR have amply proved its worth in reducing risk and training cost, and it is likely to a higher rate of adoption of the technologies across industries that work with expensive tools and equipment or operate in hazardous conditions.

The use of augmented reality in healthcare has created path-breaking experiences that range from training medical students in AR environments to improving interactions between medical professionals and patients by enabling telemedicine options. The application of AR is especially notable in critical situations because AR-based applications can deliver real-time information related to the treatment area that leads to better diagnosis, surgery, and treatment plans. A typical illustration of the use of AR in healthcare is in the use of a handheld device AccuVein that can scan the vein network of a patient that reduces escalations by almost 45%. The information helps surgeons to plan procedures confidently, and diagnosis becomes easy by creating models of tumors. It is even

Even it is possible to create models of disease conditions by using AR. Businesses are also using VR for proto-typing and design through simulation and testing of every characteristic of a part, mechanism, or process which breaks the myth that the hype about VR revolves around its use for entertainment only. Instead, it is now becoming clear that VR, too, can impact every field of business. 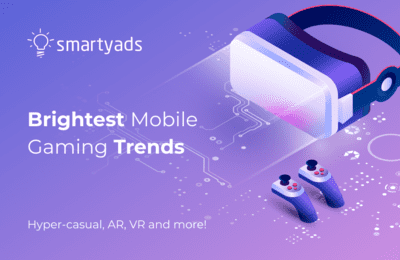 Mobile Gaming Trends 2020: From ‘Hyper-Casual’ to AR
Previous Article
next
How to Get the Most Out of Your Smart Hub Platform February 2020 Next Article
previous
3 More Types: By Blocking Ads Chrome Improves User Experience. Time to adapt! February 2020