The rapid adoption of connected television viewing is one of the changes induced by the COVID pandemic. People have discovered that watching television and other media content across various devices, at any time and on the go, is more convenient. 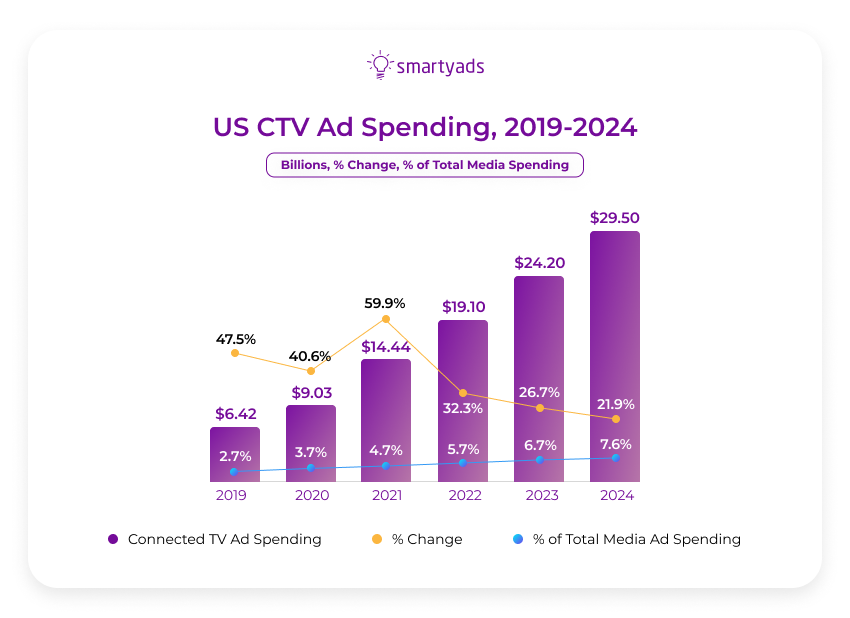 While the projections are still positive as the CTV advertising inventory offers increased possibilities and remains in demand for brands, there is also the problem of ad fraud. According to projected estimates, connected TV fraud would cost publishers $144 million in 2022. Another report suggests that it would be even worse for marketers, who are supposedly losing $20 million each month on the same issue. And while 2020 was thought to have the worst fraud cases, 2021 was even surpassing it.

It's hardly surprising that connected television ads have been a popular target for fraudsters. They have one of the highest CPM rates in the digital advertising market, ranging from $35 to $65 per thousand impressions. The CPM rates are high because such ads provide additional value to brands, attract new audiences, while helping publishers increase engagement.

However, because advertisers are spending more money on CTV campaigns, these investments now attract bad actors. Mark Zagorski, CEO at DoubleVerify, points out "the more premium an inventory, the more likely it is to be targeted by cheaters."

Connected television fraud seems alarming because inventory purchasing here works quite differently compared to other methods. Its operations are multilayered and fragmented. Advertisers have various options for purchasing inventories, and there are lots of players within the connected television advertising ecosystem. This sometimes leads to complexities.

DoubleVerify, a digital media measurement and performer tracking platform, recently revealed a sophisticated invalid traffic method that used wallpaper apps to create false impressions. When a user installs a wallpaper program, it begins to imitate the ad watching even when the mobile devices are inactive. DoubleVerify, with its team of data scientists, analyzed more than a billion ad impressions per day to identify ad theft and injected ads.

It is becoming easier to commit ad fraud on connected television channels because of the absence of robust tracking and measuring functions on many CTV advertising systems (when compared to other digital advertising methods). Expert analysis of unprotected programmatic inventory revealed that over 6% of online video advertisements and 18% of CTV ads are fraud.

Below are some popular examples.

TV advertisers mostly employ SSAI to serve ads to an audience. Doing this enables promoters to embed their ads into the content, usually an online video. With this, fraudsters can obtain access to servers and give false data to deceive brands. Brands end up paying for low-quality impressions or fake views.

In an exposed scheme codenamed "ParrotTerra," fraudsters set up fake SSAI servers to supply counterfeit inventories to advertisers. This operation was spoofing over 3 million hijacked devices every day.

This is a tactic in which fraudulent elements use only one device to imitate multiple devices to serve ad impressions. They simply impersonate other devices or operating systems to commit fraud.

In 2020, a bot dubbed Pareto was used to spoof over one million Android devices. The bots replicated real ad view actions, seeming like real people were viewing the ads on various CTV devices. It is reported that this bot generated over 600 million bid requests daily.

DV's fraud lab discovered the first device spoofing scam, called SneakyTerra, in late 2020. Cheaters could intercept genuine devices and grab CTV impressions. According to estimates, over 2 million devices were spoofed per day. Marketers lost a lot of their ad dollars in 2020 to the two streaming fraud schemes.

Using this method, fraudsters spoof gadget by impersonating its IP address to generate false impressions and fraudulent traffic. In a reported ad fraud scheme (ICEBUCKET), bad actors spoofed the IP addresses of multiple devices across 30 countries while fooling promoters into thinking their ads were served to real people. The scheme was generating over 1 billion ad requests daily. It was actually bots faking CTV traffic and stealing ad money.

SDK spoofing is a mobile fraud scheme that imitates installs using data from genuine devices without executing any real app install. Malicious program uses a real gadget to fake installs and to take advantage of an advertiser's budget.

In 2020, DoubleVerify discovered a fraud scheme dubbed CelloTerra. With this bot, fraudsters used mobile apps to simulate traffic, steal data and run background ads. The basic flow of the multiTerra bot was as in the picture. 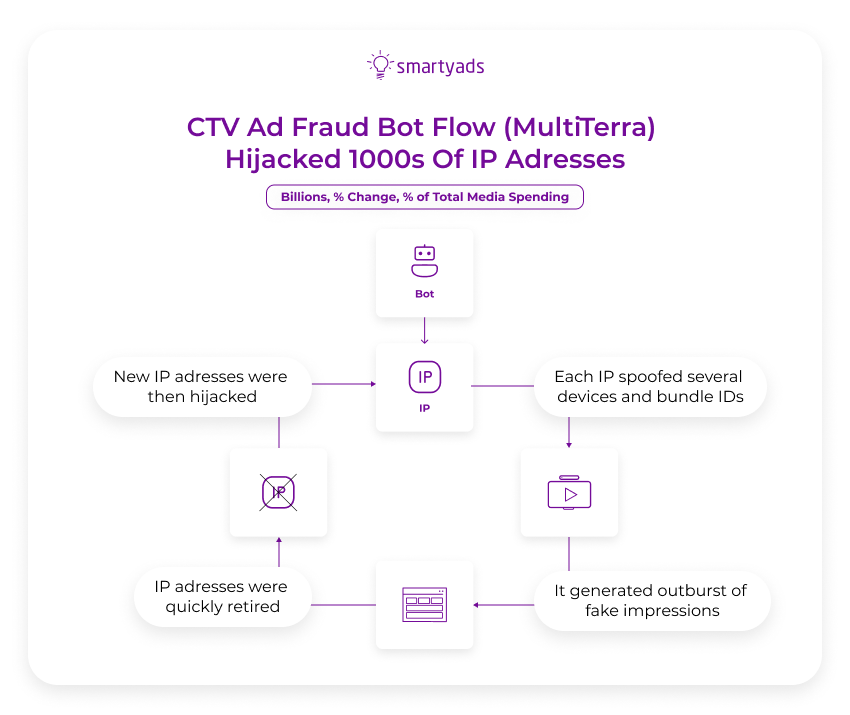 Due to the inherent risks related to CTV inventory, the responsibility to prevent fraud lies on brands and media buyers. Without a doubt, the CTV ecosystem is susceptible to sophisticated bots attack, thus brands must be diligent.

The interactive advertising bureau (IAB) 2018 released the Identifiers for Advertising standard. The IFA is particularly great for the connected television as it allows CTV devices to have unique identifiers. Embracing other IAB standards like the app-ads.txt by ad platforms can additionally eliminate fraud.

Not every ad tech partner has the capacity to detect fraud on CTV. They may be efficient with other ad categories, but because of the peculiarities of connected television operations, your partner may lack the relevant CTV fraud detection tools. That's why always ask beforehand if the advertising platform has all the tools in place to monitor CTV traffic quality like SmartyAds DSP.

There are also ad fraud detection tools that your advertising vendor can connect to. The right protection tool promotes greater confidence.

While eliminating fraudulent activity in the CTV space may seem like a utopian dream, there are still plenty of things that can be done to lower the risks and prevalence of fraud in the ad tech industry. With technological advancements, you can choose a reliable advertising platform that makes ads on CTV more transparent and accountable.

Advertisers and media buyers can benefit from reliable and proven traffic sources on SmartyAds DSP.

What is ad viewability and how to improve it?
The New Standard of Programmatic Security: ads.txt
SmartyAds partners with Forensiq to combat fraudulent inventory