CPM vs CPC: Which Is Better Choice for Advertisers and Publishers

In the digitized media-trading environment, advertisers and publishers are making important financial decisions on a daily basis. One has to determine lots of things including clear goals, as well as more specific details, such as choosing the right platform or pricing model. It is important to pay attention to every detail while planning your advertising strategy, so today we are going to focus on bidding options.

There are several pricing models commonly used in programmatic advertising. These include CPM, CPC, CPI, CPA and many more, so at first, it might seem not so easy to define which online ad models are best. In this post, we are going to focus on the most popular ones, CPC and CPM, and will try to evaluate which one is better to apply according to your goals and strategy.

Let us first start with definitions - both CPM and CPC are payment options that define how much money you are going to spend and what you will get for it. The main difference between CPC and CPM lies in cost, how it is calculated, and what kind of factors your ad pricing relies on.

CPM stands for “cost-per-mille” (where “mille” is a Latin word which translates as “thousand”) and means “cost-per-thousand”. In practice, this means that the price depends on the number of impressions served and is calculated per 1000 impressions. If advertisers buy an ad for $10 CPM, they’ll need to pay once the ad is viewed a thousand times.

CPC is an abbreviation for “cost-per-click” which means that the publisher receives money for every click user performs. This way, ads that are only viewed by users, but not clicked upon, are served for free. This model is entirely different from CPM, as different ads can be priced differently depending on their efficiency. So, for instance, with CPC advertisers will have to pay the price of $1 per click (let’s say on the costly resources), as soon as the advert gets 10 clicks, impressions are over. So, $10 dollars for served clicks must be paid. With $10 CPM advertiser gets 1000 guaranteed impressions, no matter how many clicks they are able to generate.

When CPM is best option

To make a well-informed decision and choose between CPM vs CPC advertising, one should consider the pros and cons of each pricing model and estimate which would suit the needs and goals more precisely.

CPM is a good option for advertisers who want to drive brand awareness and engagement. By using this type of pricing, advertisers can ensure that the ad will get impressions they’ve paid for. This works great when the primal goal is to increase brand visibility, especially if the ads are highly engaging, as the cost won’t change if the number of clicks increases. It can also be a good option for advertisers who are only starting to explore how to increase their CTR and want to analyze which color, design or message works better for their campaigns. Apart from this, CPM provides a great opportunity to test targeting strategies by choosing specific websites and measuring CTR while paying the same price for each campaign.

To understand the concept better, let’s have a look at the following example:

For a budget of $100, an advertiser can buy traffic for $1 CPM and receive 100 000 impressions. The profitability of this decision is now defined solely by the effectiveness of the creative itself and chosen targeting options on the advertiser’s DSP. If one ad has the click-through-rate 1% and another one gets 4%, this means that for the same price an advertiser gets either 100 000 or 400 000 clicks respectively. So to get the most out of the CPM campaign, one should aim for as high CTR as possible. 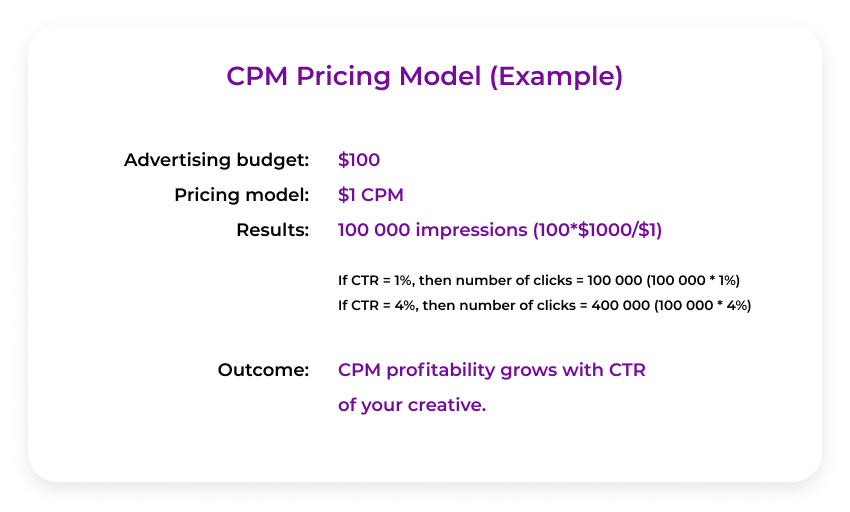 When CPC is the best option

To fully understand the difference between CPC and CPM, we should now turn our attention to CPC and identify what are the most appropriate conditions for this pricing model.

One of the most suitable objectives for CPC-based campaigns is to drive conversions, as well as retargeting campaigns. These can be oriented on sales or simply website visits, the main point here is that advertisers have to pay only for clicks on their ads. This way, the price doesn’t depend on users who have seen an ad but never took further actions, such as clicking to learn more or making a purchase. As with CPM, it is in advertisers’ best interest to use the most attractive ads for their campaigns, but with this pricing model, they won’t have to pay for ineffective ads. While planning a budget, advertisers can estimate how much money they’ll have to pay for the exact number of clicks, so usage of CPC bidding can certainly give some stability.

If we come back to our practical example, a similar situation with CPC looks like this:

An advertiser sets a budget of $100 for a campaign and chooses, for instance, $0,05 CPC as a pricing option. This way, the whole sum will be paid only when an ad receives 2000 clicks no matter how much impressions it takes. This model is especially useful if one is uncertain about traffic quality on the ad network, as it ensures that the money will be spent only on real users who click on the banner. 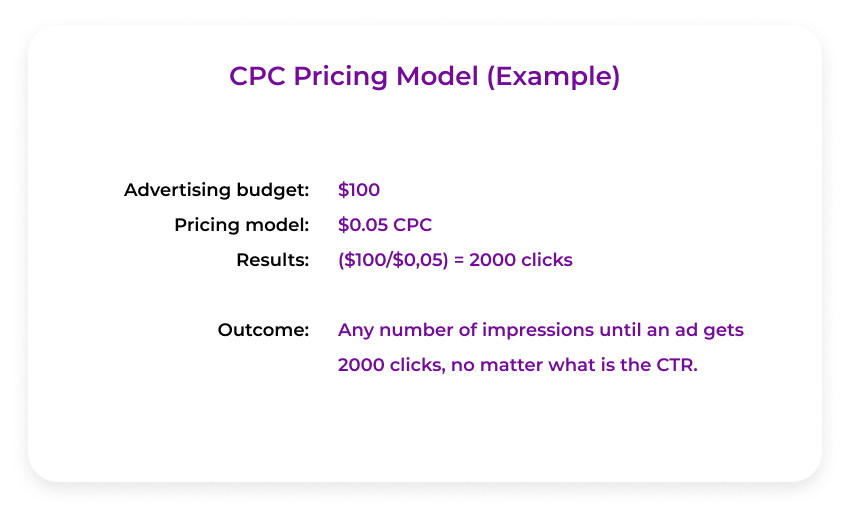 One can only evaluate the usefulness of advertising practice after consideration of both positive and negative sides of it. Let’s take a look at what are the possible downsides of CPM that one might encounter.

The main problem with CPM for advertisers is that they’ll have to pay for every 1000 impressions even if their ads haven’t received any clicks. If one sets ineffective campaign and their creatives are simply not that engaging, one can end up paying for ads which no one clicks on. Moreover, it is also possible that the impressions are counted from bot traffic, so an advertiser might even be charged for an ad that no one even viewed. This model can be risky for those who aren’t convinced that the traffic on their platform is good or for those who use poor-quality creatives.

To overcome this barrier, a wise advertiser would give it their best shot and optimize their campaigns so that their ads would get lots of clicks. This way, it is possible to get lots of conversions for much lower budgets compared to the usage of CPC. Another method to deal with this problem is to use a frequency cap in order to limit the number of impressions in order to avoid advertising fatigue.

The cost-per-click pricing model also has its downsides, even if an ad campaign is otherwise perfectly optimized.

The thing is, CPC brings much higher risks for publishers, as their income depends on how well advertisers did their job. If the ad doesn’t get a certain amount of clicks, they may end up displaying this ad for as much time as it will take to get those. The CPM bidding, therefore, is a much safer option, as the publishers get full control over their inventories and the income they can get through the SSPs. As for advertisers, there is some risk for them as well. It is easy to get distracted by high click-through-rates, but what if those clicks won’t actually bring conversions? This means that the advertiser ends up paying tons of money for clicks but won’t get any revenue. The only way to overcome this problem is to make sure that the clicks actually lead to purchase and the users aren’t disappointed by the actual offers once they click on ads

How to choose between CPC vs CPM

As we can see both CPC and CPM pricing models have their upsides and downsides in different circumstances. However, after taking into consideration the specific campaign’s goals and expected results, the choice should not pose any problem.

At SmartyAds we provide an opportunity for publishers and advertisers to work with the CPM model and thoroughly optimize each campaign to let it reach the highest profitability. Sign up at SmartyAds SSP, if you are a publisher to make the most out of your inventory. Or try our new SmartyAds DSP for advertisers and build a perfect advertising strategy supported by our professional team.

Contact us and start your journey to the world of media buying with SmartyAds!