Mobile apps took over the world: it seems like every developer has focused their attention on the mobile ecosystem. The trend has gone so big that even social media giants like Facebook, Instagram, and Twitter, seeing in apps a path to better user engagement, decided to make games a part of user experience. Mobile gaming became the fastest growing niche among other applications with an estimated $2.5 billion worth (2020).

Naturally, profit is the main purpose of every app functioning, even of those that come free and leverage indirect monetization tools - in-app purchases or mobile game ads. Since mobile market competition is extremely high, developers are looking for alternative ways to monetize their apps.

Game advertisement as a most effective tool for this task can offer developers myriads of new opportunities. Let’s go ahead and find out what ad formats will be commonly used in mobile games by 2020 and how to use them in order to provide your potential customers with additional value.

Advertising in free-to-play and freemium apps

Mobile game ads may be implemented in the game in numerous ways but let’s recall what is the difference between freemium and free-to-play games first. Freemium is a classic try-and-buy model when a user downloads a game for free, and then has the opportunity to buy the full version for it. Free-to-play is the most popular model among social games. It is also free but along the way, the user must make in-app purchases to access new opportunities and privileges.

In both cases, you can season user experience with a mobile game ad so that it indicates the path that leads to the upgrade. Another great practice is giving the user an option to play games without ads (for a small fee) or integrate rewarded videos that help to gain in-game bonuses in exchange for ad watching. 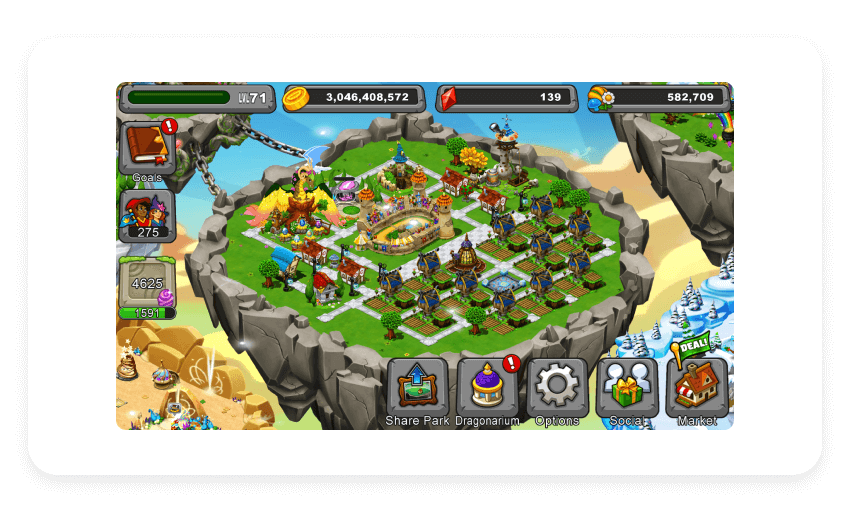 If you’re looking for the answer to “what’s better, dynamic or static mobile game advertisement?” question, there’s no simple answer. The price segments and the tasks they perform can be drastically different. While interactive solutions are well suited for promoting complex products, like e.g new games and apps (playable ads), traditional static ads are more suitable for something more common.

Both static and dynamic units can coexist quite well and even work in a single app. Interactive mobile ad formats can be used as bait, and traditional game banner ads as a destination this bait leads to. In order to make the user experience seamless and streamlined, app developers need to carefully plan each interaction of the user with static or dynamic creative.

Most popular dynamic ads in 2020 will be playable, rewarded, in-game videos and advergaming. Game banner ads will still be among the leading static formats along with static info bites that you can find displaying on the billboards in games (see below). 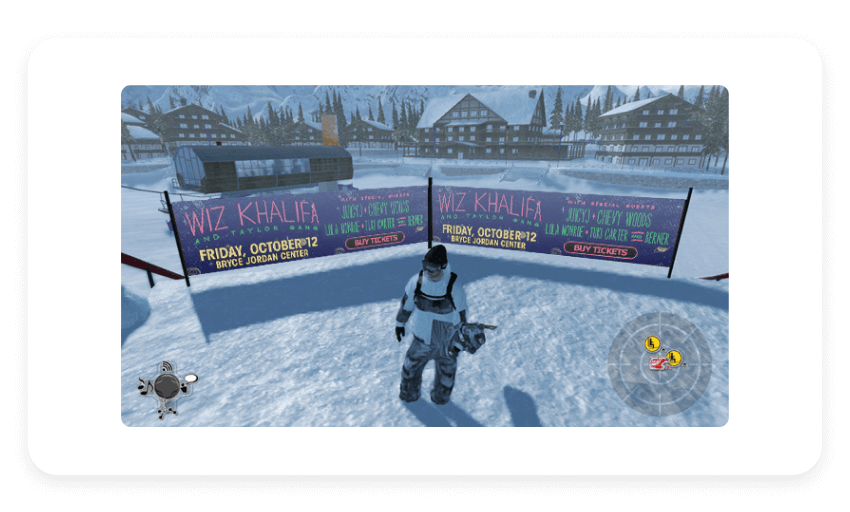 The playable game ad unit suits well both IOS and Android platforms. This ad format motivates the audience to interact with a featured button "try the gameplay." After clicking, the user plays the demo version of the game, at the end of which a call to action appears - “install the game in the AppStore or Google Play.” Users acquainted with the gameplay want to continue playing in the full version which explains the effectiveness of the format. Proven to deliver 8 times better performance than usual ads, playables will remain to be increasingly popular in 2020. 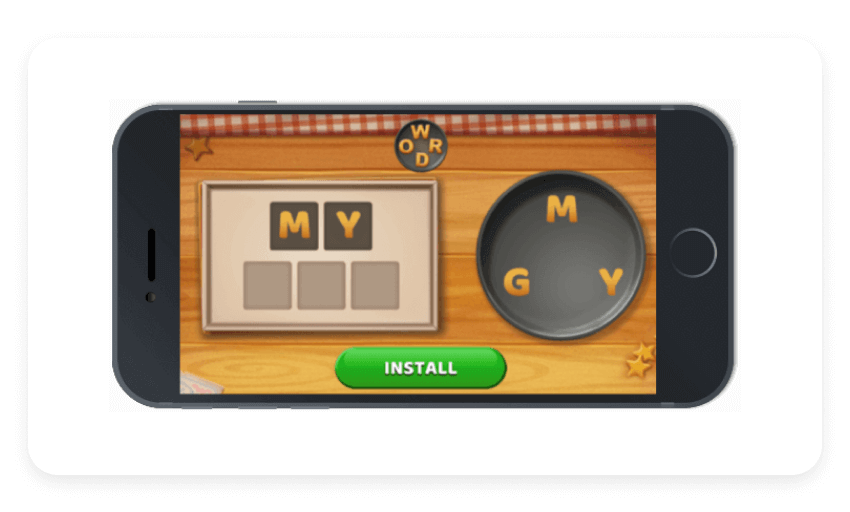 The rewarded video looks naturally in the app’s content and can be embedded in various functional parts of the game menu. These online game ads reward players in exchange for ad watching. An extra life, a hint, additional items, and functionalities are just a handful of incentives that developers can apply as game bonuses. Rewarded videos don’t distract users from gameplay and provide additional values. This translates into much better user loyalty, engagement, and eCPMs on a $30+ level. 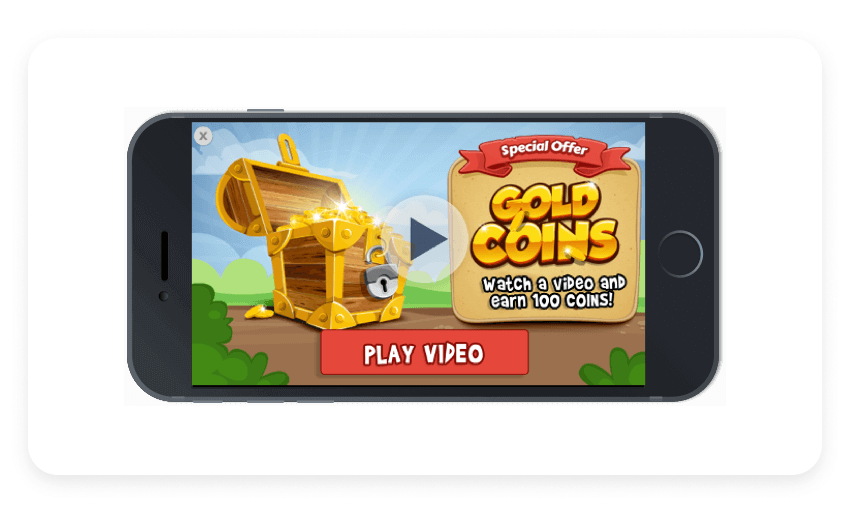 IAB’s Native Advertising Playbook identifies six main interactive formats that are currently used in native advertising. The native banner has several reasons to be the most popular one. Typically, the task of the native teaser is to attract attention and encourage the user to click and follow advertising landing in detail. It may look like any other functional elements of an app, it is non-intrusive and generates 20–60% better engagement indexes than other ad formats. 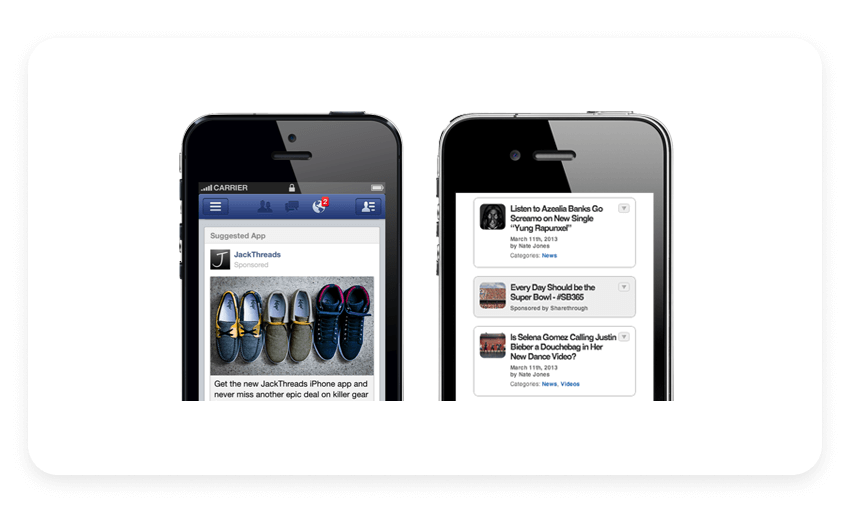 Apart from rewarded and playable, popular in-game video ad formats also include interstitials. Unlike traditional static advertising formats, dynamic video mobile game ads have a full-fledged scenario according to which they unfold. This scenario combines visual, audio and textual types of information, which interact with users at several perception levels at the same time. Interstitial ads are full-screen formats that must be shown either at the start of the game or after some logical interval (e.g transition to the new game level). 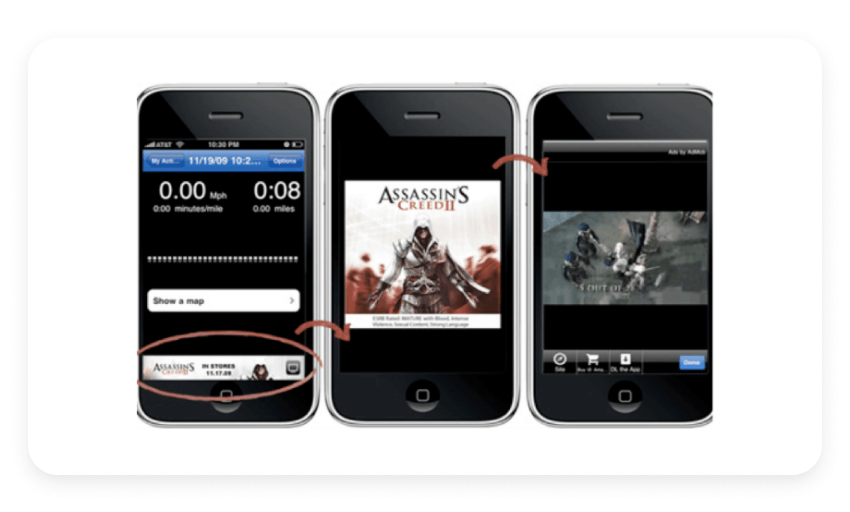 The concept of advergaming is relatively new. The idea behind it is to wrap around promotion the whole application experience. Such mobile game ads are the most expensive because they are typically developed from scratch in order to show product and service in detail. Another, more affordable option of advergaming is when the company pays for placing the ad inside of the already well-known commercial game. Thus, for example, Chupa Chups advertisers across variety of mobile games, including Angry Birds and Amiga Zool.

One of the main downsides of the interactive ad formats is that they are labor-consuming. Some dynamic video ad formats may also appear as more expensive as long as a media player on site occupies large space. In this regard, static ad formats will be more affordable. At the same time, CPM of interactive formats is usually higher. In this regard, it will be better for the brand to test the static ad format along with interactive and compare their effectiveness and ability to achieve particular KPI. Test different creatives for different audience segments. The more personalized will be the creative the more chances the users will react and convert.

It’s also hard to underestimate the significance of ad personalization for app developers. The more users will view, click, or convert in the app - the more commission app publisher will be able to obtain. Ad personalization is a reason why app developers chose programmatic supply-side platforms for game advertisements like SmartyAds SSP. Such platforms connect publishers with global advertisers in real-time due to which publisher achieves superior yield growing opportunities.

In the in-app environment, ad serving is implemented via a lightweight mobile SDK. The advantages of the direct SmartyAds SDK integration for publishers is in ease of integration, partner of management, and latency-free user experience for all kinds of ad formats. With our developer-friendly SDK solution, developers can monetize their apps using innovative dynamic and static ad formats on IOS and Android platforms.

Apply the most innovative tools of monetization with SmartyAds. Tell us how we can help!

Trending In App Advertisements: Playables, Video and Native ad Formats
Is It Worth Turning to In-Game Advertising?
How to Monetize an App with 5 Effective Strategies
Everything You Need to Know About Mobile DSP