Second-price sealed-bid auction it’s something the world has been experimenting with for a long time, but only the last year has given it a giant breakthrough. In 2019, the second-price type of auction is still safe and sound since it’s used by the majority of buyers and sellers worldwide. However, as Google announced a move to first-price auctions, more publishers and advertisers refuse to put all eggs into one basket and take a course to diversification.

Google moves to first-price: but not as a first one

Since the dawn of programmatic advertising, ad tech market has been running on 2nd price auctions, including Google Ad Manager and Ad Exchange. Initially, 2nd story auctions were technically better adapted, but as time passed, it appeared that it complicates an understanding of the result.

“This confusion results in a situation where advertisers and publishers fail to understand the true value of the inventory sold programmatically,” adds Sam Cox, Group Product Manager, and Google Ad Manager.

The complexity of programmatic auction models makes operational management very difficult to perform which stays in the way of understanding if certain aspects of trading require improvements or not.

The first-price auction makes revenue formation and distribution mechanism easy to grasp. The news is, it's not new. In fact, according to the IAB, it has been a preferable model used for header-bidding auctions since 2017 in the U.S and APAC.

So, how has the first-price managed to outrun the second-price auction model so quickly? As indicated by experts, essentially the model is focused on delivering better transparency. It's not supposed to modify the income that buyers and sellers receive fundamentally. If price floors are adjusted correctly, however, the publishers may see a positive effect on earning. Let’s start with the basics to understand how everything works.

Second-price auction: how it works

Here is a second-price auction example. Let’s imagine there is an RTB auction. One ad impression becomes available. Three buyers participate in that auction. The buyer X bids $0,5 the buyer Y bids $1 and the buyer Z bids $2 for that impression. The winner of the auction is the buyer Z. However, according to the rules of the second bid auction, the buyer Z would pay $1.01, one cent above the second-highest bid, instead of the initial $2. 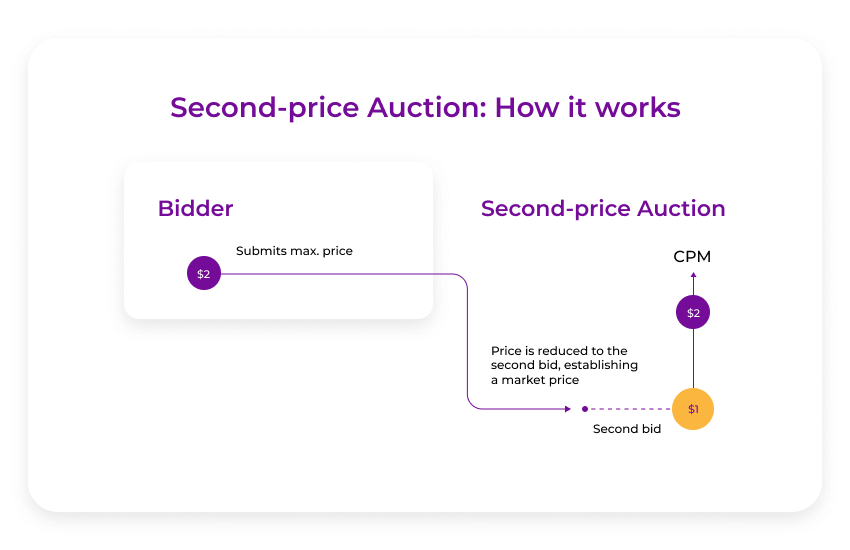 First-price auction: how it works

With first-price auctions, things are much clearer. If the buyer X bids $0,5, the buyer Y bids $1 and the buyer Z bids $2, the impression will still go to the “highest price offered” aka bidder Z. However, in a first-price auction scenario, the buyer Z would have to pay the exact price that was in the bid response: $2, unless the difference is not evened out by bid shading. 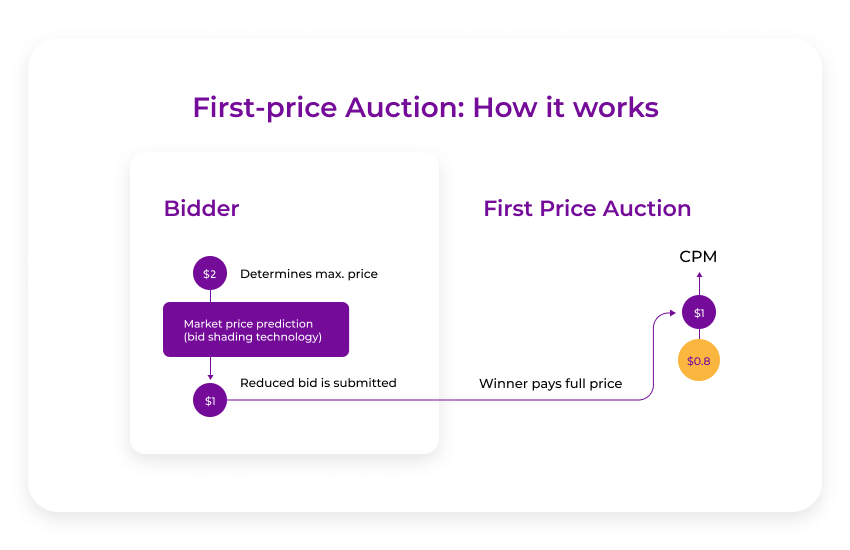 The difference between generalized first-price auction and second-price model is defined by how exactly the winner pays. Thus, different situations require different bidding strategy according to the game theory.

In any trading, including those on real-time bidding platforms, the sellers are interested in receiving the highest price, and the buyers are interested to pay less. The point where the mutually acceptable agreement happens is called a ‘clearing price’ which is different in various auctions.

The clearing price for the 2nd price. In a second-price auction, the winner is supposed to pay the cost of a second winner or the price floor established by the publisher (depending on which price is higher). The gap between these two can reach 50%, but the limit defined for such situations helps to restore a particular share of money.

The clearing price for the 1st price. In first-price auctions, the price floors are not directly affected by the auction prices. However, they may influence the behavior of the buyers. With the first-price auction, advertisers have no power to influence the highest bid price since the price will not drop to the second highest. To prevent advertisers from overpaying, the initial price undergoes a correction the product of which is the initial winner’s rate reduced to a level below the ‘maximum possible.’ Buyers should evaluate what the second largest price will be, and adjust their price accordingly. This method has gained recognition in the ad tech world as a ‘bid shading’. 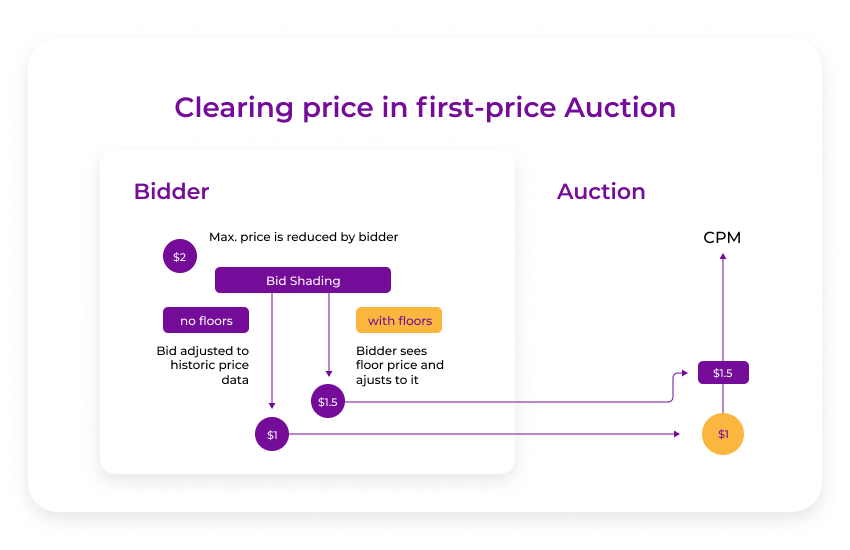 The first-price auction as a future of header-bidding

In 2019, the first-price auctions are almost entirely prevalent in header-bidding auctions, including ones designed for mobile and in-app.

Emarketer statistics point out, non-second-price auctions have grown 9 times from Q4 2017 to the first half of 2018 in the U.S, and the same trend is expected to arrive in APAC countries in the near future. The combination of first-price transparency and simultaneous bidding opportunities delivers higher chances for the publishers to maximize the inventory value and gain higher yields.

At the same time, a good half of all auctions (including header-bidding ones) are still running on second-price models. The explanation is simple. The first-price auctions make more sense in case advertisers know the actual market value of the impression and know the dynamics of soft and hard price floors applied by publishers.

Very soon, buyers and sellers will have to change their pricing strategies in order to adapt to the new dynamics of auctions. The publishers and app developers may need to rethink how they use the floor prices, and which partners they need to connect in order to adjust their inventory rates.

How to choose a price auction model?

As ad tech market is in the middle of transformation - it is recommended to run several tests in order to determine the best working auction you need to apply on the demand-side platform or supply-side platform.

So far, there’s no evidence that second-price sealed-bid auction is moving away, still, as market moves to the first-price model, many publishers reconsider how they set the floor prices. Today, many publishers are trying to minimize the revenue gap between the floor and the clearing price. As a product of this, we witnessed the rise of the soft and hard price floors that turn auction model into a hybrid.

Since October 2017, SmartyAds is a part of Rubicon Project initiative that supports first-price programmatic auctions. We strongly believe that first-price auctions create a fairer and more transparent programmatic ecosystem, increase bidder’s reliability and empower a more trustworthy environment for demand and supply partners.

We give our partners time to adjust to the new auction strategy and choose an auction model that works best for them. As a part of transition stage, we offer SmartyAds dual auction® empowered by machine learning that caters both first- and second-price auctions.

"SmartyAds offers both auction models to its clients. Best-performing ads, premium placements, and top ad formats would be presented at first-price auctions, and the rest of inventory will go to the old-school second-price auctions. We don’t want to rush our clients to shift to a new auction model. We let them see how both models work, compare and make conclusions. AI will be a huge part of this transition, and we want our clients to get used to the machines making decisions.", says Ivan Guzenko, SmartyAds CEO.

As the world goes first-price, it is essential to understand that second bid auctions will still be there tomorrow. Definitely, the role of price floors will change that will redistribute the incomes accordingly, adding up to the publisher’s opportunity to attract better yields. First-price auctions will help advertisers receive a clearer picture of auction dynamics, and most importantly, prevent confusion. The publishers and advertisers should strive to implement reliable processes and technologies for testing and continuous evaluation of CPM optimization results.

SmartyAds Dual Auction® is an auction model that involves both first-price and second-price auctions options. From October 2017, SmartyAds signals to all bidders what kind of auction they participate in their bid price – either first-price or the second-price auction. Such a hybrid model does not force bidders to participate in default first-price auctions only, but rather have the freedom to choose. We suggest our clients test three types of RTB auctions: first-price, second-price, and dual-price. When trying different auction models, advertisers and publishers can better understand which approach brings higher revenues and more value to their businesses.

Get an opportunity to trade in various types of auctions anytime! Contact us to find out more!