According to the statistics, the average person is more willing to browse through the webpage if it has a video on it. Furthermore, 73% of people say that they are more interested in purchasing the product if they watched the video about it before. This is probably why 73% of marketers also claim to receive a much higher ROI out of serving video ads.

If you want to run video ads — and you do; videos are an effective advertising medium — then you need to know the basics.

In order to make informed decisions, both publishers and advertisers need to understand VAST vs VPAID, the capabilities and limitations of each, and how these digital ad formats interact with the video content and video players. In order to monetize video content, publishers need to select the video player that will playback the content and choose the ad server (or ad network) that will deliver video ads. What benefits do these video standards provide to publishers and advertisers, what are the differences between them, and how to apply them correctly? It's time to find out.

How VAST and VPAID tags came to the scene

In 2008, digital video advertising was only gaining strength. There were a huge number of different video players designed for different platforms and technologies: Flash, HTML5, native applications, special media plugins on various mobile and consumer devices. At the same time, all of these standards do not have a common language that could be used to display video ads.

More publishers were accepting new types of video ads, but the industry came up against a stumbling block: There were so many video player types and ad response units that advertisers never knew whether the ad would be compatible with a publisher’s website. As a result, advertisers had to custom-code each ad to interact correctly with different players, which was time-consuming and expensive. It was necessary to standardize the ad code that tells the player which ad to play at one time or another. That’s what pushed the industry to the VAST and VPAID standards development. Each of those standards has its own function and can be used in conjunction with other standards.

What is the difference between VAST and VPAID? Standardizing Online Video Ads

To simplify the ad serving process, the Interactive Advertising Bureau (IAB) introduced a standard for video players. Common in-stream advertising protocol provided a standardized ad response format. Thus, the advertiser doesn’t have to worry about the video ad failing to run on a certain player, and publishers shouldn’t have problems with limited compatible demand. The template was called VAST - stands for Video Ad-Serving Template.

The Video Ad Serving Template is a common communication protocol that allows the video player and the ad server to speak a common language, enabling ad server to use a single ad response format across multiple video players. The VAST tag automates ad delivery - virtually any third-party video player can run with VAST tags.

How does VAST work?

VAST consists of a unified XML-based ad response for in-stream videos and an XML schema definition (XSD) for developers. The goal of VAST is to be compatible with any scriptable media player framework. VAST is the foundational protocol for a wide distribution of video ads and videos in players on publishers’ websites and mobile apps. 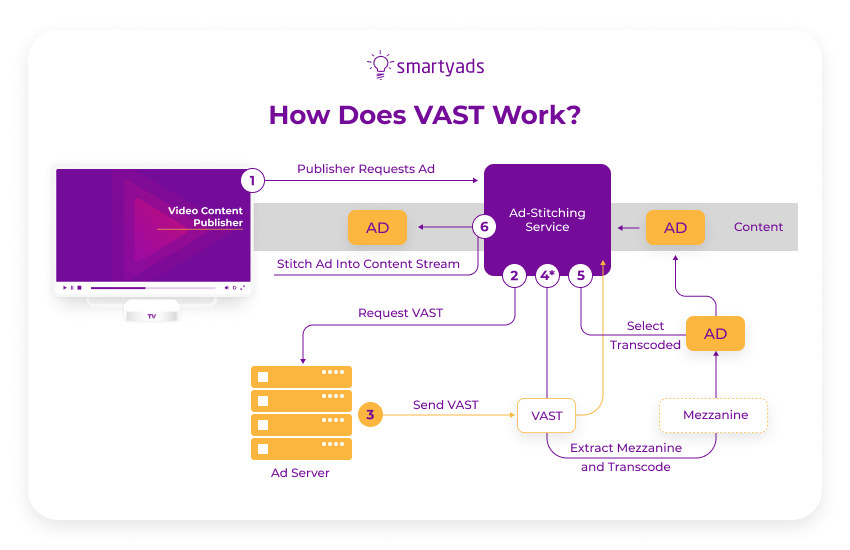 The following 3-step process describes the mechanism behind the VAST standard and the way it works:

VAST employs an XML script for the interactive video ad, which contains instructions about how the video player must handle the ad, including:

The brief history of VAST: versions and capacities

Basically, what the VAST tag does, it instructs video players about creatives and how to serve them. Since its launch in 2008, the VAST ad standard has been evolving quickly, gaining new features and functionality.

Today VAST supports the following types of video advertising: ad video played before or after the main video (pre-rolls and post rolls) or ads running during an advertising break. As well, VAST supports overlays - ad units that appear as text/image excerpts displayed over the main video without interrupting playback. Another popular format is a joint banner - an advertisement that is displayed on a web page outside of the video player. Such banners are typically triggered by certain events that occur in the player, for example, the beginning or end of a frame, or the transition to the next video in the playlist.

The downsides of VAST

The upsides of VAST

It is designed to solve the problem of incompatibility between complex specific advertising formats and video players developed by various companies. If you only plan to display simple video formats such as overlays the implementation of VPAID is not necessary. However, if you plan these ad formats to interact with the player in some way, such as executing scripts or stopping the main video from playing at some moment (to initiate user interaction), then the use of VPAID can be highly recommended.

VPAID ads have an industry-standard in a form of API, a set of protocols that define how a player handles video content from the ad server. The API contains video instructions on how to play, close, pause, expand, hide, or execute other actions on the ad server. 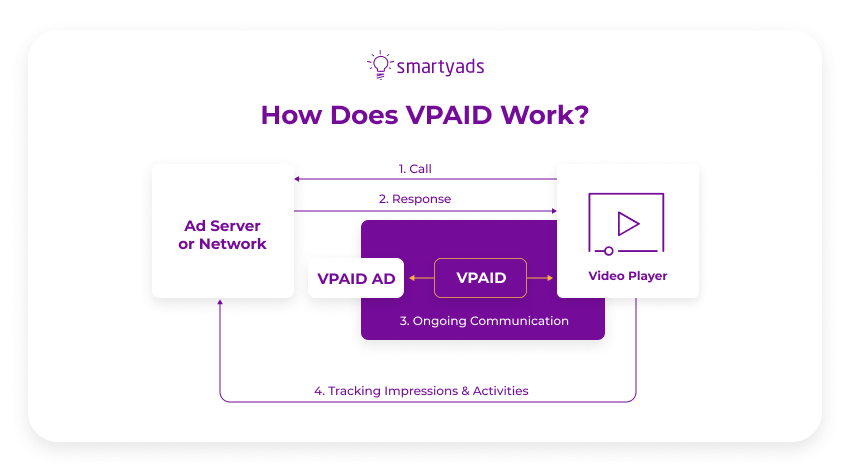 The VPAID ad serving process resembles one of the VPAID, however, only at the beginning. Looking at the scheme above you can closely inspect the whole process in detail. In the nutshell, it boils down to the following 4 steps:

The brief history of VPAID: versions and capacities

The majority of advertisers prefer the VPAID ad standard to the VAST ad standard because of its interactivity, viewability, and verification. Advertisers also have more control over the display experience of video advertising campaigns using VPAID tags.

Meanwhile, publishers expect to improve the liquidity of video ad supply and sell more in-stream video inventory. VPAID 1.0 and VPAID 2.0. Are the only standards that have been developed over the past years. The majority of players are running according to the VPAID 2.0. which has some fixes that weren’t covered in version VPAID 1.0.

VPAID 1.0 was only able to serve ads on desktop, it also had very small Flash rendering capacities. VPAID 2.0. progressed to serve ads in mobile environments and adjusted functionality beyond Flash, mainly to HTML5 and JS. To find out more about VPAID 1.0 and VPAID 2.0 specifications and applications check out the latest materials from IAB.

VAST or VPAID: selecting the right

Here’s the thing, VPAID allows video players to accept more video ads, which is beneficial for both publishers and advertisers. VAST is regarded as just a script that instructs the video player on how to manage the ad, while VPAID offers a more interactive, robust experience for users.

VPAID also allows users to interact with the ad, click on it, expand it, follow the link, and trigger direct response and tracks granular viewer engagement. Additionally, VPAID permits the video player to preload the ad before delivering it. VAST doesn’t do anything comparable. Finally, VAST uses XML format while VPAID uses SWF.

So who’s the winner in the VAST vs VPAID battle? There’s no VAST VPAID ads competition as it turned out. What’s a better idea to use VPAID or VAST tag for serving your video content? Try to imagine the VAST as a complex automation system that has all the necessary components for the smooth rendering of the standard video ads. As long as the ad video ad doesn’t require extraordinary functions or interactivity, the standard totally satisfies the ad serving process. Once the non-standard video has additional performance parameters, VPAID appears as a helping tool.

Today VPAID is used for serving the majority of video content. Still, it also hinders the ad insertion process on the server-side. The agencies and advertisers simply desire to achieve better verification, viewability, and smooth rendering for their mobile interactive ads.

For this reason, they apply VPAID and MRAID. As an advertiser, you should not only care about the performance of such ads but also about optimizing towards maximum ad serving opportunities. For the best results, you need to send a VPAID containing the VAST response. This way potentially you will be able to address the maximum vacant ad placements at the publisher’s inventory.

How to make a custom VAST tag?

VAST tags either come in the XML or URL format. Mind that if your DSP supports both, the XML type is still more preferable. When you need to create a custom VAST tag there are three options to follow:

How to make a custom VPAID HTML ad unit?

Thing is, VPAID can perfectly support interactive ads which means that creating VPAID creatives will be as easy as creating simple banner ads in HTML. That may seem like a challenging task at first but indeed everything boils down to to the following steps:

There’s no such battle as VAST vs VPAID - Both standards were developed in the pre-mobile era. Both use different algorithms to define which ad to play, for how long it should last, and so on. IAB’s Mobile Marketing Center of Excellence launched a project to design a common API for mobile rich media video ads that should run smoothly in mobile applications. That’s how next-generation Mobile Rich Media Ad Interface Definition (MRAID) appeared. But that’s a different story that we are going to uncover in the next articles. Stay tuned!

Written by
Irina Kovalenko, CMO of SmartyAds
February 2018
rate this article
share with friends
Previous Article
next
Pre-roll advertisement: How Do Marketers Take Advantage of it? February 2018 Next Article
previous
What’s the Difference Between In-Stream and In-Banner Video Ads? February 2018