Nowadays, digital video advertising is still booming. In 2022, marketing stats show that 86% of marketers use video as an effective marketing tool. Sure, motion and visuals help people relax after a busy day while they learn more about their favorite brands.

You may hear about the success of pre-roll in-stream video ad that has captured the advertising market. But now, a new format is attracting advertisers' attention — in-banner video ads (less popular, more effective).

In-banner video lets you pack your marketing into one unobtrusive clear form — IBV. Using this video ad format, you will get advantages that in-stream video ads don't have.

Let's find out why it's a good idea to use in-banner video ads for your campaign.

What are the Features of In-banner Video Ads?

Yes, it's a good old banner, only now it's moving. The site with IBV looks amazingly similar to the newspaper from Hogwarts' magical world.

It's about a new advertisement technique. In-banner video ads create a unique balancing act between context and distraction. If you show the video smartly, without disturbing the users, you can profoundly impact them.

We have written more than once about the benefits of video ads. The video is simple for the human brain. To understand the idea of the video ad, 10 seconds will be sufficient for everyone; it's equivalent to a few hundred words. For that reason, the video ads in the banner are short but clear, in contrast to in-stream video ads.

The three kinds of video advertisements differ by such features: 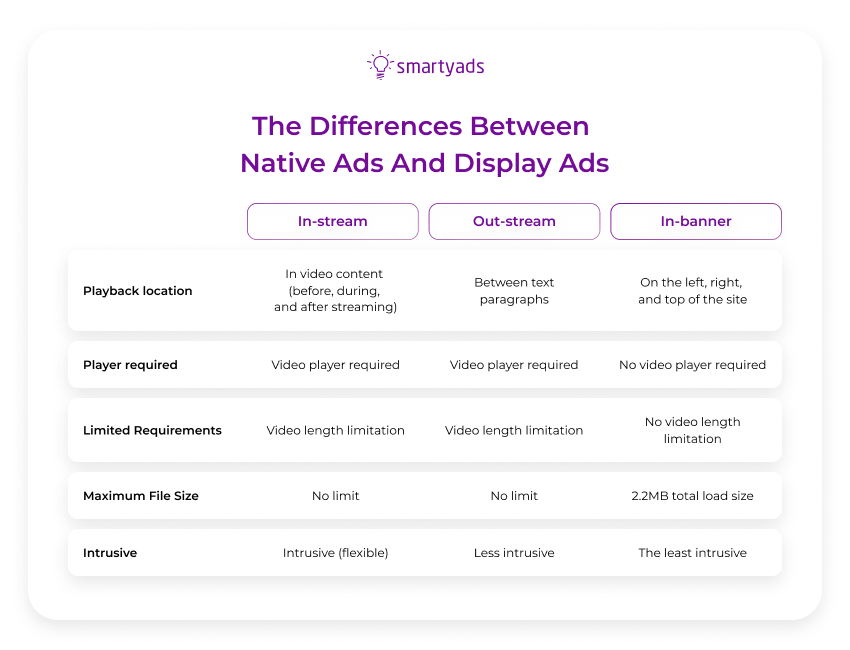 Unlike in-stream advertising, in-banner video ads play outside video content without sound. It provides extra advantages for the user experience.

The main advantage of the in-banner ad is that it does not interrupt a user's online experience. Interruption and destructivity in other advertising formats caused an actual apocalypse for advertising. Look more deeply at the story of the banner, and you will be aware of its significant issues. Also, you will truly appreciate the benefits of the in-banner video ads for your marketing strategy.

The banner ads have undergone a fantastic evolution. Who would have thought that a piece of fabric on a wooden pole (old French "baniere") would turn into a complex multimedia object?

It went a long way from outdoor posters to the first online static image, and today's banner advertising returns to its original essence. It means "flying in the wind" — attracting attention via movement, like a video.

The first video ads were viral, no worse than clips and TV shows. But over time, an avalanche of new ads began to annoy people. Advertising infiltrated television, streets, and the Internet and turned into "white noise". Users stopped noticing ads. Marketers have referred to it as banner blindness.

Consequently, advertisers have a new challenge: to bring back users' focus. In 2010 the first in-banner video ads that learned to interact with the user appeared. It has been a nightmare for users and publishers: ads overloaded websites and attacked users with loud sounds. Stunned users rushed to install ad blockers. In response to this, in 2013, major publishers like Facebook, Google, and Apple opted for captioned or sound-off autoplay.

Soundless in-banner video advertising has become a new stage in the development of digital advertising. There are new features of this format that are not included in out-stream video ads: 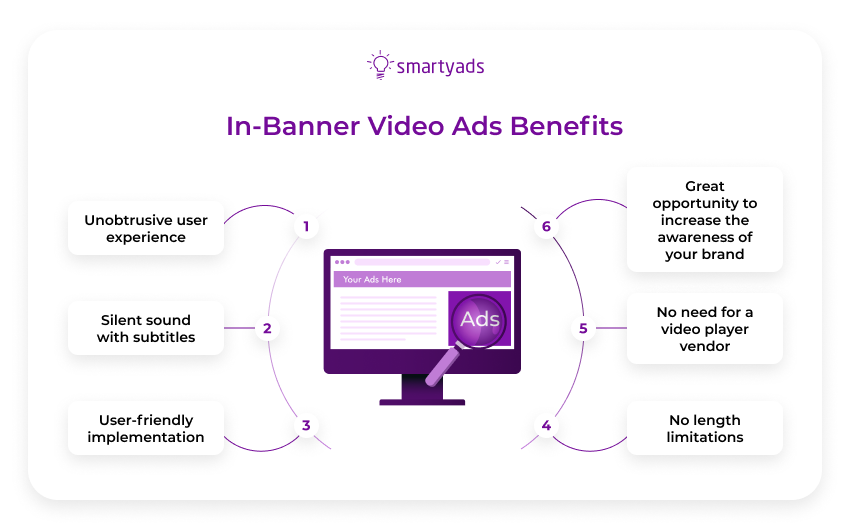 Busy and over-saturated life has led to severe changes in trends: open space, clean and simple lines. No trinkets, cumbersome paintings, or color frenzy. Only a bright area where the brain can rest, think, work, and create.

Today, users love to see a website with UI/UX practical design without advertising, which appears at every corner as in a snuffbox. Usually, visitors come to the website to study information quietly for a few seconds or minutes. Luckily, in-banner video ads have the primary task — do not intervene with the user.

That's what the in-banner video ads do: run in the background without audio. However, how can silent video ads be successful? It's incredible: silence is so valued that, according to a recent poll, most modern people watch videos without sound!

So, Verizon Media and Publicis Media conducted a joint study on this issue. As it turns out, 69% of Americans in public spaces watch a mute video. That makes sense, given that many people don't want to bother others or enjoy more privacy. But what's impressive, even at home, in private places, 25% of people continue watching silent videos! 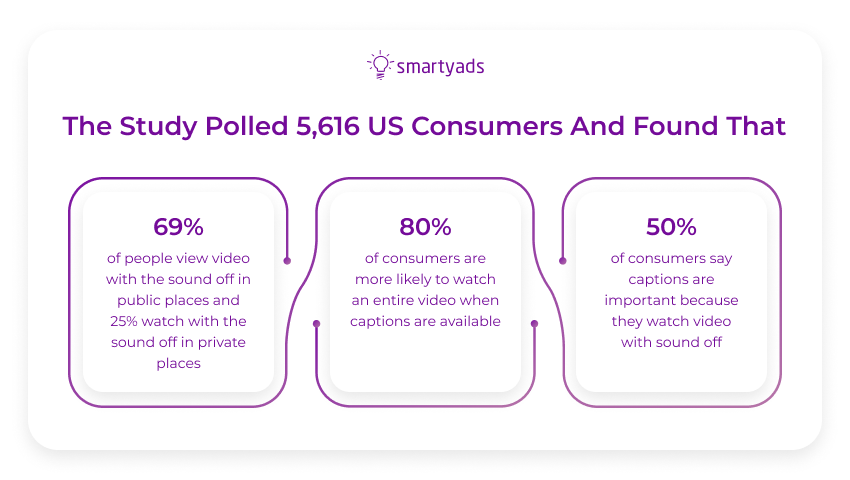 By deleting sound on video content, you will eliminate many disadvantages of multimedia but keep the advantages of video format.

In-banner video ads serve as an excellent tool for dynamic remarketing. The video creatives delicately remind customers about products or services they have been interested in. It improves advertisers' return on investment.

Usually, even three lines of subtitles on the video ad are enough to understand its content. Wherein according to recent research, subtitling on muting video ads is an even more significant opportunity for advertisers than you might initially think: 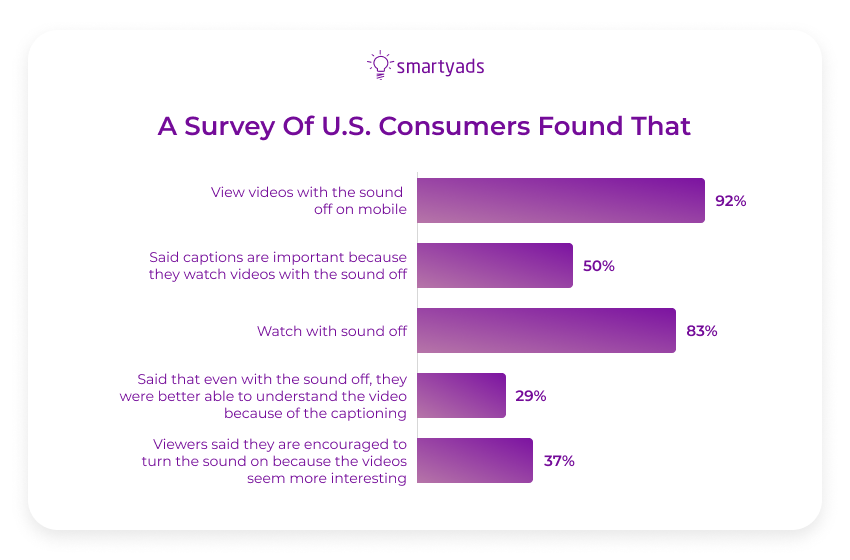 Video subtitles allow us to remember advertising, even more, bringing clients closer to the brand.

Finally, the most critical asset of in-banner video ads is their ability to look like they are NOT advertising — as an essential part of the site. So when people click on the video, they often don't fully realize they're clicking on the ad.

In-banner video advertising is a great way to create a brand identity. It is effective if qualitatively created and correctly oriented to the audience. But, as practice shows, this video ad format is often created far from the best quality. Let's look at how to do it properly.

Creating sound-free multimedia videos still gives you rich tools to influence the user. And all this can be turned into a sensational story if you stick to the five key components of visual storing:

According to a study by Realeyes and Mars, there is a clear link (up to 75%) between the emotional perception of video ads and their impact on sales. Note that the first second is more likely to go before the user notices and pays attention to the video ad.

Plus, in-banner video ads have additional interactive parameters to turn passive viewing into an actual engagement.

The International Advertising Bureau (IAB) approved the in-banner video ads. The video must:

In-banner video ads can be in two formats, depending on the interactivity:

The most efficient placement of in-banner video ads is as follows: 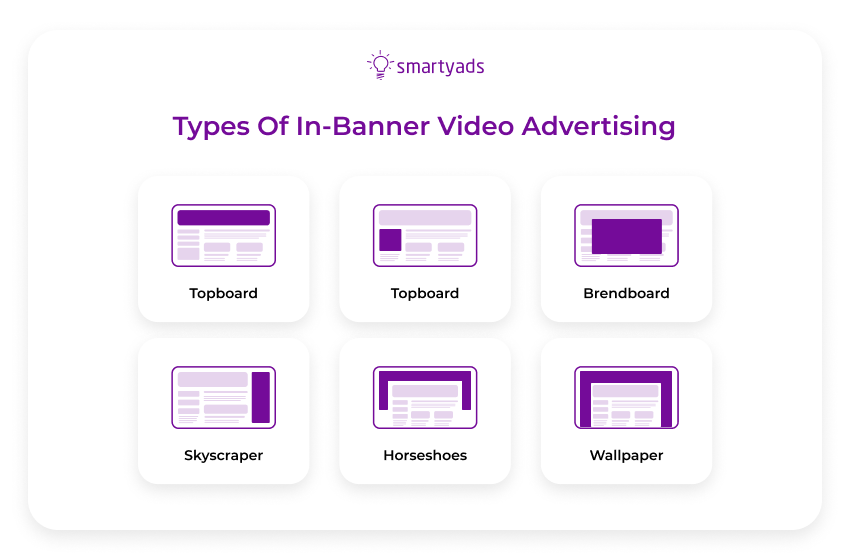 The main thing is that in-banner video ads have not appeared simultaneously in multiple places on the site.

Think about where you'd like to put your video ad. For instance, video content can be adapted to site style. It means reducing the banner's visibility; the user will not subconsciously push away the "foreigner". This technique is good if the site is also of high quality and safety.

Also, today there is such a problem as in-banner video ads fraud. Unscrupulous exchanges offer to buy in-stream video advertising, but programmatically, they show the video content in-banner ads. Consider the scope of an ad fraud problem: 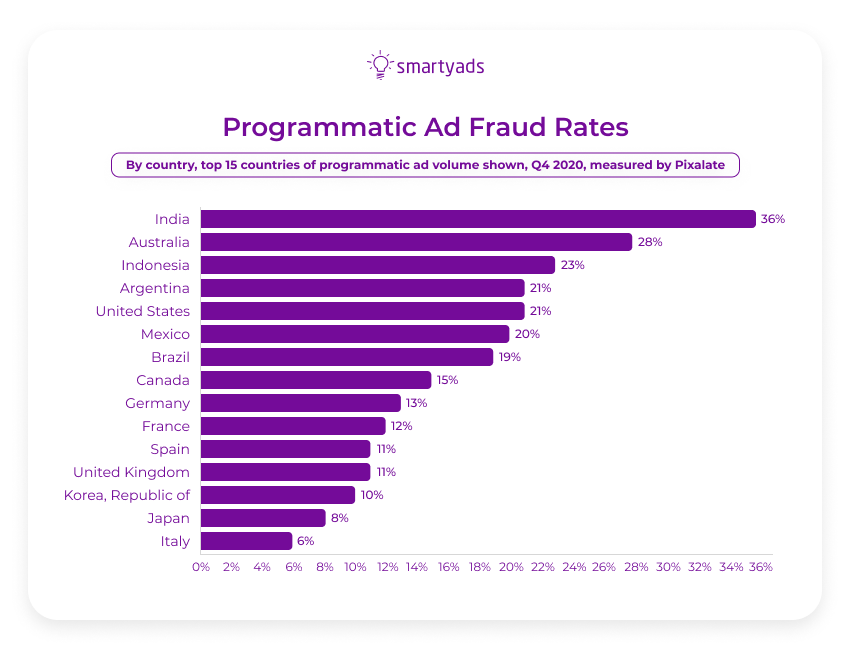 If you strive to protect your digital video ads and boost their effectiveness, we recommend using our DSP. On the SmartyAds platform, you can buy high-quality impressions with minimal friction.

What is the ad forecast for IBV?

Will in-banner video ads dominate the next decade? Not easy to predict. However, it is assumed that there will be no battle between in-stream video ads and in-banner ads.

IBV is much less aggressive than in-stream ads. It is less adapted to direct sales but more useful to improve brand awareness. This video advertising conveys the atmosphere of your values and pushes the user to the right idea.

Another significant advantage: in-banner video ads are more cost-effective. It attracts attention, but it sits quietly until it is noticed (the user initiates the interaction). That's why this ad has a low click rate — just 0.39%. But only interested potential customers click! That is why in-banner ads are at least 20% cheaper than in-stream video ads if you pay for the clicks on the PPC model.

Also, until recently, the slower website was the reason the in-banner video ads began to lose popularity. However, proper setup and the modern speed of the Internet allow you to ignore this drawback.

The evolution of video advertising is still underway. There is a lot of research ahead on the impact of video creatives on user interaction with a brand. Nowadays, in-banner video ads are a low-hanging fruit that can bring produce immediate results for your strategy.

hAdd banner video ads to your digital marketing toolkit and sign up for DSP. You will learn what can be achieved with programmatic's magic!

Written by
Irina Kovalenko, CMO of SmartyAds
December 2022
rate this article
share with friends
Previous Article
next
Video DSP: How To Use It? December 2022 Next Article
previous
SmartyAds Partners with PubMatic to Streamline Access to Premium Demand December 2022