There are several types of pricing designed for digital programmatic advertising, such as CPI, CPC, CPA and, of course, CPM (CPT) - one of the most popular metrics. It is an abbreviation for “cost-per-mille”, where “mille” is a Latin word which stands for “thousand”. This basically means that the cost of CPM advertising is calculated based on measured impressions. For every thousand of them, advertisers pay to publishers a certain amount of money.

How does CPM work

It is easy to calculate how much should one pay using cost-per-thousand model. First, measure the total number of served impressions. Then, divide it by 1000. Now, in order to get CPM, you only need to divide the budget of your campaign by that number.

These three steps can help you to easily calculate how many impressions you will get for a certain amount of money or how much you should pay for a given number of impressions. The formula seems very simple and it is probably one of the reasons why CPM revenue model is the most common pricing method for digital ads.

But how to calculate a number of impressions? Is it the same thing as page views? Usually, yes, but in some cases, these might differ. For instance, if an ad is placed on the same page of the website twice, the advertiser will have to pay for two impressions, even though there was only a one-page view.

CPM and other types of web ads pricing

Let us now take a look at other advertising pricing models and see how CPM advertising is different from them. Compared to newer pricing models, CPM is much simpler, as no specific actions as installs or clicks are expected from users.

For instance, the cost-per-completed view is a metric that requires ads to be watched entirely, not just a glance, in order to get the count. Cost-per-engagement is somewhat similar, as it only counts actions triggered by users, such as playing mini-game, taking a survey, clicking, etc. Cost-per-mille can be considered a more traditional pricing model and this is sometimes exactly what advertiser needs, e.g for brand awareness campaigns.

More traditional metrics include CPC and CPA, which stand for cost-per-click and cost-per-acquisition respectively. In CPC the advertisers pay for every click on the ad, while for CPA they also need a visitor to purchase something after that click. These types of advertising are better suited for promoting a product to a certain niche audience. At the same time, if a campaign is aimed at raising brand awareness or popularizing a specific message, CPM might seem like a better choice.

Benefits of CPM advertising for publishers and developers

CPM can be especially profitable for publishers, as they get money just for placing ads on their website. This is much easier than getting users to click on an ad or interact with it and usually, these results depend more on advertising itself rather than a publisher. There is, however, one downside worth noting – CPM rates are not so high, as compared to other metrics, so in order to get higher profits, a website should have lots of traffic.

When it comes to mobile apps and game publishers, CPM can be effectively used to calculate the expected revenue made by placing an advertisement in their apps. Different estimations, such as an average number of served impressions, daily-active-users count, can be combined with specific ad network metrics, such as CPM or eCPM, in order to calculate how much profit they can get by placing ads in their apps and games.

It is essential for any professional mobile publisher to know these numbers, as well as other important statistics, such as IAP conversion and retention. This knowledge will ensure that their apps remain profitable. Likewise, it’ll help them to understand whether they need to make more updates and optimizations in mobile game ads they apply in their apps.

Why should advertisers use CPM

Once we’ve discussed several obvious benefits of CPM campaigns for publishers, some might make the conclusion that there is no use for an advertiser to set a CPM based campaign, since impressions are not so important as clicks, installs, and acquisitions. To check if this true, we should now look at the CPM campaign from an advertisers’ point of view.

As we have already mentioned, using CPM advertising is a perfect strategy for building a strong audience and raising brand awareness. Once a new business has been set up, it is essential to introduce it to users, make the brand known and build trust with potential customers. If a user has never heard about a certain brand, it is very unlikely that he or she will immediately buy a product after encountering their ad on the Internet. So in this case, building brand awareness first is strategically a better move than racing for purchases from day one. And this is exactly the situation when advertising CPM pricing will be an ideal model for advertisers.

It is also a good move to use CPM in order to get to build your target audience persona and introduce your brand to them. You can try different demographic groups, such as millennials or seniors, by placing an ad on targeted websites. Then, if you measure and compare engagement on both sites, you can adjust your strategy accordingly and proceed with your marketing, without spending much money on research.

The success of the campaign can be measured using different metrics, but one of the most popular is CTR which stands for click-through rate. It is calculated as a percent of people who clicked on your ad once they have encountered it. For instance, 5 clicks from 100 impressions will give you 5% CTR, 8 clicks for 100 impressions gives 8% CTR and so on. You can also count sales and other types of engagement to build credible statistics and make CPM work for you. 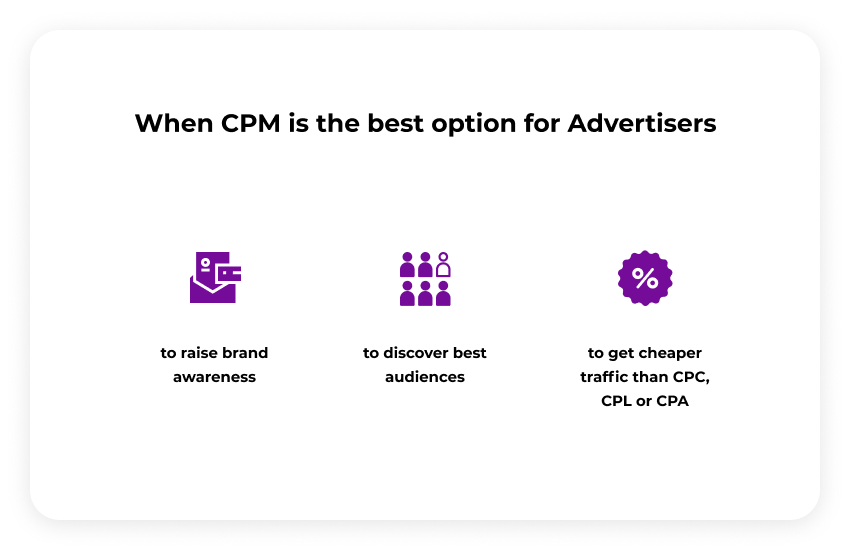 How to set up a successful CPM campaign

Now that we have examined a number of situations when CPM advertising is the right choice, you might ask how can one start a successful CPM campaign? At SmartyAds, we have effective demand-side platform solution for advertisers and supply-side platform for publishers. Just a few clicks and you can start your own CPM ad campaign of effective monetization.

Reach out today and start getting benefits from CPM pricing model!

PPC, CPC, CPM, CPA, CPI and CPL: Which Online Ad Models Are Best?
Previous Article
next
What Is Push Notification Advertising: How to Launch It on Smartyads DSP November 2019 Next Article
previous
Why Page latency Happens in Header Bidding and How to Tackle it November 2019