When it comes to advertising, the ongoing battle between marketers and ad blocking systems doesn’t seem to stop in 2020, leaving huge marketing teams asking themselves how to get around ad blockers? These simple plugins are causing huge damage with more than £18.4 billion of estimated loss for publishers in 2018, according to AOP.

Ad blockers are used by 25% of US internet users on at least one of their devices. The reasons behind it vary from reduced loading speed and data usage to security and privacy concerns. However, most of the adblocking statistics show that users are simply annoyed by intrusive ads as they are disrupting the user experience and are often not even relevant.

When creating marketing strategy against ad blocking, professionals should know that the situation is slightly better for mobile advertising than for desktop versions. As measured by IAB, around 6% of users have an ad blocking software on their smartphone. Thus, the good news is, that the usage of ad blockers usually disrupts browser-based activities and doesn’t affect the in-app experience. However, things may change if ad blockers will be encouraged by support of some major tech companies. 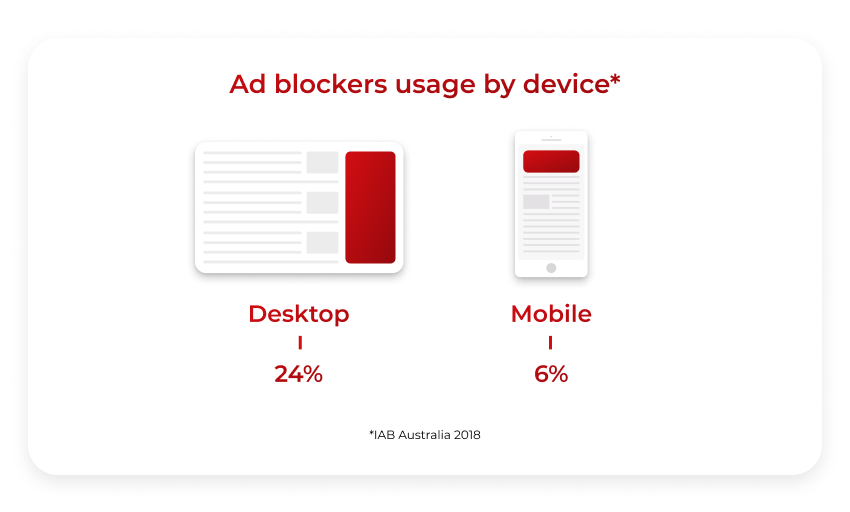 One of the most controversial examples of such encouragement is Apple’s permission to adopt mobile ad blockers on iOS 9 platform. This situation can be changed only by introducing measures protecting advertisers, such as ‘No Impression, No Charge’ policy which makes advertisers charged only for ads that were actually seen.

Get around ad blockers and win back your potential customers

Let us now investigate how can advertisers avoid ad blockers ad win the users back. There are several ways to do that without interrupting user experience or losing money.

Native advertising is a new level of advertisement that looks and behaves as a part of the environment they appear in. While usual ads are made to be noticed and therefore can be perceived as intrusive and disruptive, most of the native ads are sometimes even hard to identify at a first glance. Not only can these formats get around adblockers, but they can also raise the purchase intent to 20% and are easy to fit in most of the platforms and environments.

Rewarded videos can be seen as mutually beneficial for both users and advertisers, as watching a rewarded ad is a personal choice of a user. The user can choose whether to watch an ad and get some in-app reward such as game currency, exclusive services or other values. With this strategic marketing, the ad is not viewed as intrusive, but rather as a fair exchange between individuals and advertisers. Compared to other formats, rewarded ads can get you 20% to 40% higher profits.

One can also use programmatic audio ads that can appear during podcasts, on music-streaming or radio. Since ad blockers are designed to catch only visual ad units, audio programmatic tracks easily deal with a challenge and go unnoticed. This makes programmatic audio one of the most effective and profitable type of ads.

Digital marketing is constantly developing which provides advertisers with new types of ads, more user-friendly and thus, more profitable and engaging. At SmartyAds, we believe that using effective cutting-edge marketing technologies would benefit both advertisers and users. Our ad block defying advertising formats on SmartyAds DSP include native ads, rewarded videos with the implementation of programmatic technologies, ensuring your ads reach your potential customers.

Let us help you find out which strategy would work best for your business.

Written by
Irina Kovalenko, CMO of SmartyAds
October 2019
rate this article
share with friends
Previous Article
next
Is It Worth Turning to In-Game Advertising? October 2019 Next Article
previous
How Digital Marketers Can Benefit from VPN October 2019

What is ad viewability and how to improve it?
5-Step Process to Reduce Advertising Costs on DSP