A few years ago, Google officially launched a programmatic audio advertising platform following the successful example of Spotify, whose income grew to 94% after audio ad format implementation. Even though programmatic audio inventory is still relatively new, it is experiencing stable growth and an obvious rise in popularity. Adoption of AdsWizz by Pandora, a newly-made programmatic audio collaboration of SoundCloud with iHeartRadio and Panoply with TuneIn are examples that prove this too.

As the IAB advertising report points out (last year and Q1 2020 revenue results), Internet audio revenues have reached $2.7 billion which represents an almost 21.2% increase. Statista makes predictions for the future and anticipates that by the end of 2024 audio ad spending will account for $8,594. 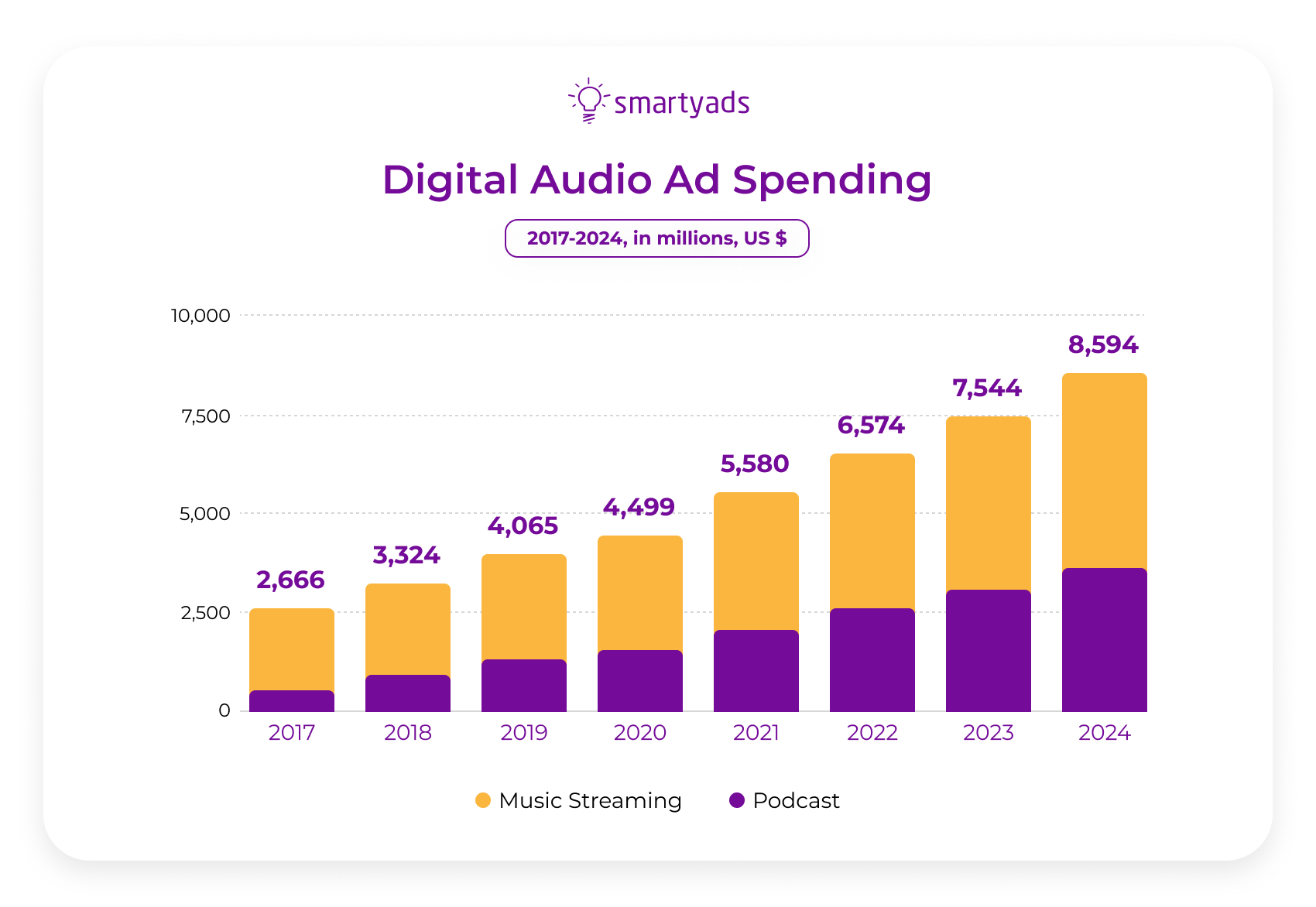 Plus, audio on mobile devices is quickly outrunning desktop due to an abundance of convenient formats for mobile content consumption. Audio on the desktop has increased share only from 1.4% to 1.5% while the audio on mobile devices grew by 25.3% thanks to podcast proliferation as reported by IAB. A report from Statista reflects pretty similar results for the US — digital audio mobile is a new winner. Thus, digital audio advertising and programmatic audio advertising will be booming soon. 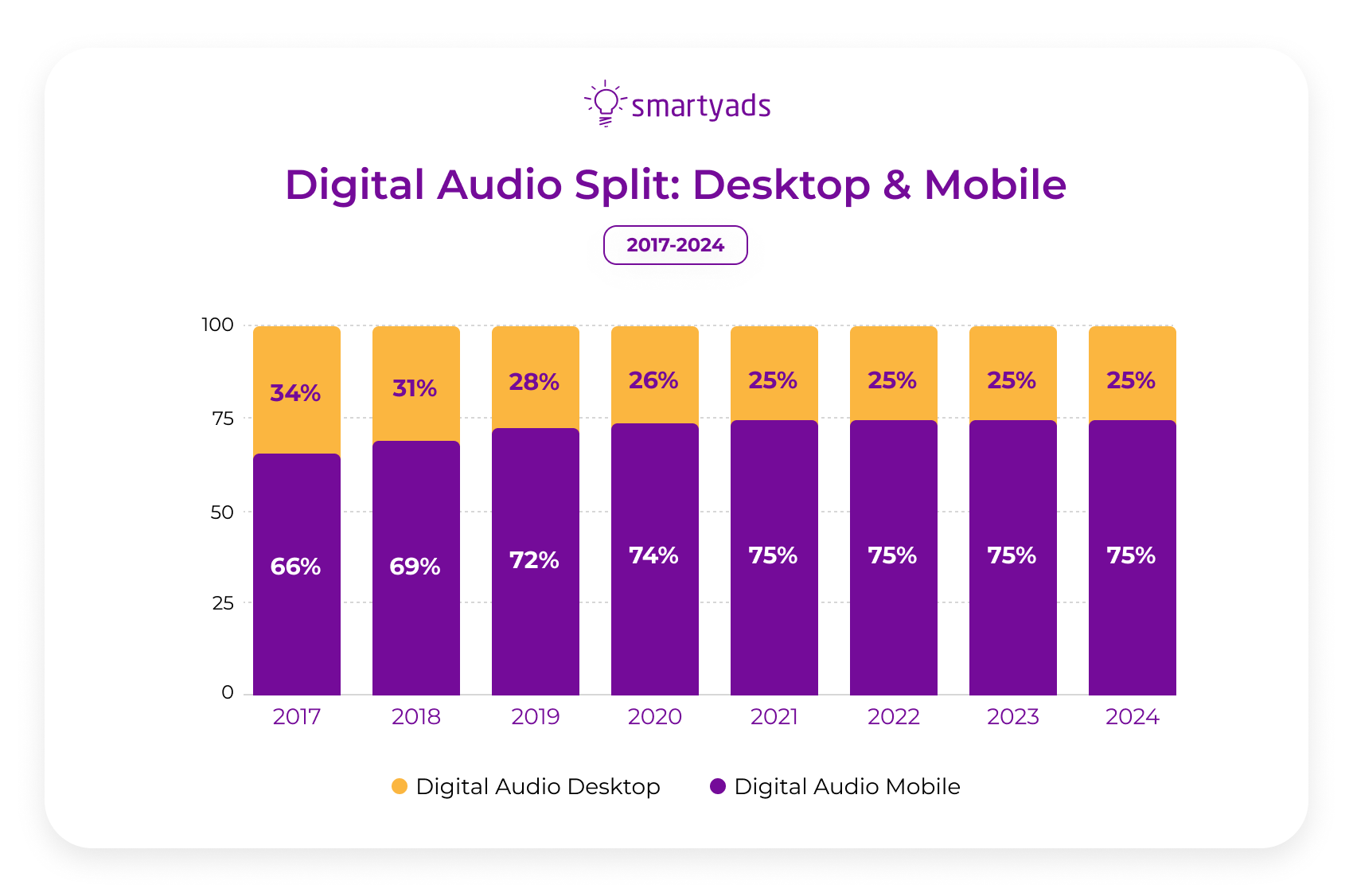 Thanks to gadgets with a constant connection to the Internet, the penetration of the IoT into our life, and the global lockdown consumers are staying online 24/7.

Surprisingly, many people have brought the sport to their lives exactly during the COVID period. They started regularly exercising, running, and maintaining a healthy lifestyle in general. 17% of people exercise more in 2020 than they did last year. The majority of people prefer to do sports with music or while listening to podcasts.

In such circumstances, programmatic audio advertising holds great potential for those companies that first shifted to the audio format.

What is a programmatic audio ad?

Programmatic audio is a digital advertising format designed for placement in audio content like podcasts, digital radio, and music-streaming services. Like the rest of the programmatic formats, it utilizes algorithmic buying technology in order to automate the process of ad selling and insertion.

With equal efficiency, a programmatic audio ad can appear on mobile, desktop, or in-app. The in-app ecosystem is favorable for the greatest variety of ad formats. For instance, the rewarded ad is designed for mobile game monetization whereas simple audio or audio & banner will suit any other app type: podcast app, music streaming, news app, etc.

What is rewarded audio advertising format?

It is very similar in action to rewarded video. When the mobile game is running, instead of the video the customer will hear an audio announcement. After the audio commercial is completed, the user will receive the promised in-game incentive. In many cases, the interface features an option to pause the audio. Additionally, when players transition from in-game content to programmatic audio ads, their in-game experience isn't affected, it doesn't distract the user from a game which increases the loyalty of the audience to the format.

How does audio programmatic work?

VAST protocol defines the placement procedure for linear audio ads (appear before, after, or in the middle of audio content consumption). As a rule, they accompany the following formats:

Static banners containing logo and CTA that appear while users are streaming music. Available for clicking upon while the audio ad delivery is in progress. 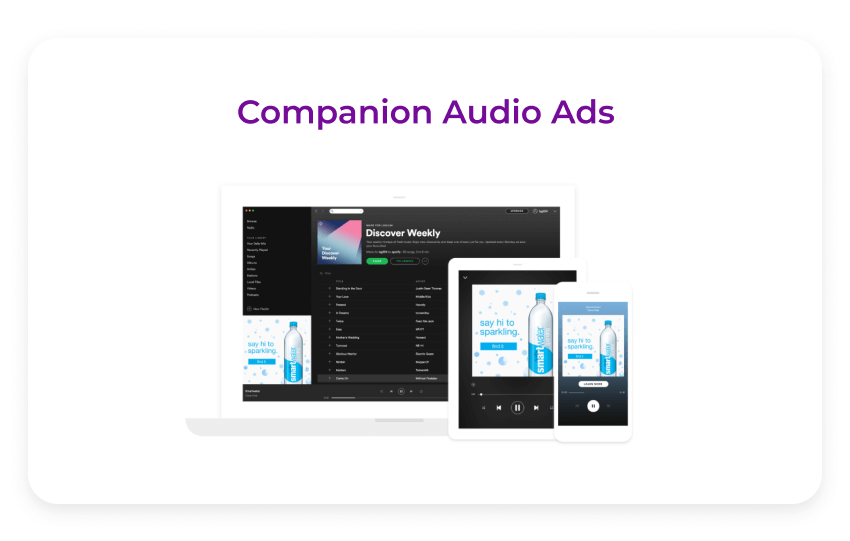 Ad placements for 1 or more audio tracks within audio content.

15-60 sec-long in-game audio ad track that provides an in-game bonus to the user upon audio completion.

You can serve an ad unit within songs in the playlists, as pre-roll or mid-rolls within podcasts, within radio ad breaks, or in mobile games.

Audio formats are now useful not only for the purposes of raising brand awareness but also for drawing attention to targeted actions.

Interactive elements of audio and visual advertising technology provide user engagement. The most popular are rewarded audios and companion ad units placed on the device screen at the time when the audio recording is playing.

What are companion ads and their benefits?

Take a look at the static banner on Spotify. In the free version, they're streamed to users at an interval of every 30 min. In some cases, they stay on the screen after the audio ends in order to let the user interact with an ad later. The format doesn't require user action to be triggered. The listener is streaming music or online radio without interruption.

What are podcast ads and their benefits?

Edison's research has revealed that 42 million US citizens normally listen to podcasts on a weekly basis. Research company WARC predicts that podcast ads will make up to 4.5% of all ad spend by 2022. This audio space (on-demand internet radio talks) is wrapped around streaming audio across certain topics (food, entertainment, sports, fashion, lifestyle, etc.) which can be used for podcast advertising purposes.

What are rewarded audios and their benefits?

This format is not restricted by ad blockers. It is characterized by a 100% completion rate and publishers' CPM that reaches $2-$30 on average. Since the rewarded ad doesn't distract users from the game and doesn't affect in-game progress, it is considered less intrusive than an average visual ad. All of these factors translate into higher user retention and satisfaction. 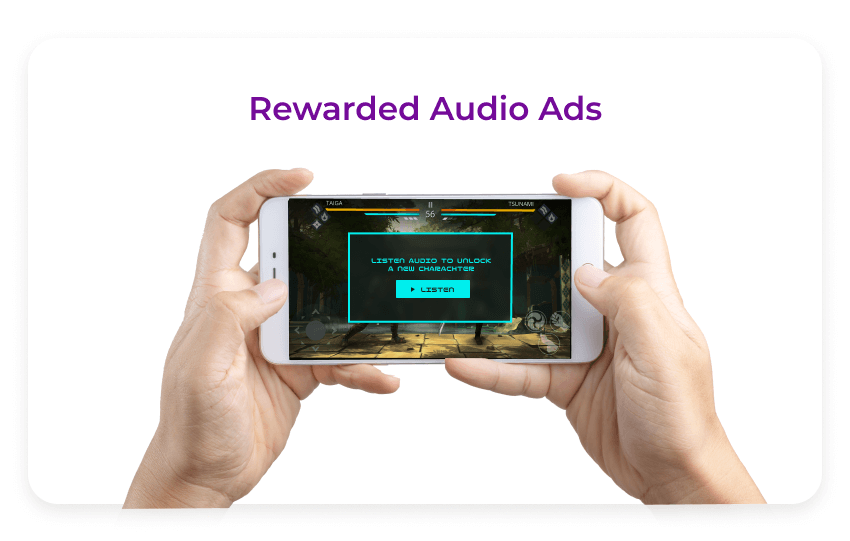 Another great way to use an audio creative appears to be geofencing. This geolocation technology is syncing audio unit delivery to brick-and-mortar shops. It uses GPS settings on the cell phone to serve users' audio ads right on the spot in order to encourage shop visits.

Mobile publishers can implement programmatic audio buying via SDK specifically adapted to render audio ad formats. Because such an SDK utilizes the Application Programming Interface (API), it can be connected to all kinds of SSP. The API will be responsible for drawing demand partners to the app who want to bid for certain digital audio advertising slots in particular app categories. Then, API will be doing the rest of the work: pairing ads from the server to mobile SDKs for further rendering.

As most of the challenges have gone to the past, rendering the digital audio content became possible according to both DAAST and VAST standards. The latest upgrades of IAB enabled programmatic platforms to transact the videos using a single framework. As a result, more digital audio inventory becomes available at open marketplaces. Still, some obstacles will find their resolution as soon as technology hits mass adoption:

Supply still outweighs demand, meaning that there may be remnants in programmatic audio slots or the price may be lower than expected. In such circumstances, until the market grows enough, non-programmatic or programmatic direct deals for publishers will make more sense than RTB.

It's worth remembering, not all programmatic platforms are designed to support audio formats. Those that have such functionality should feature separate SDKs for digital audio formats or enable API connection.

If previously media buyers had to target specific genres and niches on radio, with programmatic advertising (automated systems) audience targeting parameters can be extended to geo, age, income level, type of device, OS of the gadget, and so on.

Thanks to this, targeted ads reach audiences that are most likely to make a purchase. As a result, the ad recall increases, and the online advertising campaign budget typically gets saved (since targeted ads are not broadcasted to podcast listeners who fall out of selected targeting criteria).

Advertisers can strategically target digital audiences by geo, time of the day (and other parameters that traditional broadcast parameters allow).

Today online audio advertising can do everything that traditional radio ads do. At the same time, due to placement in an interactive environment, online audio ads not only attract digital audio listeners but also immediately convert them into customers with a link in the banner that accompanies the audio (e.g on digital radio).

In connection with this and the growing number of audio streaming services, the volume of audio placements will soon be comparable to traditional radio advertising. It is also expected that the capacities of digital audio ads will be extended in the future thanks to the new platforms, voice assistants, and bots. If this happens, users will be able to interact with an audio ad unit using their own voice commands.

How to make it work?

Activating programmatic audio ads is just as simple as video ads or native ads if you use an advertising platform like SmartyAds DSP. Here's how to reach premium digital audiences with SmartyAds:

Register at SmartyAds DSP, go to the dashboard, and to the campaigns section. The first step will be choosing a campaign type - select "Audio". 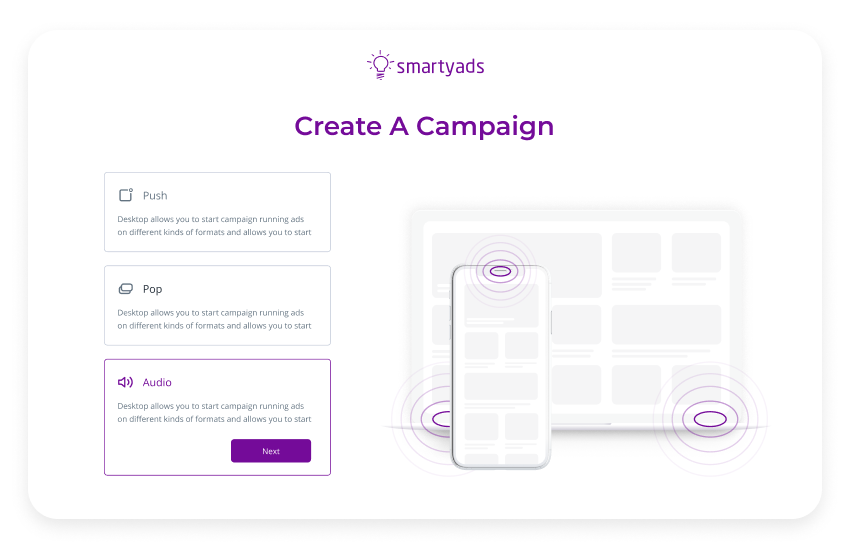 Upload your audio creative in the campaign settings. 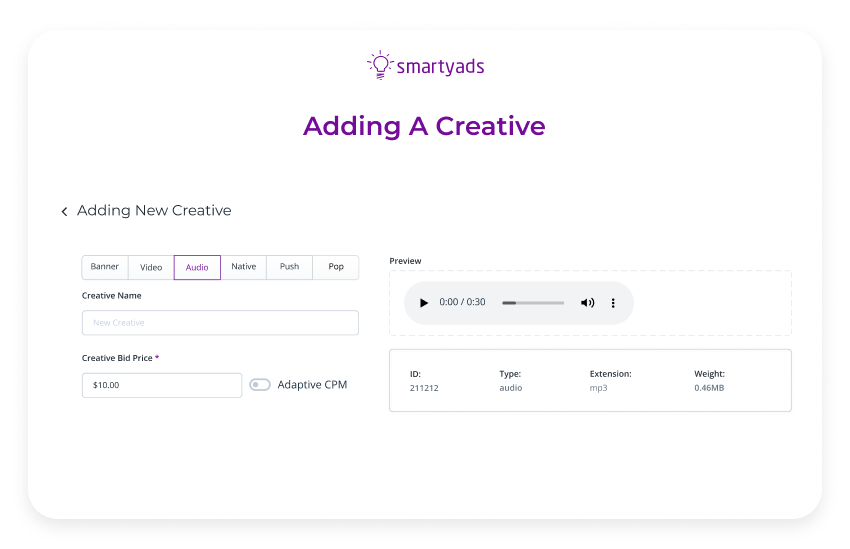 After this, you can set up the parameters of your digital advertising campaign and activate it.

Benefits you get from running programmatic audio ads with SmartyAds

First of all, the campaign execution process gets automated and more efficient. Here is the list of benefits that you can receive while advertising on SmartyAds DSP:

Ads will be delivered one by one, it guarantees the direct interaction of the audio ad with the target audience. Thus digital audio listeners stay focused only on your ad and don't get distracted by other ads (like often happens with image formats).

Digital radio space was never affected by ad-blocking tools. Music streaming services instead offer special ad-free subscriptions. However, the majority of music and podcast listeners stream ad-enabled content which is not interrupted by any ad blockers. Thus, a media buyer can reach a valuable audience with no risk of wasted budget.

The ad-buying workflow in audio programmatic is pretty similar to other formats. On DSP advertisers choose suitable targeting criteria the same way as they do for banner and other types of campaigns.

On SmartyAds DSP advertisers can run cross-device campaigns on other channels and with other formats as well. For example, the platform supports connected TV advertising, serving banners, video ads, native ads, and even DOOH.

SmartyAds works closely with mobile developers and technology partners such as AudioMob, to ensure that our rewarded and podcast audio ads arrive to the listener naturally, in a non-intrusive manner. With our solutions, publishers can tap into the world of increased revenue opportunities that raise the publisher's CPM to $2-$30 and higher. Advertisers, in their turn, can add programmatic audio to their overall campaign mix, implement premium programmatic strategies, and gain more views, sales, and conversions.

Implement audio programmatic into your marketing strategy with SmartyAds. Register on SmartyAds DSP to get started!

Written by
Irina Kovalenko, CMO of SmartyAds
August 2019
rate this article
share with friends
Previous Article
next
The Evolution of Advertising: From 1971 to Present Days August 2019 Next Article
previous
A Major Step Against Mobile Fraud: SmartyAds Enforces App-Ads.txt August 2019