The in-game advertising market is a tidbit for both advertisers and game developers, as it can benefit both parties, especially given its recent trends.

More and more advertisers are tightly focusing on the mobile environment as it doesn't rely on cookies, it is ad blocker-resistant, and you won't see competitors' banners placed nearby your own. Today average user spends up to 70% of their daily time using mobile devices. By the end of 2020, mobile advertising budgets will account for 50% of all digital advertising spending worldwide.

App developers can offer a free user experience by creating content they like. This is achieved with ad revenue from gaming apps. But this way of engaging users is also effective for advertisers: to attract new customers for their products, services, or other apps.

From in-game advertising, developers not only generate revenue and enable in-app purchases, but also improve the user gaming experience and increase engagement through rewards for watching videos or offering relevant content.

The important thing for advertisers in the mobile gaming industry is that it protects their brand from mentions and negative reviews. Brand owners know that ads will only appear in relevant in-game environments. And given in-game advertising's dependence on user interaction, advertisers can accurately track key metrics: engagement, reach, and completion rate.

What about advertising in mobile games?

Have you ever thought of how much leisure time people spend on their smartphones or tablets playing mobile games to simply entertain themselves? The mobile in-game advertising market will help capitalize on this.

Mobile gaming industry is not the newest hit, it is already something common in today's Internet-savvy society, regardless the gender, age, education, or nationality. According to fresh stats, almost 70% of Americans play games using at least one type of mobile device, while 90% give preference to their smartphones. The researchers predicted that by 2020 the number of mobile gamers is expected to reach 213 billion.

In this regard, game advertising has become a gold mine for advertisers that opens new opportunities in the mobile in-game advertising market. So, here are 2 options for in-game advertising: to make users' games experience more pleasant and enjoyable or to spoil an impact by intrusive content. Let's find out how to achieve the right results.

Freemium Versus Free to Play

Basically, a freemium game is an app that a user can download for free. After a while, it may require some purchases in order to add extra functions, new app features, or a game upgrade. Thus, if a freemium game contains ads the user can disable them by paying additional costs.

Conversely, in the Free to Play game version (F2P) users cannot exclude in-game advertising throughout the whole game process. Frequently, an excessive number of in-game ads in free to play game versions can cause a lot of annoyance so the player can opt for another one. That's why it is always important to calculate the right balance beforehand.

Static or Dynamic? Which in-game ads are better?

Static advertisements are embedded into an app during the development process. They are implemented directly into the game storyline and could be shown without an Internet connection.

Advertisers can decide how they want their ads to be displayed in a game. However, this process can be too time-consuming with no ability to make necessary updates in real time. Sometimes advertisers can find it hard to be on the same page with user behavior. 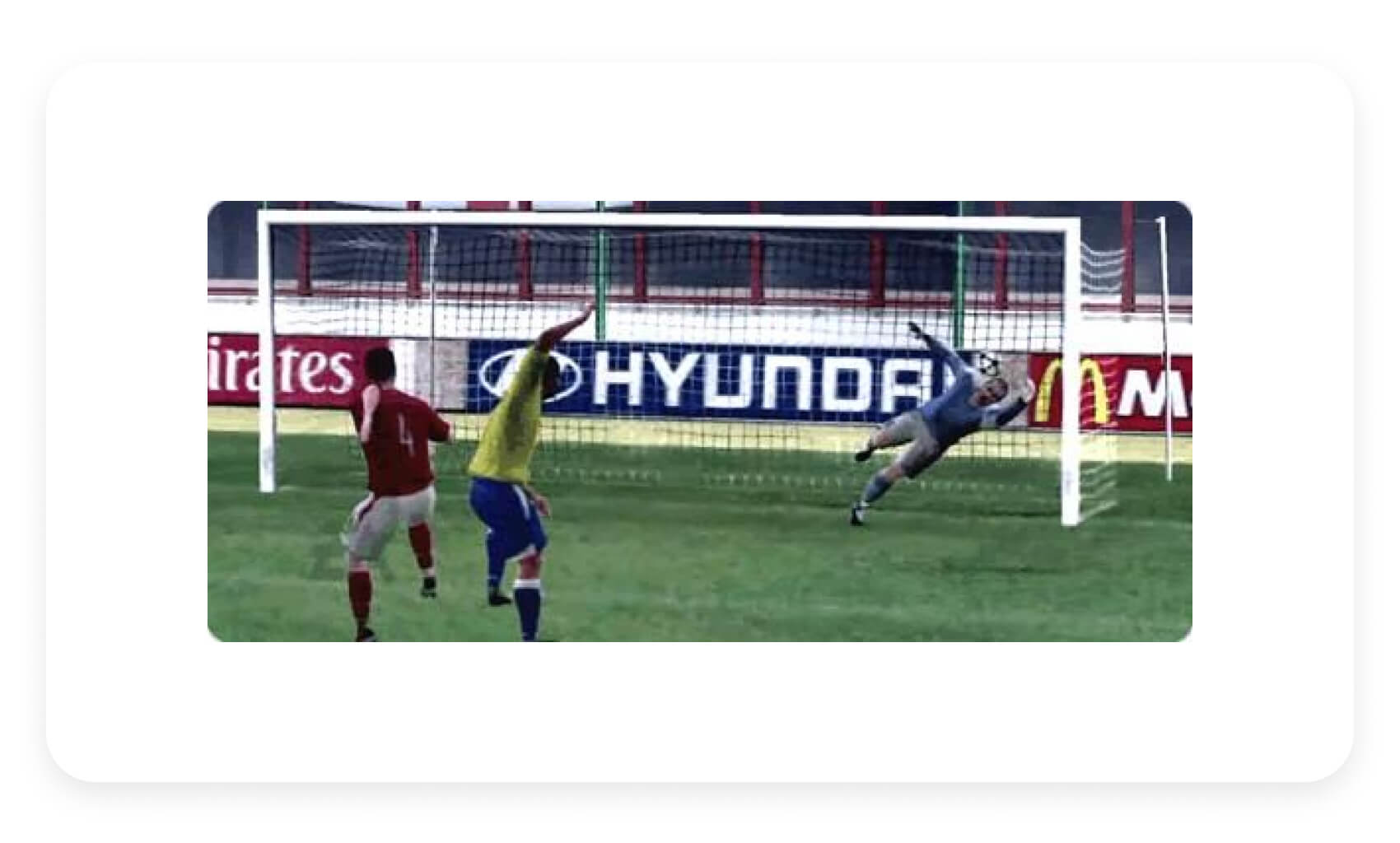 Yet static ads are still effective as it works the exact same way as advertising in real life, e.g., how we perceive ads looking at billboards or banners in the streets. And static in-game advertising rates continue to rise because new iterations of previously released games provide more options for customization. Static ads are expected to generate $6,365.3 million in revenue by 2028.

Other regularly used types include dynamic ads. These ads are placed dynamically throughout the game in the form of the same billboards or banners displayed in all shapes and sizes.

Probably the biggest benefit is that they can be removed or inserted into the game flexibly in real time. Dynamic ads are a perfect fit for time-sensitive or time-limited marketing campaigns. But, unlike static ads, dynamic ones cannot be displayed without an Internet connection.

Dynamic in-game advertising gives advertisers greater flexibility and easy scalability. It can also be used to geo-target users who subscribe to the email lists.

Another reason for the popularity of dynamic ads with advertisers is the variety of ad formats. 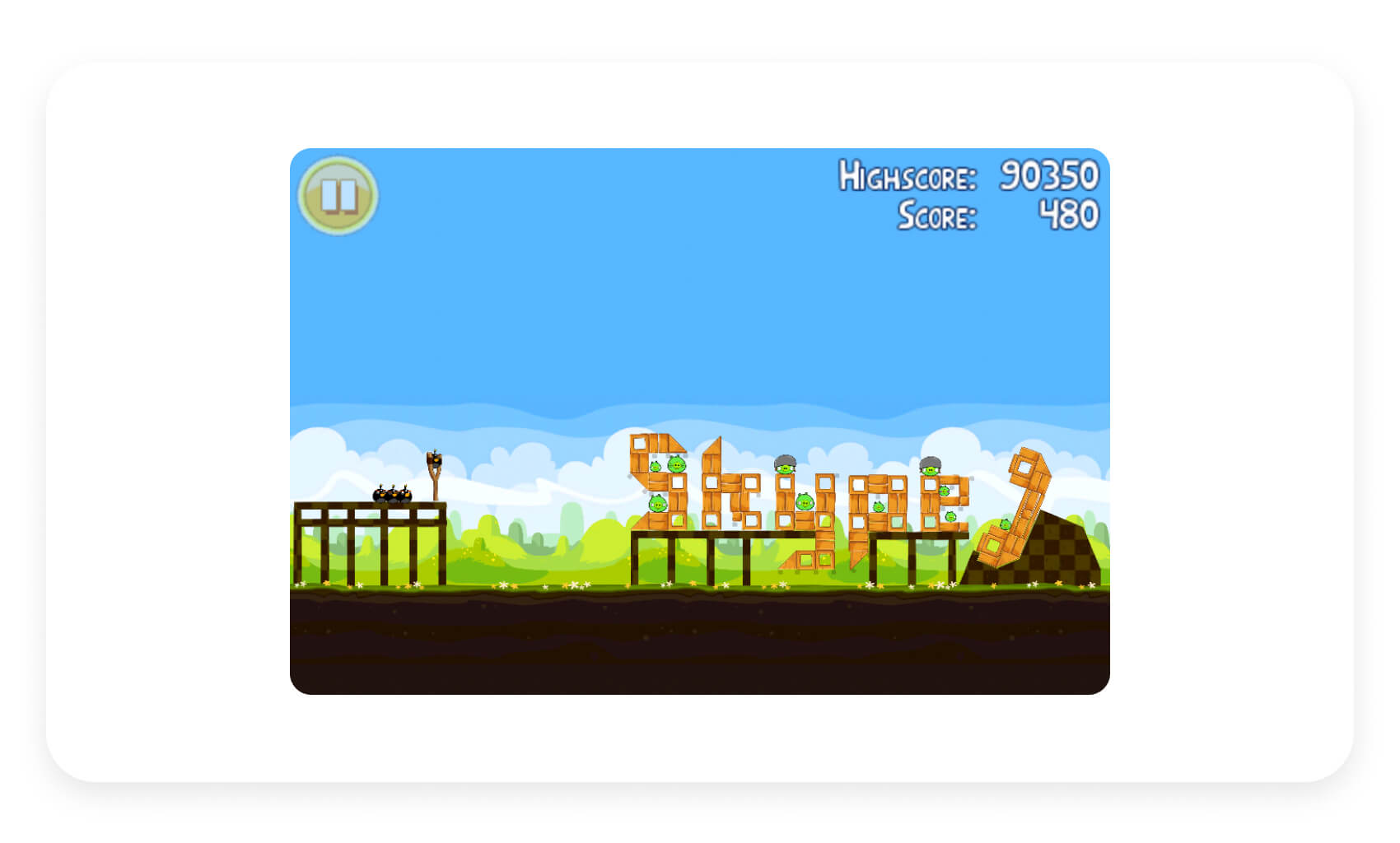 The main types of in-game ads

Interstitial in-game advertising is a full-screen ad format that covers the whole interface of an app. These ads appear naturally between breaks at the transition to the new game levels. Without actual game interruption, they pop up to cover the whole screen too.

That's a great chance for advertisers to enrich their media with interactive content, engaging media, add animations, videos, etc., and to make the retention rate higher.

However, these ads work well only if designed and deployed wisely. Implementation requires professional and creative skills alongside an in-depth understanding of how mobile gaming works in general (understanding human perception and mindset).

The appearance of native banners on the screen is similar to the appearance of ad banners on web pages in the sense that they seamlessly blend in with the background on which they are placed so that the ads are non-intrusive. Unlike video banners, native ads are embedded and therefore appear as part of the content.

By 2025, it is expected that worldwide spending on native advertising will reach $400 billion.

Contextual advertising is shown to users based on their behavior at the time of display. Advertisers flag specific topics and keywords in their digital media source, which then runs algorithms to match ads with relevant content, keywords, topics, and images.

Contextual advertising is growing in popularity because of changes in privacy rules about the type of information advertisers can collect.

Expandable in-game ads are those that are displayed in a collapsed form and the user has to tap on them to see them in their full form. Such advertising does not annoy users because it is always collapsed. At the same time, it gives a good conversion rate: only interested users look at it.

Advertisers should be careful with setting too much on expandable ads. These ads cover the whole screen. When the user taps on them too often such “taps” are just accidental. To unveil their creative potential, expandable ads should be clearly marked and deployed, while alerting the users about the gameplay interruption. 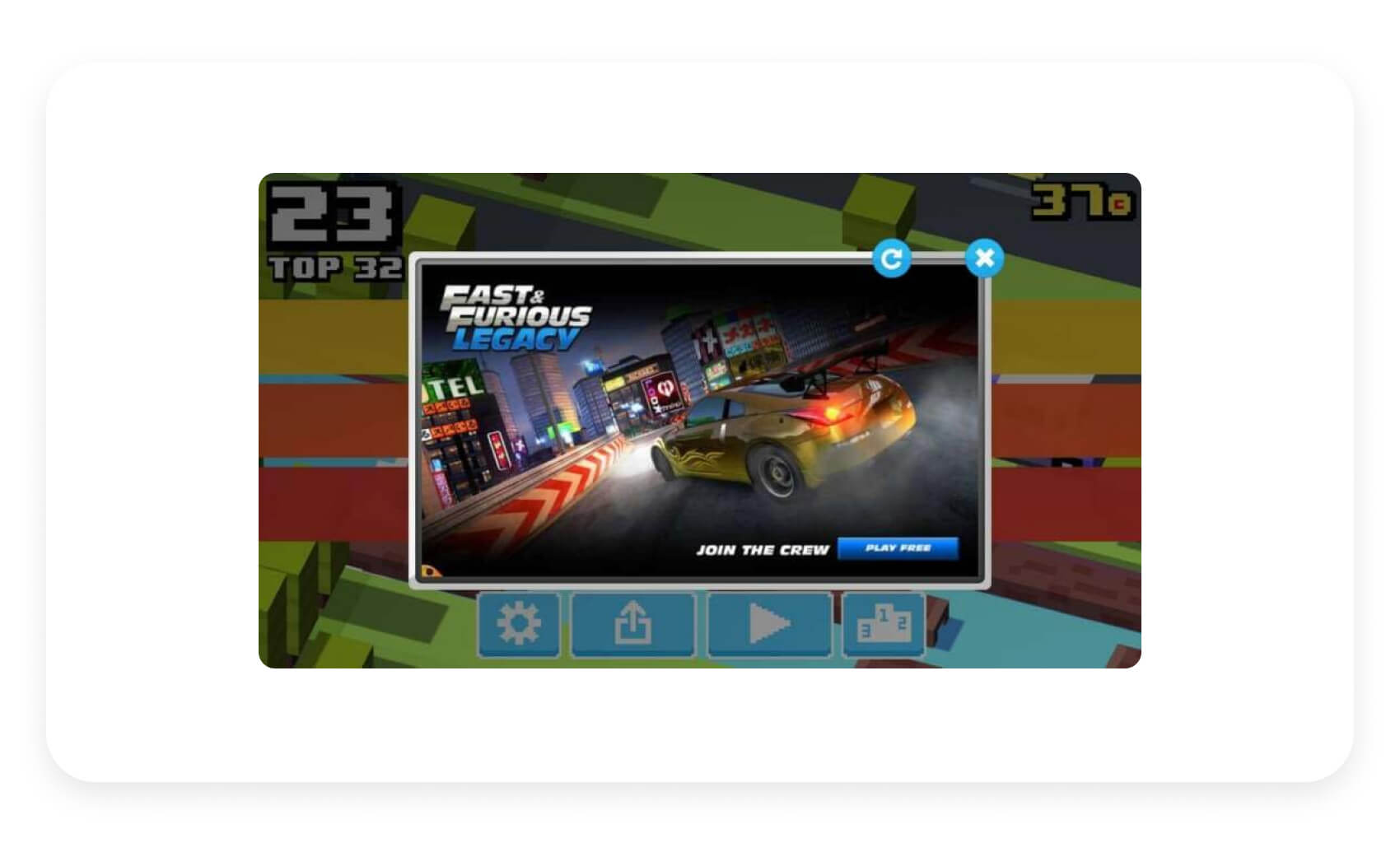 Rewarded video game advertising can also be implemented in the game flow. It tends to bring higher view rates, but here's the thing to remember — users won't stop the playing process to see video ads that exceed 30 seconds in length. In such a scenario, it may lead to a negative experience while dealing with your ads.

To avoid the view rate decrease, the users should get rewarded ads. In this case, you offer the user not just to watch the video, but to watch it with a reward.

Rewarded video ads give users some in-game goods if they watch the ad in full-screen mode. After watching a 15- to 30-second rewarded video ad, users can get in-game currency, extra lives, additional levels, and so on. Users prefer watching video ads with rewards in the form of in-app purchases. 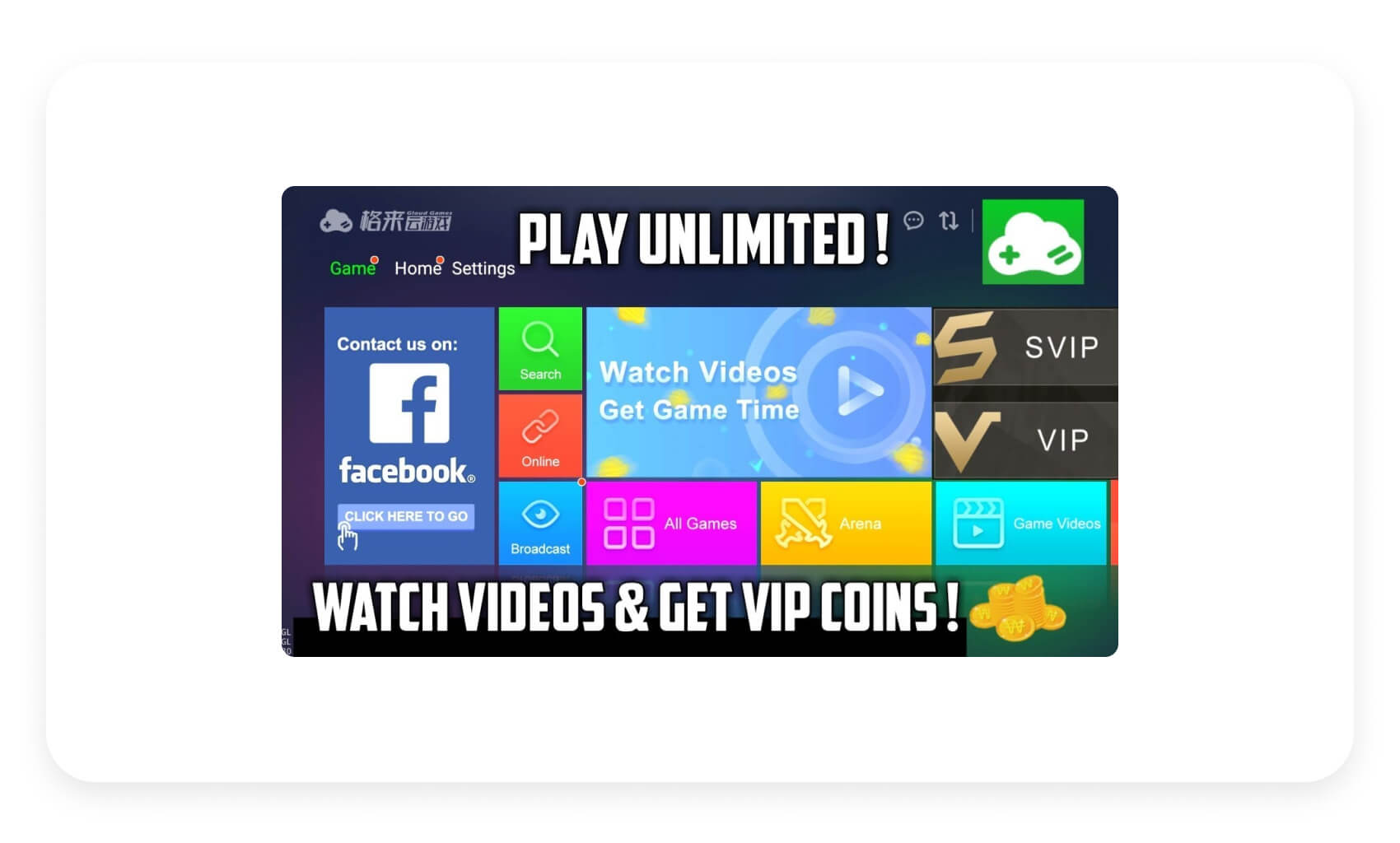 The concept behind advergaming means that the entire game is created by an advertising company, that promotes its products or services using the game. To tell a brand story through the whole game or video is probably the best way to offer an immersive experience. Advergames allow users to get fun and positive emotions as well.

That's definitely worth the costs spent on game development. This type of advertising can also be recognized as playable ads. 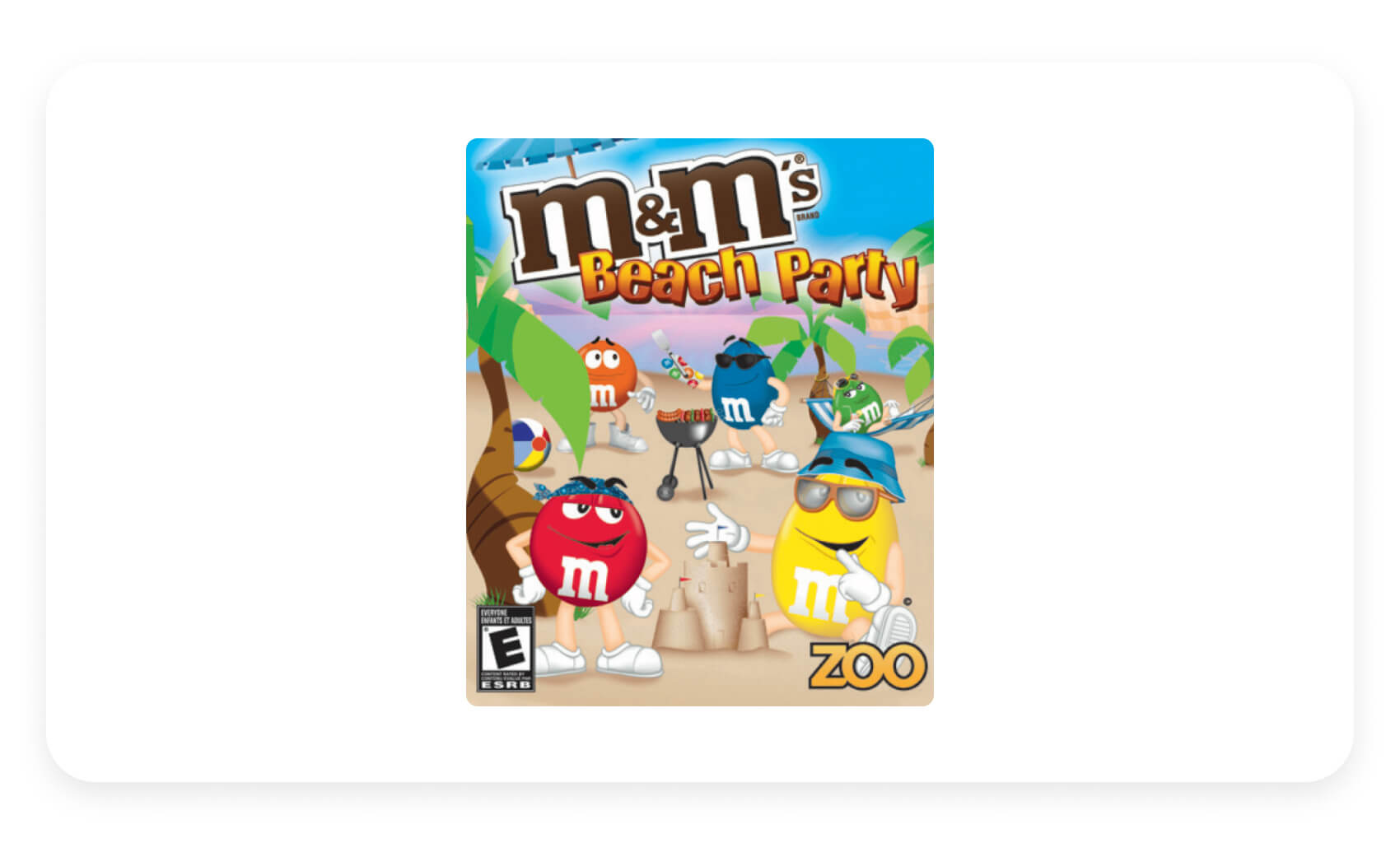 A demo video ad is an interactive video ad, a type of playable ad. This format allows users to see a short preview of a game application before deciding to download it.

The cutscene shows the basic features of the app so that users can "try it before they buy it". In this way, demo video ads give an audience of players an idea of how the app works. This tends to reduce the app's deletion-to-installation ratio and increase retention.

What else matters to the in-game advertising market

The global in-game advertising industry is projected to reach $13,990 million in revenue by 2028. Here is what's important for marketers and app developers alike to know:

Know your gaming audience. According to Statista, by 2025, five out of ten people will be playing mobile games. Gaming is no longer a niche market, nor an in-game advertising market. For example, in the U.S., 55% of women play apps on their mobile devices, while only 45% of men are playing.

Pay attention to how you advertise. Where and when your ads appear can make or break a great user experience. The golden rule of ad placement is never to interrupt the user experience. There are three least invasive opportunities: before the game, during a natural pause in the game, or after the game ends.

Measure and optimize. In the highly competitive mobile app gaming environment, it's critical to closely monitor your in-game advertising campaigns.

How can advertisers conquer the gaming ad space?

Many game developers are afraid that the attention of the user will be distracted by advertising, and that is why they refuse to monetize the game. However, as we said above, there are many formats that do not confirm these fears and work exactly the opposite.

If you incorporate in-game advertising into your brand campaign, it's better to leave all the efforts to a full-featured solution for your ads to be fitted as naturally as possible with a suitable format. Feel free to contact our experts who will assist you in choosing a mobile ad format that fits your KPI best.

SmartyAds mobile advertising platform is designed for advertisers who seek control and transparency along with new, out-of-the-box solutions to reach the target audience through effective ad campaign deliveries.

Written by
Irina Kovalenko, CMO of SmartyAds
October 2019
rate this article
share with friends
Previous Article
next
Generating High Ad Revenue With Interstitial Ads: 5 How to Guidelines October 2019 Next Article
previous
Advertising Challenges in 2020: How to Get Around Ad Blockers? October 2019

Trending In App Advertisement: A Full Guide (Updated 2022)
Everything You Need to Know About Mobile DSP