When digital advertising entered the ‘manual placement’ stage, it was managed by the same principles as offline. The marketer or agency took the phone and called the owner of the website, which was usually associated with an offline magazine or newspaper. They agreed on a price, signed an agreement, and the advertiser sent the banner to the publisher.

However, as more publishers and advertisers entered the digital advertising market, new technologies were designed to organize the whole process. Starting from ad servers and ad networks, it then developed into a huge variety of RTB-based programmatic advertising platforms like ad exchange, SSPs, DSPs, and others.

Specially for National Programmatic Day, we decided to make a small journey into the history of ad tech to understand the roots of it.

Major events in the ad tech

www.hotwired.com is a website that started a revolution in digital advertising. On October 27, 1994, it launched the first in the world ad banner. This banner space was purchased by AT&T to promote its new technologies. It was extremely effective: CTR was about 12%, which was insanely high judging by today's standards.

The strategy was so successful, it caused huge demand from advertisers. As a result, in 1996 the first elements of the programmatic ecosystem - ad servers were created, DoubleClick among first ones. However, it was still not enough for such a fast-growing industry, so in 1998-2000 first ad networks started to emerge. Meanwhile, as ad market became more and more saturated with regular ad banners, interactive banners started to join the race in 2004, adding to the list flash, javascript, video ads, and interstitials.

Finally, in 2007 ad market took the shape we are all familiar with today. It was a time when ad exchanges came in. This technology made it possible to automate ad sales and purchasing. Between 2007 and 2010 major ad exchange companies developed the concept of programmatic the result of which was the rise of DSP, SSP, and other RTB-based technologies.

Since 2010 the media-buying process changed drastically. What we have now is a huge amount of ad formats, trade platforms, and technologies, created to provide diversified set of services for any type of business.

They were joined by push, rewarded audio and playable ad formats in 2018. As for device usage, mobile advertising share is growing at an enormous rate, threatening to overcome desktop in the near future.

When it comes to marketing technologies developed by this time, we’re close to 7,040 solutions in 2019, as compared to just 159 in 2011. Indeed, the marketing world has changed a lot throughout this decade, as new trends conquer the market while pioneers of the industry become history. One of such examples is DoubleClick, which was purchased by Google in 2008 and then merged into Google Marketing Platform together with a couple of other services.

The future of programmatic

According to Emarketer, around 88% of all digital ad spending in the US will be programmatic, which accounts for $81.00 billion. The leaders in those investments will be video, social and native ads, as well as mobile ad formats.

To be more specific, 5% or 3.8$ are expected to be spent on connected TV ads in 2019 on the US market which will cover broadcast TV, video on demand, as well as streaming services such as Netflix. This trend is likely to continue in 2020 and subsequent years so it might be worth considering to pay attention to the programmatic TV.

At the same time, audio advertising is likely to grow rapidly with streaming services, such as Spotify and SoundCloud reaching 170 million and 175 million of monthly active users respectively in 2018. Moreover, 90% of US customers report that they listen to the radio on a weekly basis which provides another huge space for advertisers to use audio programmatic.

There is also good news concerning data processing and spending optimization, as artificial intelligence(AI) is quickly improving to provide more and more opportunities to programmatic platforms. It is reported, that 47% of advertisers already use AI for audience targeting and 38% for personalized offers as of May 2018. About 30% are planning to use it for campaign planning and modeling in the near future, so one can expect significant advancement of the technology in the years to come. 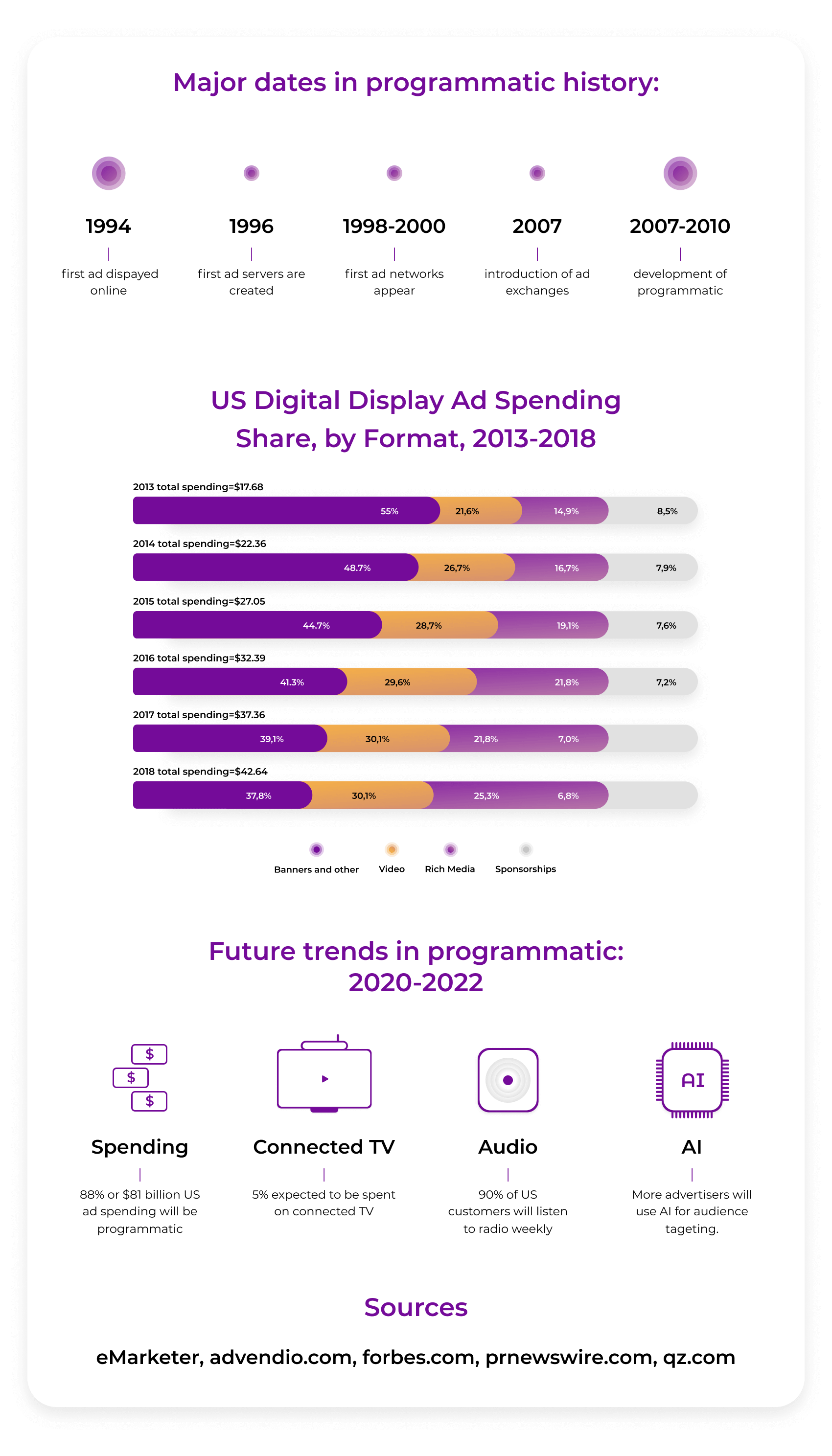 Be the first to pioneer the future of programmatic with SmartyAds! Whether you are an advertiser or a publisher - we have the best innovative solutions.

What Is Programmatic Audio Advertising and How Does It Work?
The Evolution of Advertising: From 1971 to Present Days
What is the Difference Between Adtech and Martech