The world of advertising is huge and varied; everyone who has ever encountered it is familiar with the concept of out-of-home advertising.

Digital Out-of-Home is also the ads in public places, but with AdTech technology that includes geo-fencing, targeting, retargeting, personalization, attribution, and metrics.

Let's imagine for a moment a world where you wake up in the morning, have a cup of your favorite coffee, and leave your apartment to go to work. In the elevator, the digital signage shows you an advertisement for this summer's most profitable tourist destinations and you think you should take a vacation. At the bus stop, the ads show tourist destinations again, and on the bus itself, you see advertisements for flight search services...

Do you know what I mean?

The whole digital ad world adjusts to the users not only within the screens of their devices but also on the street. Targeting tools previously available only for digital companies are gradually making their way into the world of out-of-home advertising as well, bringing the future world a step closer.

The move to DOOH will change the world of traditional advertising and OOH advertising forever. It will remove the intermediaries between the customer and the direct ad placement, speed up the display advertising process and increase the accuracy of targeting.

How DOOH is different from OOH advertising

The main difference, of course, is the digital elements of DOOH ads. While OOH ads are displayed on static billboards and can only be changed after a certain period of time, as they target large masses of people but no one in particular, DOOH ads are displayed on the digital billboard with dynamic content of multiple animated images and remain on them for a short period of time.

Such ads are able to communicate with its viewer, they are more interactive and thus more captivating.

Why DOOH advertising is important and profitable for brands

Digital out-of-home is growing much faster than other types of digital advertising. The reason for this rapid development is the capture of the target audience and the effective targeting that such ads provide.

Statistics show that in 2020, due to the pandemic, spending on outdoor advertising dropped dramatically. From $39.42 billion in 2019, they dropped to $29.69 billion. 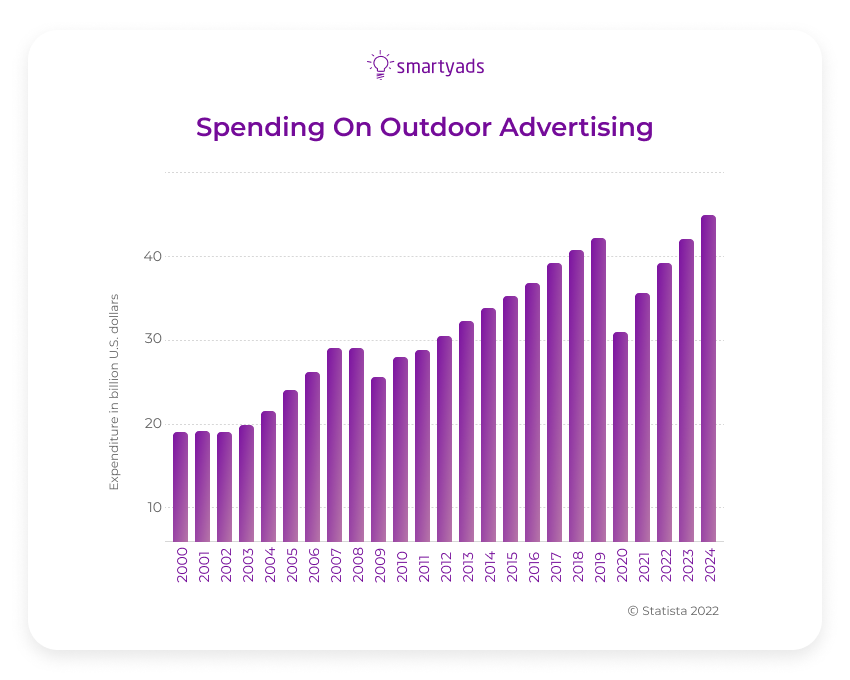 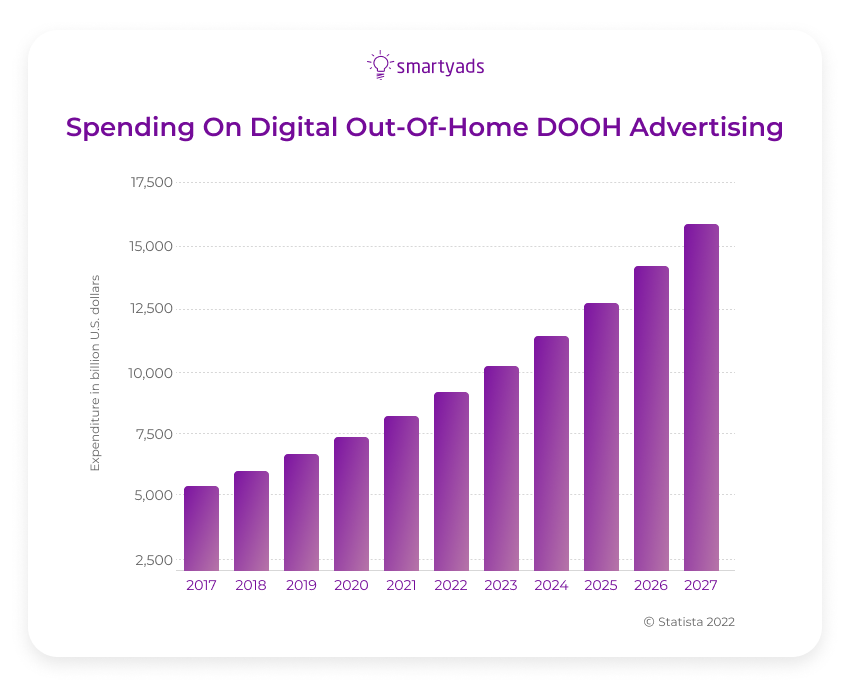 The global digitalization of cities and towns is transforming DOOH advertising from an innovation to a necessity.

Transportation systems in many countries are already equipped with screens with useful information on which ads can and should be placed. That is why DOOH advertising is developing at such a rapid pace.

More than a decade ago, Broadsign launched the first programmatic out-of-home advertising exchange in Canada. Vistar Media, launched in 2012, owns 90% of the digital out-of-home DOOH advertising resources in the U.S.

Outfront is building the platform on the supply side, and Lamar is considering doing so as well.

All of this means that outdoor advertising can already be managed through digital tools, but quite a few advertisers are aware of such an opportunity.

Programmatic DOOH advertising is a system in which humans have little or no involvement in the ad buying-selling process.

A brand can place its ad campaign on the Demand-Side Platform (DSP), and after that, it goes to RTB, where it is decided on which of the platforms is most profitable for the advertiser to place it. The highest bid always wins on the exchange.

The platforms on which online ads can be placed are provided by the Supply-Side Platform (SSP). These are proven publishers that are carefully selected by the advertising platform, as a profitable ad exchange will benefit everyone involved in the process.

What programmatic advertising tools are available with DOOH

RTB is an auction-based bidding protocol in which advertisers compete against each other to show ads to specific users. RTB is considered to be one of the most flexible models of interaction between advertisers and advertising platforms because it includes a lot of tools for adjusting and targeting specific users.

This model is very similar to the traditional way of interaction between the advertiser and the platform when representatives of both parties meet to sign a contract. However, in this case, advertisers and publishers agree on specific inventory based on a fixed price per thousand impressions.

This is an auction where only a few advertisers can bid. In such auctions, the publishers are very popular and well-known portals or sites for advertising space in which lots of advertisers are really willing to fight.

This auction requires the greatest presence of the human factor. To use this tool you need to understand perfectly the needs of your customers, know what they like and how they prefer to spend their time.

Inventory is sold at a fixed price per thousand impressions. The inventory is "guaranteed" or "reserved" for the customer. 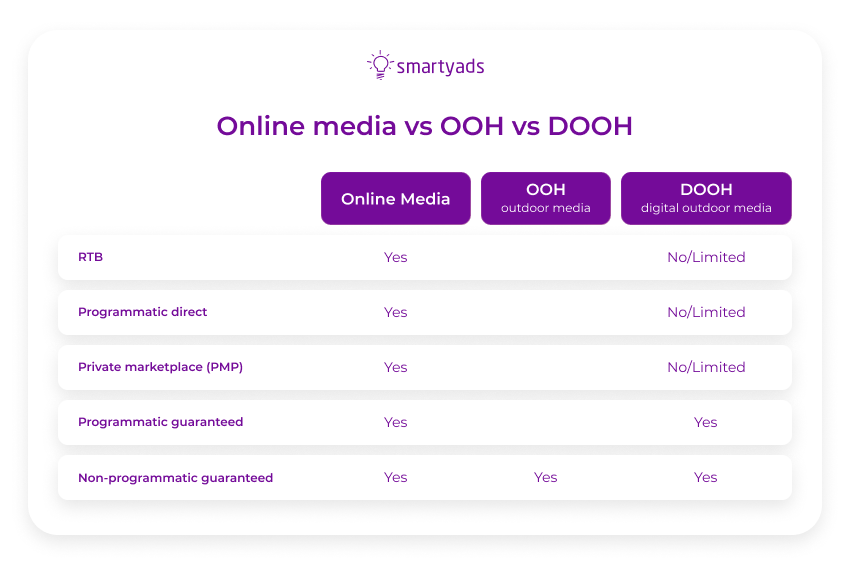 DOOH visibility is difficult to measure

Mobile location data for a certain device can give advertisers some idea of the traffic near a particular ad, but these will all be very rough numbers. The only thing we know for sure is that OOH ads are seen by a lot of people.

There are attempts to solve this problem. For example, an ad campaign with facial recognition from Posterscope USA and partners Quividi, EYE Corp Media and Engage M1. But such innovations are not too welcomed by customers, because such advertising can violate the privacy of their lives.

Since outdoor advertising does not borrow the user's mobile device to display its ads, it has quite a tangible location for ad space, which means it is real estate. And real estate is notoriously expensive.

This is one of the reasons why the owners of outdoor ad screens are not in a rush to put them up for auction because the cost can drop significantly compared to the expected price.

The current capabilities of digital marketing allow you to set an approximate number of eligible target audiences that pass by a potential ad place every day.

Marketers can even set a time at which the greatest number of people they want will be at that location.

However, it is not possible yet to set up an ad campaign to show it to a specific person or specific group based on audience demographics. Like any other campaign, marketers are left to look at the number of OOH ad impressions and compare it to conversions at all stages of the ad campaign.

The benefits of DOOH advertising

In every city, there are several places to display DOOH advertising: downtown, bus shelters, shopping malls, train station, commercial hubs, etc. These public spaces usually have digital billboards on which the ads can be displayed.

With network operators, you can get a rough idea of the behavior and reaction of users to your advertising and brand in real-time.

For example, at a train station in Euston, an advertisement against domestic violence was shown on digital signage. The husband in the commercial acted very violently and repulsive. NCDV, who ran this ad, asked users to go to their site and stop the husband virtually, thus increasing user engagement with the subject of the ad.

Content is vital to attracting customers. The more creative the ad, the more likely it will catch on and therefore increase brand visibility in the marketplace.

If the displayed content aligns with consumers' thoughts and values, companies can encourage them to engage more with the brand's products.

For example, during the Gay Pride event in Israel, Facebook partnered with the Tagbox social wall to install multiple digital screens in Tel Aviv. The screens displayed Instagram posts about the LGBTQ+ community. People were invited to share their experiences and cheer up people around them with these ads.

Standard DOOH ad campaigns are really hard to personalize, as not many people would agree to a facial recognition system built into every digital signage.

However, if you use advertising tools with enough creativity, you can turn them into a great opportunity to increase brand loyalty and attract new customers and the right audience.

For example, coffee brand Douwe Egberts installed a digital screen with facial recognition at OR Tambo International Airport. The system analyzed a customer's facial expression and gave free coffee to those who yawned. A very elegant use of technology, which is usually poorly perceived by the audience.

In recent years, the effectiveness of online media advertising has been decreasing, and the click-through rate (CTR) has been falling for a great many of the major online advertising platforms. Facebook, Instagram, and Twitter ads are clearly not having the best of times: 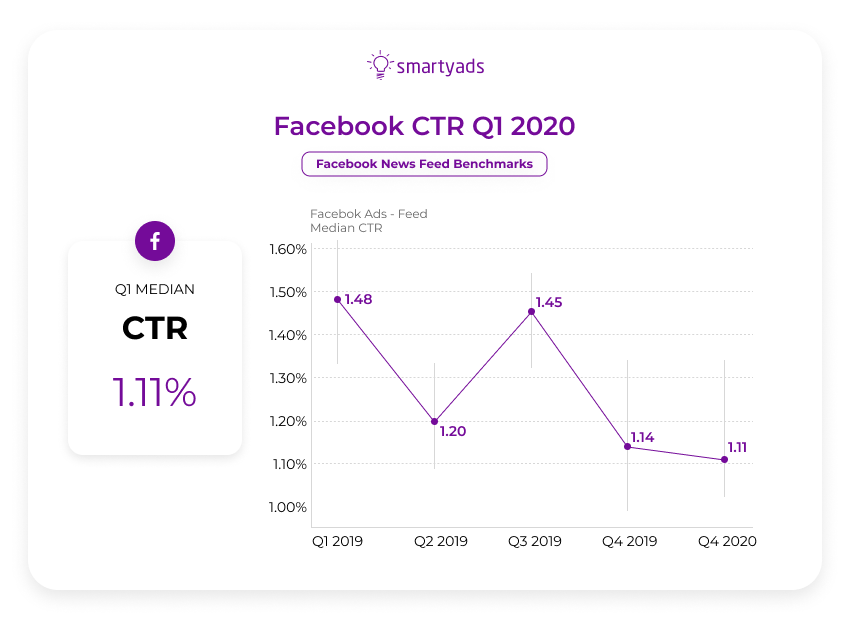 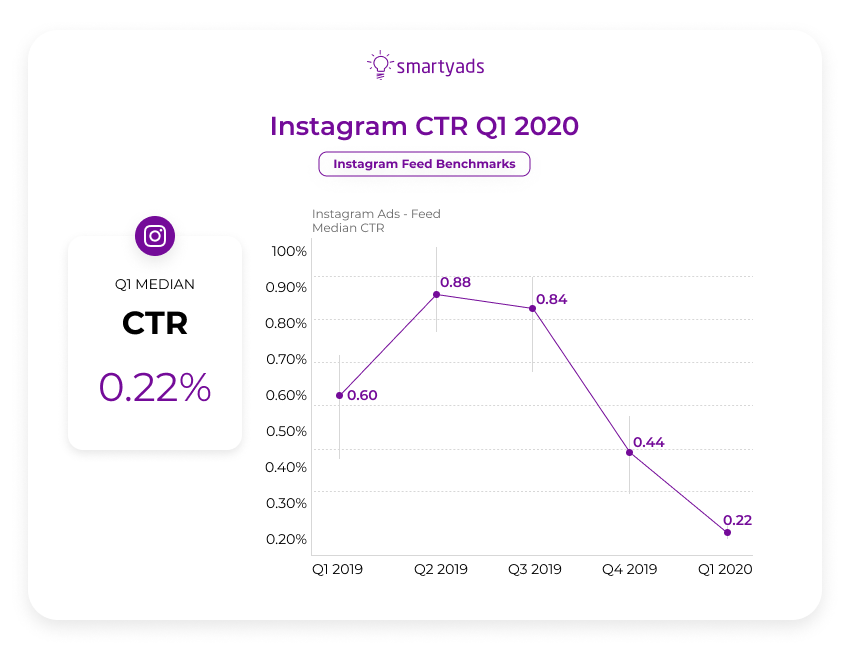 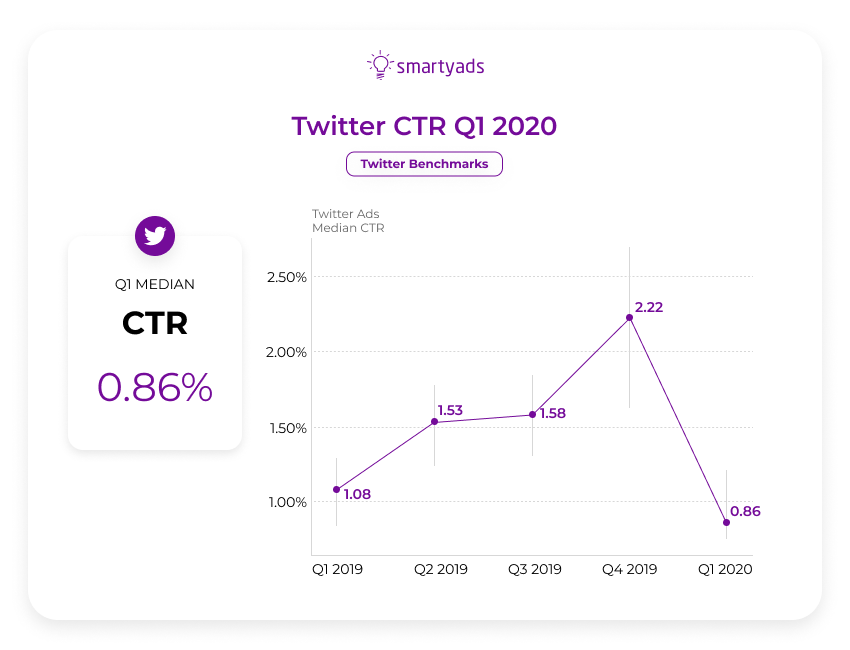 The data show that standard media advertising needs to be rethought and renovated. DOOH campaigns can solve the engagement problem. Static billboards are usually placed in public spaces, and all you have to do is draw people's attention to them.

How? It's up to you. We can only show you how others do it.

Lancôme launched a DOOH campaign in Portugal to fight gender inequality in education. The slogan of the campaign was the hashtag #ShareASmile. Digital screens placed in a public environment incorporated facial expression recognition. For every smile of a woman in front of interactive digital signage, the brand donated a euro to a scholarship fund for girls.

What is the future of DOOH advertising?

The way digital out-of-home advertising is now, is only the beginning of what it will become in the future with the subsequent development of technology.

However, we can already see the potential and benefits of DOOH advertising. Like any other method of advertising, DOOH advertising has its disadvantages, but they are very easily offset by a creative approach and competent use of modern technology.