Digital video advertising is growing at an unprecedented speed, accounting for 35 percent of total digital advertising spending. And for good reason: Video ads turn viewers into fans and fans into new customers. But marketers are only just beginning to uncover the power of video advertising.

People like video because it has the capability to deliver a multisensory and emotional experience. Unlike print and radio, video creates a unique experience and communicates the message in a dynamic format. Video engages a viewer on an emotional journey, triggering a feeling and eliciting a response, which makes video ads the perfect way to make personal connections with potential and existing customers and facilitate brand loyalty.

What Is In-Stream Video Advertising?

“an ad played before, during or after the streaming video, animation, gaming and music video content that the consumer has requested (pre-roll, mid-roll, post-roll). In-stream video ads appear in a player environment and appear in live, archived, and downloadable streaming content”.

In-stream video ads are normally 15 to 30 seconds long; however, 15 seconds is considered optimal. All recently introduced interactive formats were designed to improve the user experience.

For instance, the vast majority of in-stream video ads now have a “Skip This Ad” button. Because in-stream ads may interrupt a user’s online experience, skippable ads give a choice whether to watch the ad until the end or skip it if the user is not interested. Skippable ads are more effective because they give viewers the freedom to choose, which results in higher tolerance and more positive attitudes toward the ad.

The default pricing model for in-stream video ads is cost-per-view (CPV) bidding. With CPV, advertisers pay for complete video views, such as if a user watches 30 seconds of the ad, or for interaction, such as mouse clicks on call-to-action overlays, banners and cards. (Much more information about ad pricing models you can read here)

Warning: It is important to remember that in-stream ads may appear as an unwelcome distraction for the user; therefore, the video must be captivating, clear and attention-grabbing, — within the first five seconds. Most savvy marketers are aware that targeting criteria are of utmost importance. Users will most likely skip the in-stream video ad if it has little or no relevance to them or the video content they are watching. Using filtering and targeting is highly advisable.

What Are the Types of In-stream Video Ads?

Digital video ads are divided into two different formats — linear and nonlinear — and either format may include a companion banner ad that is displayed outside the player.

Linear video ads: These are the most basic format of in-stream video ads. Just like TV commercials, they interrupt the main video content. Linear ad formats may include an interactive component or be followed by a companion ad. Linear ads take over the full video played space. They are called linear because they are played “in the line” subsequently with the content. There are three types of linear video ads:

Mid-roll ads have the highest completion rates because the viewer is already engaged with the content and is more likely to sit through the ad to finish consuming the requested video.

Linear ads may also contain an interactive component, such as options for signing up for a newsletter, clicking for more information or downloading a demo file. Interactive video ads are a mixture of video, text, static images or animations.

Nonlinear video ads: Often referred as “overlay video ads,” these type of ads run simultaneously with the streaming video content, so the user sees the ad without interruption. Nonlinear ads could be presented as static images, rich media, text or video. Ideally, nonlinear ads cover a small portion of the screen and aim to invite the user for further engagement. If the user engages with the ad, the video will be paused until the user closes the ad. If the user does not interact with the ad, it may disappear, minimize to a reminder button or stay persistent for the rest of content play.

Companion video ads: These type of in-stream video ads are usually played alongside the video and could be in the form of text, image, rich media or wrapping. Companion ads are of different formats and size, and their primary goal is to sustain the visibility of the brand. Such ads do not appear on their own but accompany linear or nonlinear ads.

What Is In-banner Video Advertising? 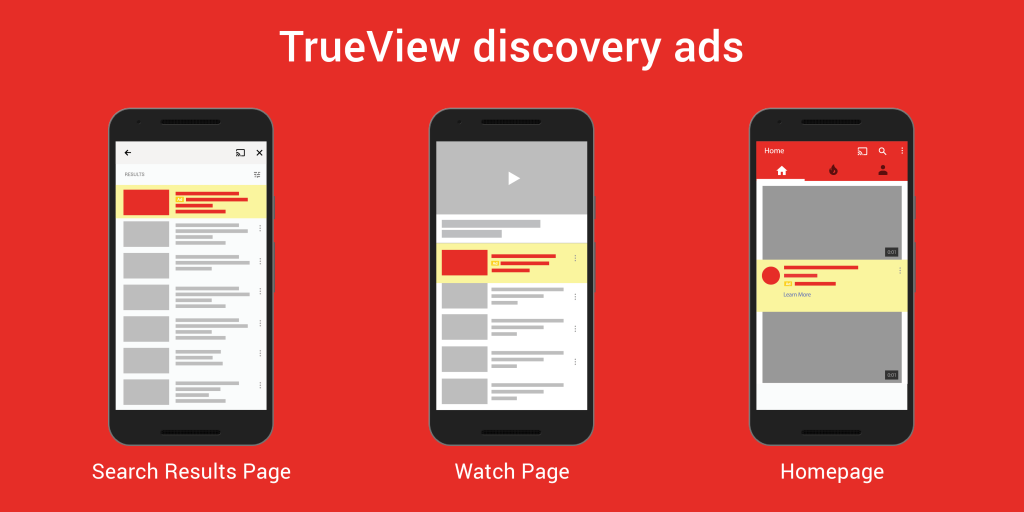 In-banner video ads, such as in-display, in-page video, video interstitial, incentivized video and in-feed video are banner ads (generally 300 x 250 pixels) with videos embedded in them that can expand to a large interactive panel or redirect users to the domain where these video ads are hosted. In-banner video ads consist of the thumbnail image (video screenshot) and a description (up to three lines of text).

The in-banner video advertising format is less popular among marketers than in-stream ads because it is relatively new. However, this type of ad can be spotted regularly on YouTube, across Google Display Network on a wide range of other websites. They resemble traditional Google ads with a catchy headline and supporting copy, which can be written to attract visitors. Clicking on an ad redirects the user to the designated YouTube page instead of playing the ad unit itself.

Compared to in-stream ads, which have length limitations, in-banner ads can be as long as marketers wish as long as the file size is no more than 500 MB. For maximum consumer experience, ads should be two minutes.

What Are the Benefits of In-banner Ads?

The major benefit of in-banner ads is that when users click on the video, they don’t fully realize they are clicking on the advertisement. The beauty of in-banner ad is that it doesn’t interrupt the user’s online experience. Instead, they rather appear subtly on the sidebar or on the top of search results. In-banner ads don’t force users to watch. They give them a choice to click or not to click. Compared to in-stream ads, in-banner ads are considered less intrusive; therefore, they are more suited for brands that want to promote awareness rather than achieve a pure acquisition.

Advertisers are charged on a traditional PPC (pay-per-click) model, which means only when a user clicks on the thumbnail preview and chooses to watch the ad video. This bidding style is fair because users viewing the ad must be really interested in the offer because they chose to click on the advertisement.

The placement of in-banner ads is highly dependent on the keywords of a user’s search query, giving advertisers the power to deliver ads to the most relevant users. This format could also be beneficial for effective targeting B2B clients or a narrower segment of the audience.

Don’t limit your options! We’ll make any video ad format and size work for you. SmartyAds has developed an advanced video ad formats for the new point of growing!

Written by
Irina Kovalenko, CMO of SmartyAds
February 2018
rate this article
share with friends
Previous Article
next
VAST vs VPAID? How to Select the Right Tools for Your Online Video Advertising February 2018 Next Article
previous
PPC, CPC, CPM, CPA, CPI and CPL: Which Online Ad Models Are Best? February 2018