CTV advertising actively changes digital marketing and digital advertising experiences. Unlike traditional TV, the Internet as a platform is universal in the ability to make content available from any spot in the world.

As traditional linear TV and even cable TV lose their former relevance, connected Internet devices are massively paving the way for flexible and selective CTV advertising. Time to find out how CTV ads are served now and how CTV advertising is enabled.

What is CTV advertising and how does it work?

No cable or satellite subscription is required. Connected TV is far broader than Smart TV. Thus, it means that a CTV advertising campaign can be supported by any Internet-connected device and will reach TV viewers everywhere.

So with CTV ads, people can see the same commercials they normally see on their mobile phones. Further on, we'll review how OTT and CTV advertising works. 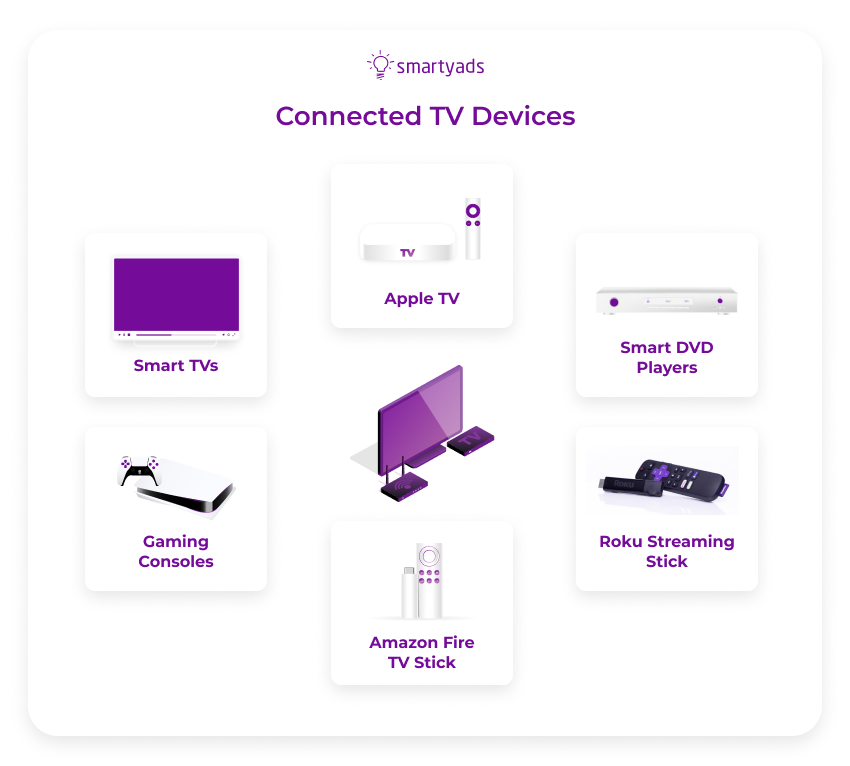 Connected TV (CTV) is the integration of the Internet and web 2.0 features into new-generation TV sets.

To ease the understanding of connected TV and digital advertising on CTV, you might regard the CTV as a hybrid TV or a merging of computer technology and linear TV.

Compared to traditional TV, which is primarily focused on media broadcasting, these devices like Smart TV's, Amazon Fire stick, and others) are all about online interactive media. CTV viewers access Internet TV, over-the-top content, and on-demand streaming media. 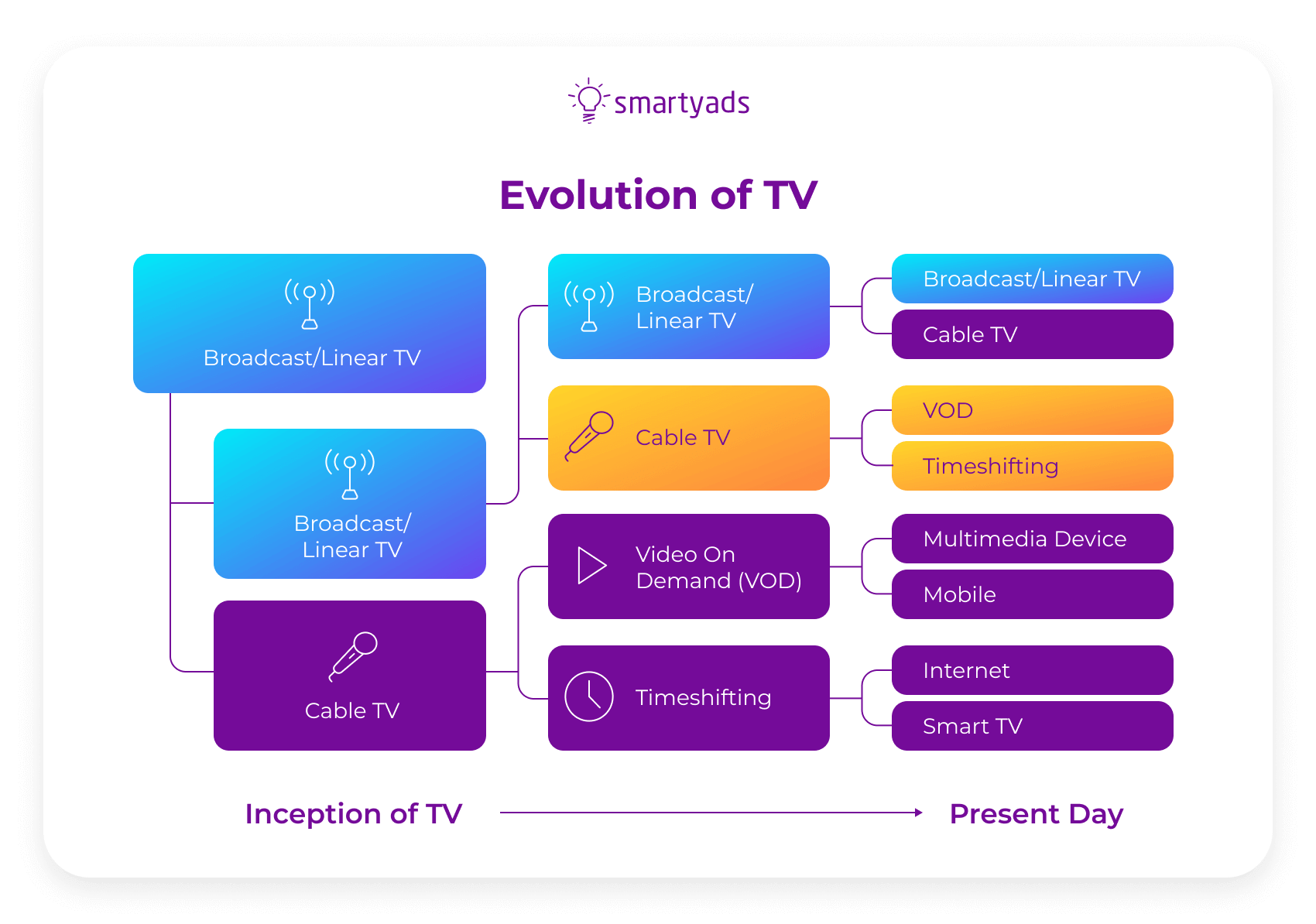 This scheme depicts the evolution of television. Judging by the picture you can understand how CTV advertising works now. When it comes to TV commercials, they can be delivered on every medium featured above, including linear/broadcast TV; the differences will be in technical nuances. 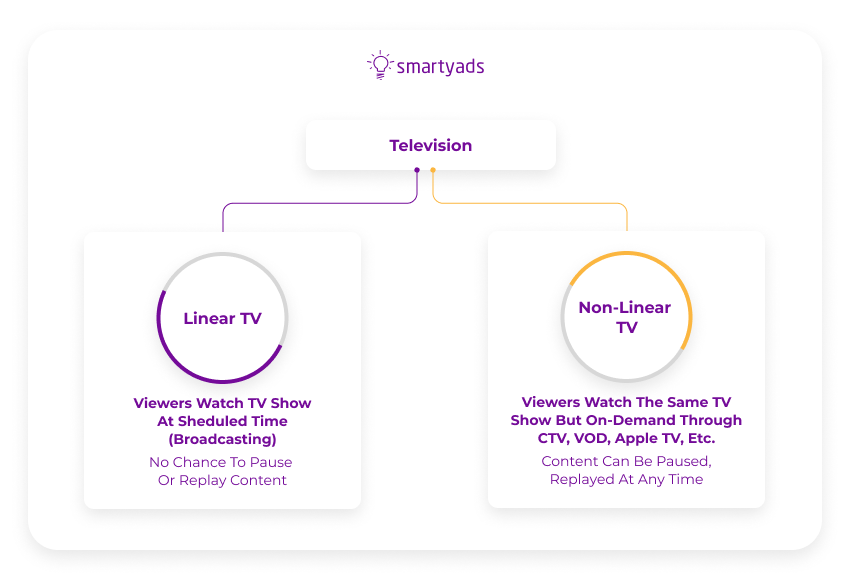 The difference between OTT and CTV/PTV

So, what are PTV, OTT, and CTV? It's important to know and understand how OTT advertising and connected TV advertising work.

It is a technology that supports addressable TV advertising capabilities. As was mentioned above, connected TV examples include streaming content via gaming consoles, from PlayStation to Xbox, online TV streaming services, and cable providers. This way, CTV represents the tech core for programmatic TV (PTV) support.

The TV connected with OTT (over-the-top)

It is the same Internet-TV content consumption, but it doesn't require an active subscription like cable or TV streaming services. However, users still need to have a broadband connection. It helps to reach the connected TV advertising market using top OTT (over-the-top) apps typically found in mobile stores.

Since both addressable TV and CTV connect to the Internet source, they can deliver digital ads on television programmatically.

PTV is a method used for broadcasting connected TV ads to the target audience using the advantages of algorithmic ad purchasing. Algorithmic purchasing is enabled by programmatic software. Such software is specially adapted for the brands and exists in the form of programmatic advertising platforms.

It can be either a connected TV ad network or a connected TV platform for advertisers (DSP). Advertisers organize ad placements on programmatic platforms tuning the dashboards according to their digital marketing objectives almost like they do for the web.

Programmatic TV is essential for CTV advertising. It helps to virtually serve ads on any device that has an Internet connection. Using PTV, the brand can deliver a specific commercial to a particular household. 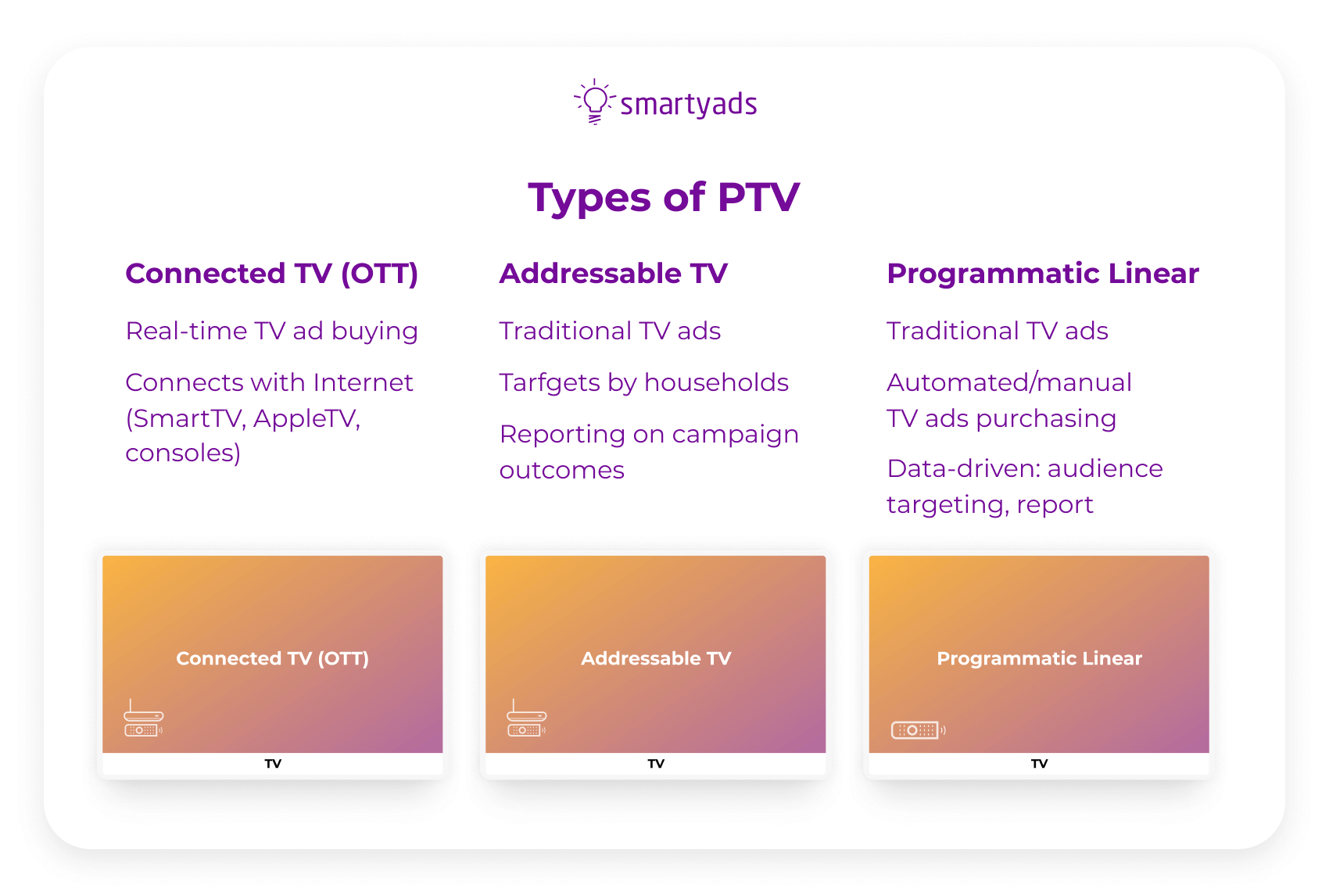 What is connected TV advertising in terms of programmatic auctions?

If we speak about the mechanism of how programmatic connected TV ads are served, we need to remember the specifics of the environment. Programmatic functions according to second and first-price auctions. Different programmatic deals have different terms and conditions regarding inventory access priority and necessary purchasing volumes.

The number of clicks is not very indicative when we talk about connected TV ad campaign performance. Because clicks will only measure interaction on mobile devices where the users can stream video content.

Yet, while the CPM of average video ads in normal circumstances reaches $10-$15, the CPM of connected TV ads pays off at $65. So, if CTV ads aren't the cheapest option, they can still serve as the most effective way to increase your video completion rate and decrease cost-per-completed-view.

How big is the connected TV?

More than 164 million U.S. Internet users access video content via connected TV devices, and this number is predicted to grow by up to 204.1 million viewers in 2022. The trend doesn't only encompass North America. The penetration of connected TV in the United Kingdom, Japan, Germany, and France will significantly grow according to the Interactive Advertising Bureau.

By 2025 it is predicted that local ad spending in the over-the-top OTT segment will increase from $1.18 billion to $2.37 billion. When it comes to CTV, eMarketer forecasts that ad spending here will reach $25.5 billion by the end of 2024. 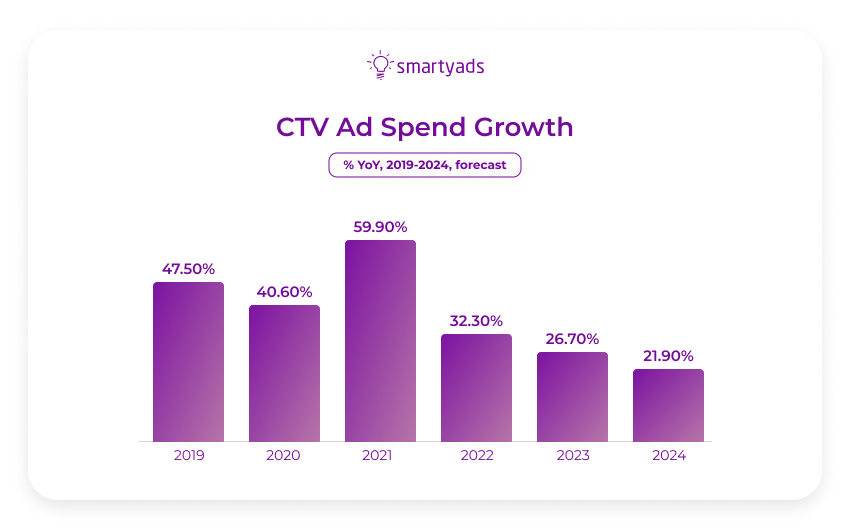 What is CTV advertising and how do CTV campaigns work?

OTT and CTV advertising appears on the screen like traditional TV commercials, the only difference is, TV viewing households will receive individualized ads while streaming the same show (based on their targeting data).

CTV advertising is a subset of the larger OTT advertising sector. In the nutshell, a CTV ad campaign makes it possible to personalize your digital marketing messages while the viewer watches content on different gadgets.

When ratings of TV channels are dropping, and price for the linear broadcasting climbs high, connected television provides a new medium to growing your audiences that never watch live television. Information about how customers behave on the Internet, what they bought earlier, their lifestyle preferences, etc., opens the gateway to endless advertising opportunities. 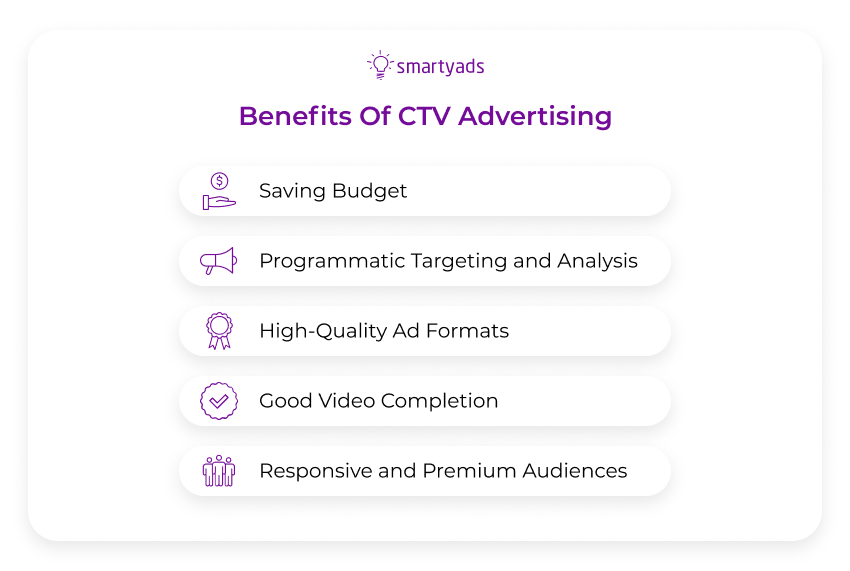 When users watch an ad on their personal Internet-connected device like a mobile phone, only one person can stream OTT content or see the digital advertising message. On devices called Smart TVs content is watched by several people.

According to statistics, your target audience will most likely watch smart television with family and friends, which significantly reduces the cost per impression for the advertiser. 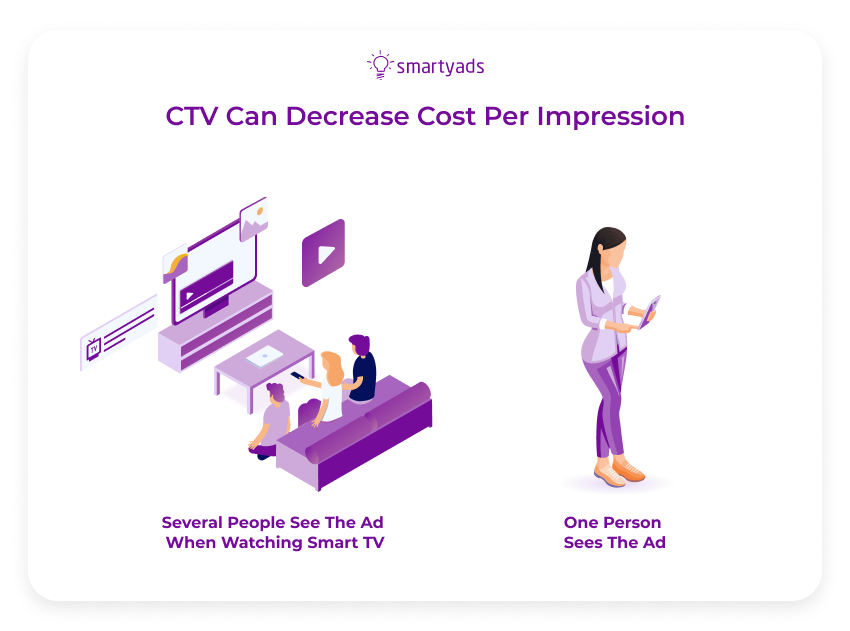 Targeting is one of the best-connected TV benefits. Brands can also retarget TV-viewing households. In order to use smart television, users are required to log in via universal identifiers such as Facebook or Google accounts (that gather data). 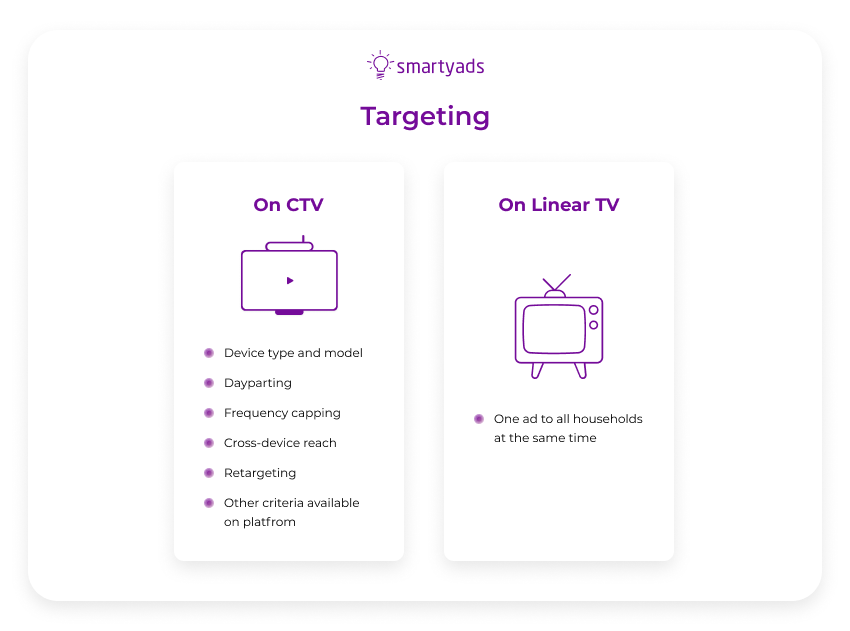 Connected TV advertising is highly entertaining. It allows marketers to experiment with animated, static, call-to-action, and interactive video ads that drive consumer engagement and increase the performance of the video content.

Connected TV advertising is a natural large-screen experience that results in high ad viewability. It imitates the traditional TV cable experience. Consumers not only pay more attention to CTV ads but also tend to watch them for a more extended period.

Connected users choose the content they want to watch and the way to consume it and interact with it. Such high levels of control trigger high levels of satisfaction among viewers, which leads to a better perception and positive attitudes toward ads. 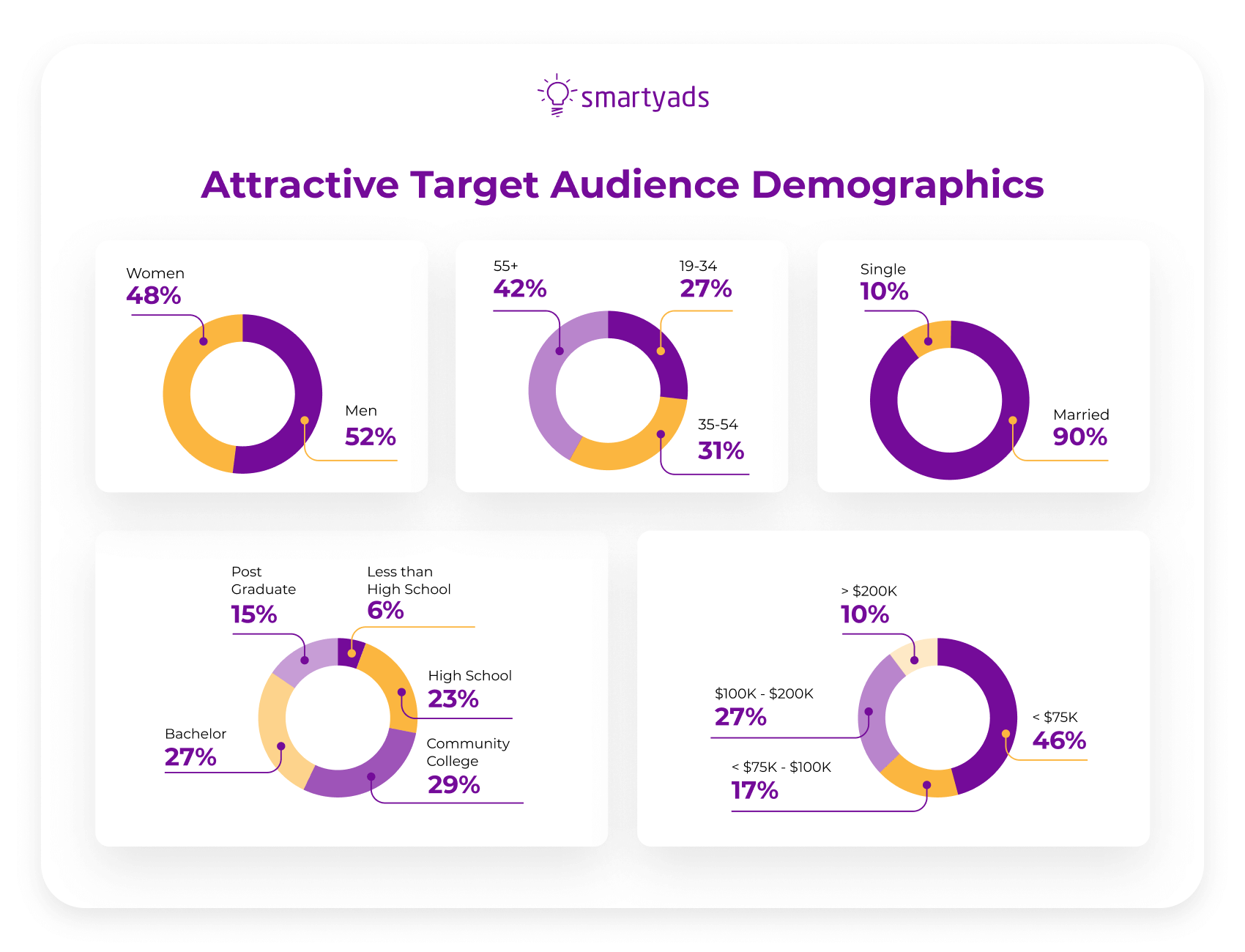 More than 20 percent of daily ad requests for CTVs are registered during primetime hours while premium content is streaming. This time includes live concerts and important sporting events, which suggests unique target audiences and potentially impressive returns for advertisers. 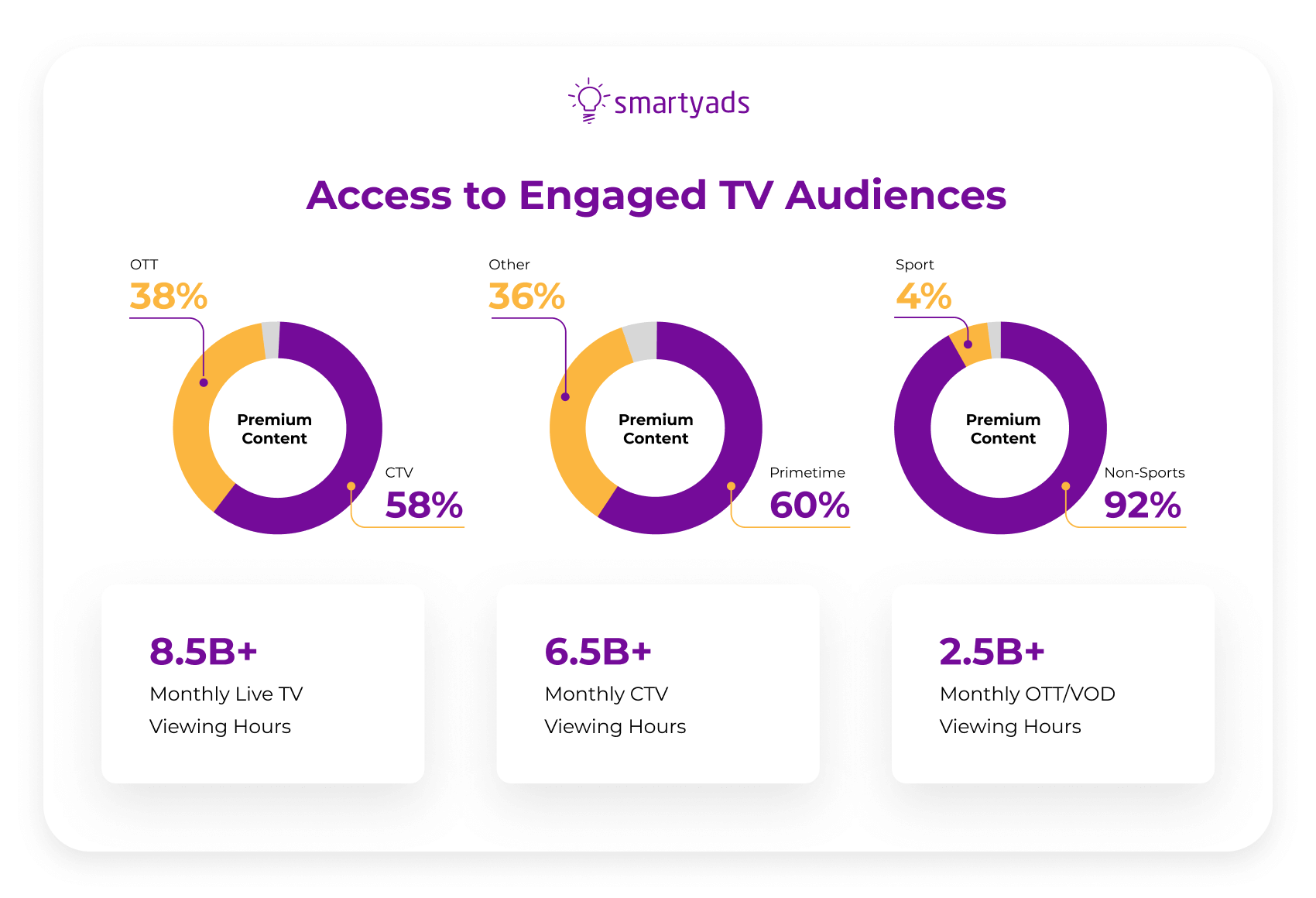 Best Internet-connected TV advertising practices will be different from those applied on the web, mostly because the medium will require good quality creatives developed in high resolution. Brands often underestimate the impact of original and memorable creative, but that is an essential visual hook that is supposed to convert viewers on big screens.

The rest of the practices for advertising on connected TV remain to be the same. They're equal to those typically applied for programmatic advertising.

An example. You sell the product for women aged 21 to 35, who have children and whose income is above average. Thus you need to set the target options accordingly in the dashboard of the CTV ad platform. After you launch a campaign, it analyzes the data received from household devices: two laptops, a tablet, and two smartphones, the system interprets that:

Thus, the algorithm understands that this household corresponds to the portrait of the perfect customer. After collecting information about the activity on individual devices, the algorithm determines that the primary content consumer in the family is a woman and delivers most of the smart television ads accordingly.

With SmartyAds advertisers receive access to premium OTT and CTV placements during primetime for various categories of content.

SmartyAds programmatic advertising platform supports all kinds of CTV ads on connected TV devices. The solution brings cord-cutting advertising experience to the viewers and outstanding opportunities to advertisers, who can tune it according to their own needs:

The Future of Digital Advertising: 6 Digital Marketing Trends for 2023
Programmatic TV Ad Buying: How TV Networks Serve Ads?
Addressable TV Advertising: Everything You Should Know About It
What is OTT Advertising and How Does it Work
Video Advertising for Publishers: The Rise of Video SSP