The number of global smartphone users in 2022 is already reaching 6.6 billion, and this number is projected to reach 7.7 billion in 2027. According to eMarketer's estimations, people use their mobile devices for about 4 hours per day, with 88% of this time spent in mobile apps.

No doubt, mobile apps are indeed top-rated — each month 100,000 new apps are released on Google Play and over 30,000 on the Apple App Store. With the rise in popularity, more and more companies are incorporating in-app traffic into their marketing strategies.

However, as data regulations popped in along with IDFA restrictions and other recently introduced privacy-related limitations, mobile marketers were forced to think of alternative ways to advertise and measure their efforts.

In-app purchases and installs are decreasing, what’s next?

Gaming app publishers spent $14.5 billion on user acquisition globally in 2021. At the beginning of 2022, according to the same stats, we’ve also seen that those privacy changes led to a 13% YoY dip for iOS. Meanwhile, Apple’s App tracking transparency framework has led to opt-in rates at 39% (significantly lower than average).

With this, the average price of in-app purchases on the App Store has increased by 40% since last year according to Techcrunch. 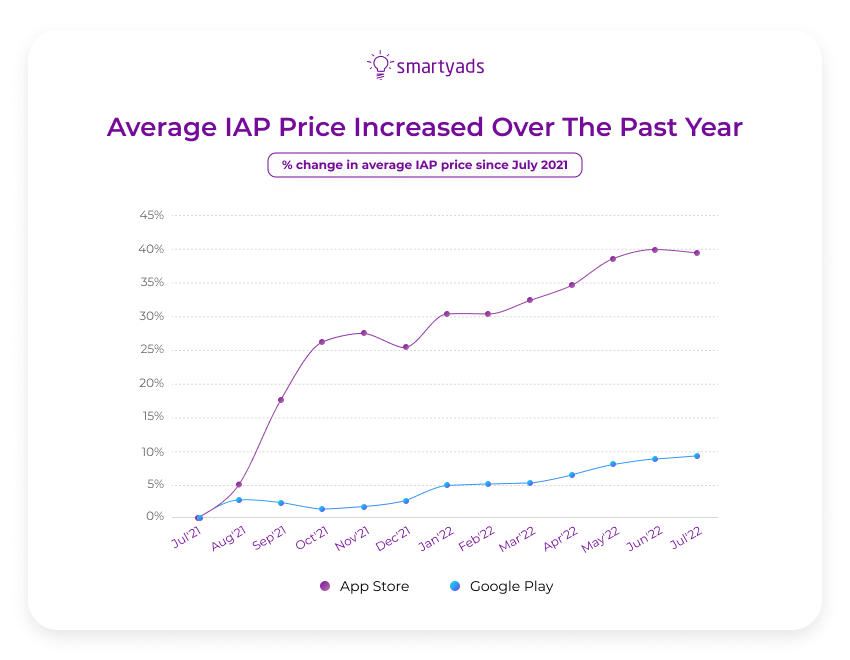 What does it mean for mobile marketers?

Tightening privacy regulations and measures in the US have become the greatest concern for the whole tech scene during the last couple of years. The experts believe that such transformations will keep evolving and that privacy measures are going to be introduced in other platforms as well. Such a picture shows us that new challenges are currently arising for app publishers, especially in the gaming sector. For this reason, they will have to readjust their app monetization efforts while focusing more on engagement and privacy.

Can in-app advertising be a solution?

Since the number of in-app purchases is decreasing and they are becoming expensive, app marketers will be looking for alternative ways to acquire new users and attract them to the apps. According to The Modern Mobile Consumer 2022: App Discovery and Monetization (insights published in Business Wire), mobile ads are still responsible for bringing 74% of users to the new mobile apps. 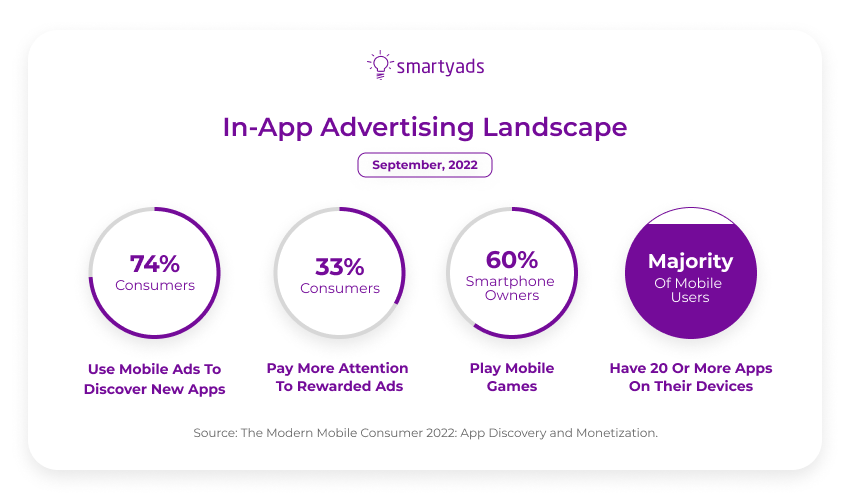 Another data source that comes from 12 months from July 2021 to June 2022, indicates that rewarded video ad format has grown on both platforms — IOS and Android, even though banner ads are still the most popular advertising formats because they have the broadest reach (with the impression share of 83% on iOS and 89% on Android).

With the CPI advertising model, app marketers received the chance to pay for ads only when their app has been successfully installed after the user has clicked on their ad. However, a CPM (cost per 1000 impressions) is still the best choice for branding campaigns, not to mention the fact that currently, the number of app installs drops.

In-app advertising is not only popular among app publishers but also among advertisers who promote their goods and services (not apps). In this case, the creative (ad commercial) is getting displayed in third-party applications.

Thanks to the targeting options available on the demand-side platform, media buyers find the right audiences among those app users. For example, place their sporting gear service offer on fitness application.

With this, advertising systems can take into account the vertical the app falls within in order to avoid individual user targeting. As user-friendly app marketing and attribution leverages are still being developed, contextual mobile advertising also rises back to prominence. Since it analyzes the topics, pages matching certain keywords, and lots of other signals, it helps to shift attention from individual data to finding the best context for ad placement.

Even though mobile traffic was obviously booming during the pandemic, privacy restrictions and regulation changes took a toll on what’s called mobile monetization. App marketers almost lost access to mobile attribution leverages they were used to, most likely, and they will have to rethink their current strategies while paying more attention to raising engagement and retaining their users in apps.

However, even now, as stats illustrate, in-app advertising remains to be a viable option for many app marketers and advertisers. The time is turbulent but the ad tech sector is actively transforming and adapting to new realms where advertising will be more transparent and privacy-friendly.

SmartyAds will continue to innovate and improve its solutions to support privacy, transparency, and efficiency for all participants of the ecosystem.

Written by
Iryna Sieliutina, Head of Content Strategy of SmartyAds
October 2022
rate this article
share with friends
Previous Article
next
Publisher’s Guide: How to Plan Your Ad Revenue in the AdTech’s Shifting Tides October 2022 Next Article
previous
What is media buying and planning and how do they work? October 2022