Although direct deals are increasingly popular, some media-buyers still confuse all programmatic deals with RTB. Those who don’t know purchasing types specifics may wrongly take direct for different programmatic deal types. In order to cease the confusion, we decided to clarify essentials and provide explanations so that advertisers could understand when to apply direct deals and how to use them effectively.

What is programmatic direct?

The programmatic direct definition states that advertisers can buy inventory at fixed prices directly from specific publishers overcoming RTB auction but with perks, it can provide: audience targeting, campaign configuration, and automation. This is also a way to get a guaranteed number of impressions on specific sites.

Thing is, with real-time bidding advertisers finally received the ability to automate media purchases and decide how much they are willing to pay per each of 1000 impressions (CPM). Smart decision-making algorithms can target the right demographics and buy ad impressions from publishers automatically, in real-time. Some brands, however, need to buy a guaranteed amount of high-quality inventory at once, so they don’t want to take part in the auction. Instead, they want to buy impressions straight from the publisher in a bulk.

High-quality publishers also want to have guarantees that their premium inventory goes to the best advertisers so they sell it in “package deals” while the rest is sold in RTB auctions.

Nevertheless, programmatic advantages are still helpful here. Here’s an example: all slots in the ‘sports news’ website category publisher sells to the advertiser who promotes sportswear. But what if the advertiser’s sportswear is only available for U.S users? That’s when an advertiser sets location targeting on a demand-side platform to the U.S and selects additional important targeting details if needed (OS, device type, time of the day, IP, etc), as well as budget and other configurations. That’s how all programmatic auctions can be differentiated: 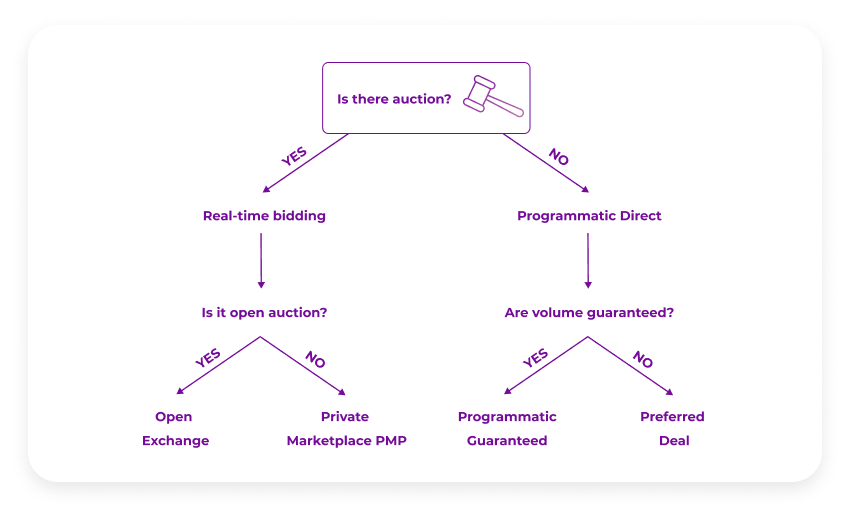 Apparently, programmatic direct was created as a mechanism that lets both publishers and advertisers regain some control over impression volumes and confidence considering where ads will be located. However, there are three more types defined within direct deals, each has its own subtleties. 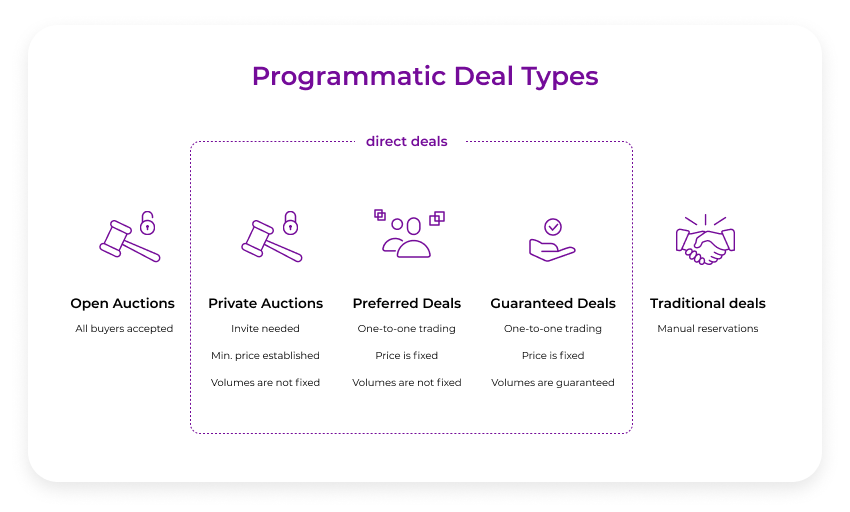 Initially, launched by DoubleClick, Preferred Deal is also called Deal ID. Preferred Deal is a direct agreement between the buyer and seller when the CPM price is fixed, but the volume of impressions is not. In fact, with this type apart from price, no one has obligations and guarantees. Preferred Deal gives advertisers priority and exclusive access to inventory, if it fits, they complete a transaction without auctioning.

With this model, impression volumes and CPMs are fixed. Usually, the SSP is connected via API to the website’s ad server and DSP gets the opportunity to create orders in case they're approved by the sell-side. Thus, media-trading occurs one-to-one.

Which deal type should advertisers choose and when?

As seen from above, programmatic direct types can combine effectiveness and scale of programmatic purchases with advantages of traditional sales (direct contact of buyers and sellers, trading premium inventory and, guarantees regarding impression volumes).

These types of media purchasing are chosen by advertisers that want to focus on inventory quality, the security of their brand, and premium slots that they can choose themselves. Only through direct purchases advertisers get desired advertising placements which they oftentimes can’t find at open auctions. Today tapping into such opportunities becomes easier with SmartyAds DSP.

How to buy programmatic advertising direct on SmartyAds DSP?

The demand-side platform lets you search for the publishers by geos, ad formats, business vertical and other buying parameters, participate in real-time bidding open auctions, private marketplace auctions, and preferred deals to trade with certain publishers (each of such deal will be assigned a unique hash id). In a single dashboard, you will be able to manage all your campaigns and deal types. You can get started with a programmatic direct in three simple steps. In order to discover top-notch inventory offered by premium publishers:

2) Go to the ‘deals’ section. It will enable buying placements from specific publishers directly using RTB mechanisms. In case you’ve made direct deals with publishers, specify them in the ‘inventory’ section.*

*For instance, the publisher has made a deal to sell 1000 impressions at a particular ad slot. The publisher generates and transfers the unique ID of the deal to the advertiser. The advertiser specifies the deal ID in the campaign. During the campaign flow, the system will buy such placements with higher priority than all other open market placements.

To do so, just enter the deal ID, configure essential Bid Price and save the campaign. The impressions from that particular publisher will be automatically purchased in priority order.

What is Programmatic Advertising?
RTB Programmatic: Media Buying and Real-Time Bidding
What is a DSP (Demand-Side Platform)?