Banner ads have been there since the dawn of digital marketing. Even though new display ads keep coming to the scene, banner advertising has never ceased to evolutionize. With interstitial, mobile, video, and rich media web banner ads marketers achieve efficiency, aptly avoid banner blindness, and enhance retargeting effectiveness.

What is a banner marketing advertising?

A banner marketing, also known as display advertising, refers to the strategy that uses banner ad placements on websites as the key strategy for traffic monetization. First things first, let’s find out what it is and how it looks like.

What is a banner ad?

The banner ad is a graphic element stretched across the web page in the static (.jpg, .png, .gif) or interactive form (Flash, in-banner video) with the aim to promote advertiser’s brand.

When users click on ad banner located at the hosted website, the unit automatically redirects them to the advertiser’s website where they can buy a specific product, fill the form, leave an email address, or commit another target action.

The primary task of the ad banner on the landing page is to inform potential consumers about the product advertiser wants to sell or to promote the brand as a whole.

As well, it is important for the website banner ad to feature a memorable visual creative in order to stand out among similar web banner ads, engage the visitors, elicit clicks and conversions.

The anatomy of banner ads

Digital banner ads come in different formats and sizes which, as a rule, are suited to the platform they are served at - mobile or desktop. Many advertisers fall into the misconception that standard banner ad should have large resolutions to be noticed.

Buying banner ads, many advertisers consider exceptionally top placements on the web page. This approach is not mandatory, especially when the website’s content is good enough. On such websites, the user is more likely to scroll the page to the article’s end, so the banner advertisements at the bottom get more clickable.

The smaller brands will generally have to stuff banners with more text, calls to action, and “buy” buttons to convey the message and describe what they have to offer to the customer.

The most widespread and highly performing banner ad sizes according to the Adsense (and their most frequent locations):

IAB standards feature all sizes and formats for the display banner ads, the most popular of them are:

Currently, website banner ads in combination with video, sponsorships ads, and rich media qualify for the biggest 50% of online advertising spend share, the worth of which is estimated at $34.billion.

Expectedly enough, the US spends the most on online banners ads and obtains the greatest $20,039.5m revenue as a result. China occupies 57.1% of mobile banner ad share. The overall revenue retrieved from internet banner ads in China reaches $8,016.5 m.

The European internet banner market is only growing but is expected to achieve 12.0% CAGR by 2021. 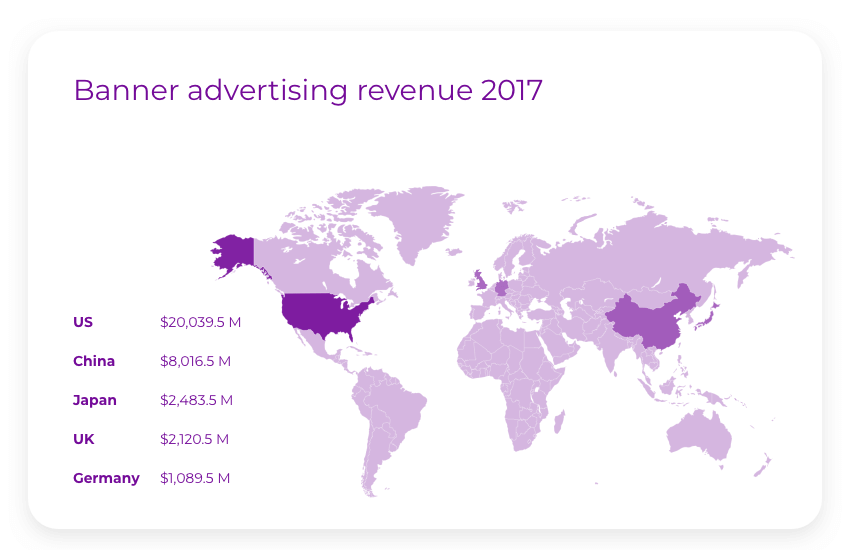 Online banner ad marketing is perceived as a traditional convenient way to generate the traffic among advertisers as banner formats are universally supported and served on any ad platform.

The downside of such compatibility is the banner blindness and banner fatigue that causes the standard banner ads to go unnoticed by the users while they browse the landing page.

The average CTR of the banner ad depends on size, type, creative, and platform they’re served at. Thus, CTRs of interstitial banners balances between 1.01%- 1.96% - while for an expandable banner this number varies from 2.90% to 3.78%.

The experts point out, advertisement banners show much better CTRs and viewability when their message is concise and catchy. Technically, ad banners perform greater when served through programmatic and on the mobile, where they avoid the ad blockers. Read about things you need to know about programmatic buying.

Banner advertising is too often hindered by mediocre creative. Taking care of banner design is the first step advertiser should make towards successful offer delivery. Designing banner ads, an advertiser can make use of following practices that will guarantee the banner ads are also converting post-view.

How to plan a banner advertising campaign?

Banner ads help such brands like Apple, IBM, and Google grow their brands and improve product awareness. Smaller brands prefer web advertisement banners for their affordability and the fact that they can be served cross-device, literally reaching every audience segment.

Websites with banner ads can show great effectiveness during the retargeting process. In case users didn’t click on the banner during the first visit, these display ads can target them again on different resources programmatically.

In order to make the web banner advertising work, it is essential to define the purpose of the ad campaign according to which you can plan the next steps:

During the media plan creation, it is important to think not only about traffic platforms but also about the other ad placements on the site that your ad banner will have to compete with for user attention.

Upon gathering the list of websites suitable for the ad banner placement, you can sift it through, selecting only the best ones that bring the biggest amount of traffic. One of the key points to consider is quality and relevance of traffic that is able to convert visitors into customers.

As a rule, the roots of the low digital banner advertising performance are traced back to the wrong banner placement estimation.

Oftentimes, standard banner ads are placed on websites only according to the subject without taking into account the demographics, their buying capacities, and personal preferences.

The programmatic approach helps to resolve these problems that stem from manual placements. For instance, SmartyAds DSP enables advertisers to pre-select who should be viewing a particular banner ad according to the browser, geolocation, OS, platform, and other indicators.

As well, it is possible to select the ad banner view frequency and manage how many times the banner will be shown to the particular user in order to avoid banner fatigue.

For the advertiser, registering at DSP means getting instant access to the largest variety of inventory represented on the ad networks and SSPs and making the most advantageous deals automatically through real-time-bidding protocol or different programmatic mechanisms.

Registering at SSP is equally beneficial for the publisher. This way they reach endless demand options and configure how the size, format, and placement of the future ad banner.

Raising the effectiveness of your banner advertising campaign means testing several banner creatives, banner sizes, and formats, as it is necessary to show different types of banners to different audience segments.

SmartyAds DSP platform allows to run several banner ad campaigns simultaneously, apply retargeting and determine the most beneficial resolutions based on the statistics.

The aggregated statistics will provide the advertiser with the valuable insights considering the campaign effectiveness, the most productive time when banner ads are most viewable by the users and shed the light on how to optimize existing campaigns.