Your campaign can be a part of the most effective programmatic ads strategy with the best creatives and targeting features, but all this will have no real value if your ads aren’t viewed. There can be many reasons why an ad doesn’t get exposure, so it is important for marketers to make sure that all their purchased impressions get desired attention. To understand how many of their ads are actually seen by real users, ad viewability measurement was introduced. In this blog post, we are going to explore what is viewability and how this metric can help advertisers.

What is ad viewability?

Advertising viewability is a metric of digital advertising used by marketers to measure how many of their ads get real exposure to users. Such numbers can give advertisers a clear picture of their viewable ads and, therefore, help to understand how much real value their campaign will add to their overall strategy.

Why should you care about viewability advertising?

In 2013, an in-depth analysis of thousands of ad campaigns from comScore revealed that 54% of all display advertising impressions have never been seen by users. The next year, this information was confirmed by Google - 56.1% of display impressions from DoubleClick and other Google’s ad platforms are not viewable. The news shook the industry, so both publishers and advertisers started to raise awareness around viewability metrics. Thanks to this, the situation changed for better - in 2019 global viewability averages surpassed 60%, according to the IAS report. Yet, this still means that almost 40% of your ads aren’t even seen by an actual human, so there still a way to go:

With all that in mind, let us now dive deeper into the details of how to measure ad viewability.

What is a viewable impression?

Now that we got a viewability definition, it is time to explore what are viewable impressions. To get a precise vision of digital advertising viewability let’s check current industry standards:

What is mobile ad viewability?

This all can work well for display ads, but how to measure ad viewability when it comes to mobile formats? According to the Media Rating Council (MRC) viewability guidelines, in order to count as viewable a mobile ad impression should meet the following criteria:

How to measure ad viewability?

Now that we discussed viewability and why it is so important for advertisers it is time to turn to practice and explore how to measure ad viewability.

Total viewable ad impressions: the number of ads that were successfully delivered, with at least 50% pixels loaded and which stayed in a user’s view for a minimum of 1 second or longer (2 seconds for video ads).

Total served ad impressions: the number of ads that were successfully delivered on the web page by an ad server. Example: you get 300,000 overall served impressions with only 250,000 being viewed. In this case, your viewability rate will be 83.33%. It implies that the remaining 50,000 (16.67%) of impressions you’ve paid for never entered a user’s viewable area. So, the higher the ad visibility rate is, the better.

How does ad viewability work?

To measure digital ad viewability a special feature should be embedded in the ad creative. Usually, a javascript tag is attached to the ad and it is then activated once an ad is loaded in front of the user. This tag is in essence an advertising viewability tracker that launches automatically in the user’s browser.

Such a tracker gathers various information about the interaction and the environment. This data can include browser window dimension, ad positioning on the page, view time, the scroll position at the time an ad was served, and other parameters. It is then reported and sent back to the database at the server-side.

What are the main causes of poor ad viewability?

There are many reasons why so many of the ads aren’t viewable. Some are rooted within the website design and ad placement, while others are more related to user behavior and technologies (i.e. connection type and speed, device, screen size, etc). Some of the most common scenarios for low-viewability ads campaign include:

As we can see, there are many cases when ad impressions appear invisible for the human eye, still, they are counted as served. They don’t only damage advertising revenues but result in distorted statistics which, in turn, could lead to incorrect decisions and strategies. Some of these reasons behind low ad viewability are hard to control, so perhaps a 100% viewability rate might not be the most realistic goal. There are, however, things we can impact in order to improve the situation - let us discuss these in detail.

How to increase ad viewability?

The reasons behind low digital ad viewability present a range of complex issues, most of which can be fixed only by a joint effort from both supply and demand sides. Here are some of the most common solutions that advertisers can turn to in the search for increased ad viewability:

1. Reduce ad latency.Slow page loading is an important factor as every extra loading second increases the probability that the user leaves. To reduce this time, first of all, publishers should check and optimize their sites (here you can find some tips from the IAB).

Advertisers, in turn, should consider the parameters of their creatives - remember, that the weight of an ad can significantly impact its loading time even if the webpage it appears on is perfectly optimized.

2. Consider the size and location of the ads. When it comes to ad location, a good practice for publishers is to inspect and reiterate their site design to find their ‘hot spots’ with the highest ad viewability rates. Above-the-fold ads are generally known to perform better than below-the-fold, but for the best results, it is essential to examine your specific website features and user behavior.

For advertisers, it is more important to consider ad sizes. When an ad is placed right above the fold, horizontal ads might work particularly well. Vertical ads, however, have higher viewability rates in general, especially if they are placed along with some relevant content. When creative’s size and location are optimized with consideration to viewability, advertising campaigns perform much better without additional effort. 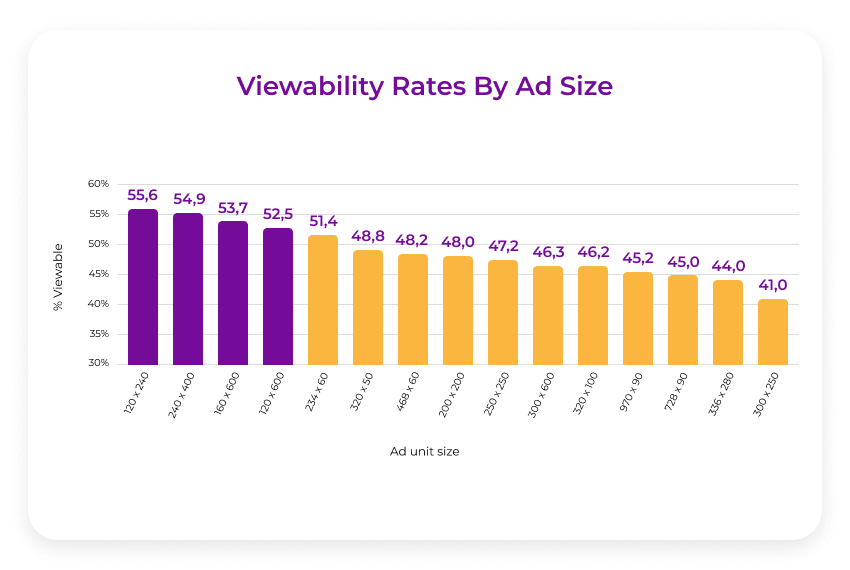 3. Pay attention to ad fraud. Fraudsters can pose a significant threat to your viewability and ad budget, especially when it comes to ads with higher CPM. It is unlikely that the problem will be completely solved, but you can still reduce risks by taking simple precautions.

Make sure that you work with trusted vendors who provide viewability metrics and ensure system transparency and measurements. It is also important to review your campaign performance often and gather insights regarding the traffic and interactions with your ads. This information can be then used to adjust your campaigns timely and efficiently. A good DSP will usually provide you with both ad fraud detection tools and detailed reporting features.

At SmartyAds, we believe that our partners deserve the best quality of impressions, which is why we do inventory fraud detecting and preventing. Thus, we charge advertisers for viewable impressions only. Our platforms have the latest ad fraud detection solutions inbuilt. This way we ensure sophisticated digital ad viewability coverage that corresponds to the top industry standards. These tools detect all kinds of suspicious activities, including bot traffic, domain spoofing, ad stacking, and pixel stuffing. At the end of the day, you get a real picture of your campaign performance and fake impressions don’t count.

SmartyAds viewability metrics allow our clients to get insights regarding user engagement with different types of ads, viewership data, as well as identification of real human views. This way advertisers can discover which ad placements and audiences provide the most value to their business.

Launch the most viewable campaigns with SmartyAds DSP!