The world of digital advertising develops at an enormous speed. Throughout recent years, programmatic advertising has been leading the way. Emarketer reports that the percentage of programmatic among total digital display ad spending has risen from 73% to 84.8% throughout 2016-2019. Moreover, in 2020 it is expected to reach 86.2% which translates into $65.6 billion. Not only the industry grows in terms of size, but also in terms of the diversity of solutions. 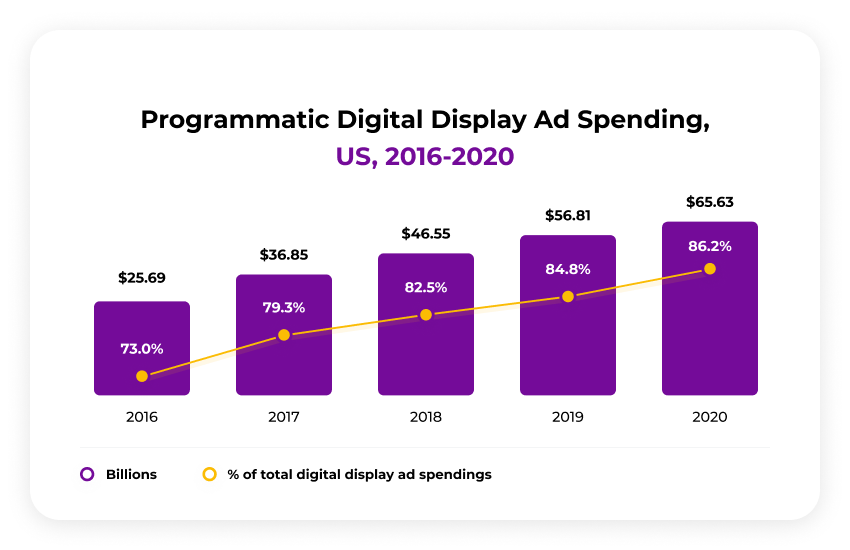 As new concepts and technologies are being introduced, it is sometimes not so easy to keep up with everything, especially when the methods are pretty much similar to each other. Programmatic network and Google Display Network are good examples of such, so to avoid confusion, let us now compare the two and check, in which cases one performs better than the other.

What is the Google Display Network?

Display advertising has been introduced in the 90s, back then it mostly included various kinds of banners shown to users through display ad networks. There are many different display networks, such as Conversant, Yahoo, Bing and Google, which account for more than 2 million websites. As such, Google Display Network works as a networks of publishers and connected supply partners within a closed Google Ads system and serves as a mediator between the advertiser and a network of publishers connected to Google. It provides advertisers with an interface for basic targeting, ad scheduling, and other options in order to reach their audience within Google network. It is also integrated with other Google platforms, such as Google Analytics. 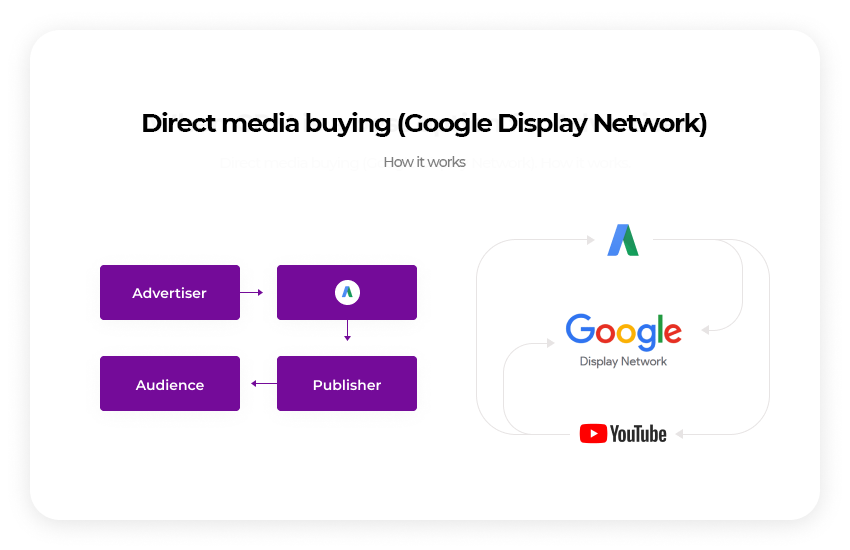 What is programmatic ad network?

Programmatic advertising network gathers advertisers and publishers from all around the world. It allows advertisers to buy ad placements and inventories under the best conditions, usually matched by RTB. There are several things you need to know about programmatic buying. The process of programmatic advertising also takes place on special platforms - ad exchanges. They work similarly but still, ad exchanges are slightly different from ad networks. Programmatic networks and ad exchanges connect advertisers (DSPs) and publishers (SSPs) together and conduct real-time auctions. Everything works according to the following algorithm:

Advertisers sign up to the demand-side platform (DSP), and place their ad campaign, specifying properties of the ad, such as size, format, etc. Next, they choose their target audience, as well as the conditions under which they want this audience to receive an ad. From the other side, a publisher gets to the SSP, a supply-side platform, and provides their available ad placement with an indication of what ad formats and size they support.

Once a user visits their website (which contains an ad placement), the bidding process starts (real-time bidding) among advertisers whose ad conditions match the provided inventory. The one who offers the highest bid wins. A user sees the winner's ad and all of this within a time of less than a second.

If it is a white label ad network, the platform owners integrate DSP and SSP partners of their own choice, as well as data-intelligence platforms like DMP and other supportive programmatic tools. Such a model gives network platform owners an additional layer of transparency and control over internal processes. Here’s how it looks like. 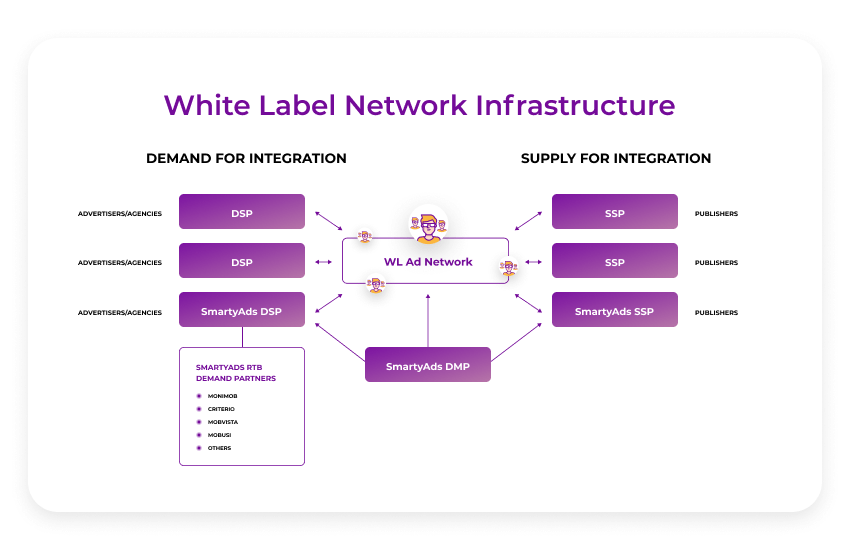 What should I choose to get a wider reach?

It is much easier to understand the difference between programmatic vs Google Display Network when we compare them within certain functional, so let's start with the audience reach. The audience of Google Display Network includes all of their partner websites, which have signed up to their network. Although this number is really huge, it is still limited, in contrast to what programmatic advertising has to offer.

The ad exchange gives advertisers access to many SSPs, Google Network included, so ads can be served to more people than any display network Ñan cover. Therefore, if you want to reach a broader audience, you should definitely opt for the programmatic network rather than the Google display network.

When it comes to targeting, there are many different options to compare Google Display Network vs programmatic advertising platforms. You can target users by mentioned keywords, related topics, users' interests, and demography. However, the data used by these platforms can vary significantly.

The Google Display Network has Google search data at its disposal, while programmatic advertising allows you to make use of third-party data. This provides huge opportunities to target users by lots of very specific characteristics and to segment an audience more effectively. Given that the volume of in-depth data available through third parties is much bigger, programmatic advertising clearly wins this round, as it does not limit advertisers to one source of informationÑ Thus, it gives more options in both targeting and audience segmentation.

Where can I get a huge variety of ad formats?

Most of the ad formats are covered by both Google Display Network and programmatic network. Google Display Network supports banners ads, video, as well as rich-media ads. One downside, however, is the fact that lots of publishers who are partners of Google do not support rich media for their placements. This can be a problem for advertisers who would like to interact with users and get more engagement using this ad format.

Programmatic platforms also allow advertisers to work with native advertising, which is especially effective against banner blindness. Apart from this, native ads are well-known for good user engagement and raising brand awareness. So, if you are interested in best-performing mobile ad formats, such as rich media and native advertising, programmatic platforms will probably suit your campaign better.

In contrast to other features, the online ad pricing models used by programmatic ad networks and Google Display Network differ significantly. Google Display Network offers the following options: CPC, where cost is counted for each click; CPM, which is calculated for every thousand impressions; and CPA, which is decided based on a specific action, such as sharing an email or playing a mini-game.

Programmatic advertising, on the other hand, is usually calculated using CPM or cost-per-mille formula. According to this model, to get the price, one should count total impressions, divide it by 1000 and then divide ad spend by this number. This might be somewhat limiting for those who would like to try different pricing models, but for most of the marketing purposes, CPM is the best and the most affordable option.

What about the cost?

In terms of cost efficiency, the choice of platform should depend on the amount of money which you expect to spend. Google Display Network does not require minimum payment which works well for beginners. Networks, on the other hand, are generally more oriented on a monthly payment for campaign maintenance, usually something around $5000 to $10000. Hence, if you want just to start from small prices in order to test how the whole process works, then Google Display Network would suit you well, at least until you decide to bigger campaigns and spend more money on them.

At the same time, programmatic advertising has one significant advantage, which is the automation of bidding and the ability to buy ads instantly. The process becomes much more productive as most of the manual work is done by machines in a brief moment. Programmatic removes the possibility of human error in the process and enables best practices of bidding on a huge scale for both sides of the auction in mere seconds.

What should I use for video advertising?

If you want to work with specific websites and not just limit yourself to YouTube videos, programmatic advertising will probably work better for you. This might be especially useful for targeting a niche audience focused on a specific topic or product. The choice between programmatic advertising vs google display network is easy to make once you know exactly who you want to reach.

To sum up, we can see that the Google Display Network works well as a place to try digital display advertising, as it provides opportunities to try different pricing models and doesn’t require huge ad spending. For a larger scale ad campaign, however, programmatic ad network seems to work better, because it includes a great number of additional options for a successful campaign operation.

With our new DSP, you get all these benefits for your advertising campaign. Don’t limit your opportunities - sign up at SmartyAds DSP!