Online programmatic advertising is bravely marching onto traditional TV scene. Who could have guessed that’s gonna be a reality for advertising industry a couple of years ago? Apparently, ESPN could, at the beginning of 2015 the channel officially started broadcasting the advertisements to TV audience using the real-time auction instead of sticking to the familiar but slow direct TV ad buying methods over email or phone.

Programmatic TV ads have a great future because television has not died, it evolutionized. Every year the users consume large amounts of video content, the thing that really changed is that TV audience is watching their favorite shows anytime and everywhere they want on their favorite devices.

Programmatic TV advertising will trigger the massive changes on the market of TV advertising as participants will have to completely reinvent the approach to the price formation and ad placement, let’s see how exactly upcoming changes will modify TV ad buying in the nearest future and what benefits programmatic advertising TV holds up its sleeve.

What is programmatic TV advertising?

Connected TV is enabled by the Internet, users connect to it using consoles, streaming boxes, devices or Smart TV. Unlike in linear TV connected makes it possible to measure the ad completion and delivery and serve various ads depending on a household. What connected TV is you can find here - How Connected TV Advertising is transforming TV Industry

Providers of addressable TV serve different ads to the different households while broadcasting the same shows to the various audiences. Technically, this TV is a container for the programmatic television advertising.

Real-time targeting is what sets the distinctive line between these two kinds. Programmatic TV companies deliver data-driven software that facilitates the process of ad buying, planning, optimizing, and ad serving. Such planning gives the insights considering TV networks, shows and timing that makes a TV addressable so there’s no need to target by household. Programmatic TV is contextual while addressable TV collaborates with cable networks or TV distributors to get access to certain households. 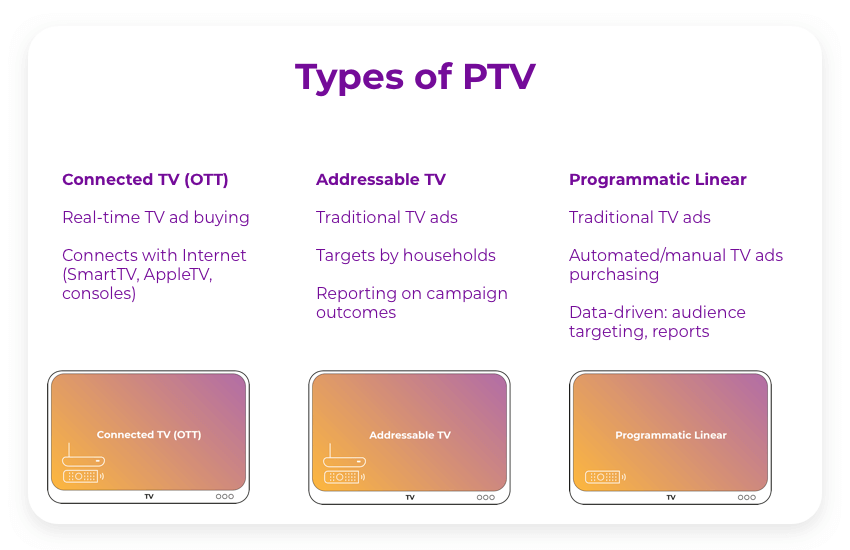 Advertising on programmatic TV: how it works

The core of the automated ad placement system inside programmatic TV is a programmatic technology that enables any TV buy inside one unifying platform for all channels.

The data-driven technology of the programmatic TV buying allows advertisers to bid on the TV impressions real-time and let the higher bid define whose ad will be shown while broadcasting takes place. The information about users including their lifestyle, personal preferences, financial situation or any other indicator used in programmatic ad targeting will be available for tuning in the system

With programmatic TV advertising, there will be absolutely no need in manual program selection sifting through possibly appropriate shows, programmatic ad will be served once TV audience matching the targeting options watches the TV.

Here’s how programmatic TV advertising looks on SmartTVscreens: a small personalized ad unit pops up on the TV screen or at the sidebar, the user is free to click on it or leave it as it is until it disappears. 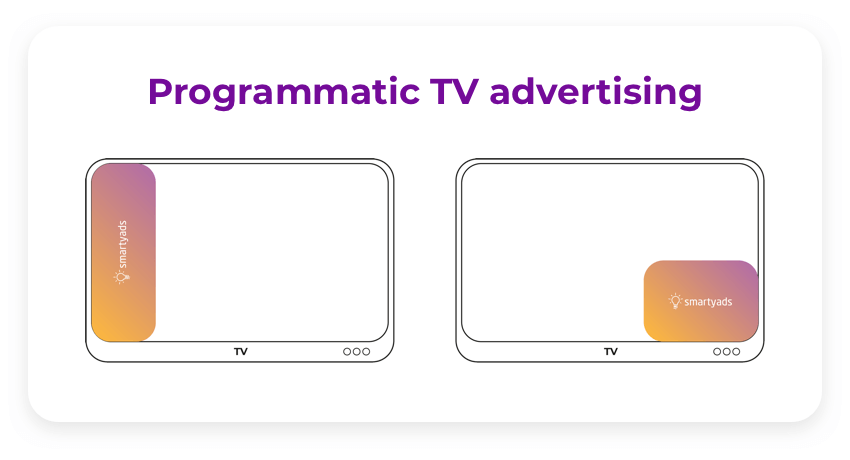 Programmatic television buying is not excessively popular among advertisers yet. According to BI Intelligence Report, in US programmatic TV buying in 2016 reached $1 billion that takes only 1% of $73 billion of all conventional television advertising ad buying. The global reach, however, has climbed up to almost $180 billion a year in 2017.

The early adopters of programmatic TV ad buying can take a full advantage of the situation and penetrate an uncharted TV audience market with minimum efforts brought into competition and achieve better results with advantages that ads on programmatic TV have to offer:

Audience-based targeting as the first and foremost. Through the programmatic TV buying platform the advertisers can access selected demographics and serve the ad messages with a more precise, narrow focus.

Before programmatic TV, ads were bought manually, this involved a lot time spent on negotiations and caused ad budget wastings due to the wrongly picked timing, show or channel.

Small blocks that belong to the premium inventory are among those items that frequently end up unsold. Programmatic TV advertising is not only able to save the day but also helps to achieve higher CPM according to think with google reports.

The ratings of the TV shows continue to drop every year as well as overall TV revenues that failed to reach the worst-case scenario rate last year. Such situation is what pushed publishers and advertisers turn to a cross-platform programmatic TV.

The former manual process of buying and selling inventory didn’t provide an analysis for the advertisers whether their ad budgets were spent effectively. Programmatic TV platforms have essential functionality in-build for media planning, statistics, and analytics.

Why is programmatic TV a future?

Ineffective ad spending is the greatest fear of every advertiser or media owner who is standing on the threshold of trying the new technology. Nevertheless, in the nearest future reaching young TV audience without programmatic TV advertising will be borderline impossible because generations consume television differently.

Traditional TV is rapidly losing ratings every year so whoever you will be trying to reach using conventional ad placement methods will be drifting further away from reach. More and more people are getting accustomed to their favorite media channels and technology for content streaming with no indication of this trend changing in the future.

This fundamental change is the reason why advertising on programmatic TV platform appears to be a single gateway to formerly unavailable TV audiences or audiences that will completely vanish from traditional TV medium tomorrow.

So far, every publisher can monetize their ad inventory programmatically via our SSP and advertisers can set their individual deep criterias for the audience targeting getting better revenues from SmartyAds DSP.

Striving to become an early adopter of programmatic TV buying? Contact us and find out how we can help!