In a digital landscape with more advertising options (and, therefore, confusion) than ever, an increasing number of brands are turning to in-house programmatic buying to enhance their operations. In this article, we’re taking a look at what’s in it for brands that drive the world’s largest businesses to adopt this method, and what kind of company such shift could be right for.

Programmatic ad buying refers to digital ad buys made by an AI algorithm. A state-of-the-art ad-buying algorithm will match ads to ad publishers and decide the best price per impression in real-time, at any scale.

Usage of the latest technology can empower companies to cater to their own ad purchasing needs without purchasing the services of an external agency. In-house programmatic is no longer a costly decision since today it scales up to the needs, budgets, and objectives of a given company – small, big or medium-sized.

Taking programmatic in-house, as a business-running approach, exploded in popularity in recent years due to being a much more reliable and cost-effective way of making sure advertisements appear before the right eyes.

The main reason behind the trend, however, is better control over all internal processes, user data, and reduced costs that are otherwise distributed among intermediaries: tech providers, traffic arbitrators, and network participants.

According to the industry experts, in-house programmatic is growing into a big trend. The Association of National Advertisers (ANA), an organization of marketers and advertisers that has on the team some of the largest ad spenders in the world, reports an annual income growth in companies that are bringing programmatic in-house from 14% to 35%.

A later report by the Interactive Advertising Bureau (IAB) shows that 18% of brands have fully moved their automatic ad buys in-house and 47% have done so at least partially.

Those brands that adopt in-house solutions normally witness the ROI growth by 30-50%. The app developers that strive to increase the installation rate manage to reduce the cost per installation from $3 to $1 in several months.

ANA's survey showed the following to be the top reasons to convert to programmatic:

The respondents to ANA's survey are 149 client-side marketers, over half of whom work with companies whose ad budgets exceed $100 million. IAB's report includes responses from 119 brand representatives, described as “media decision-makers across all titles and 16 major ad categories.” 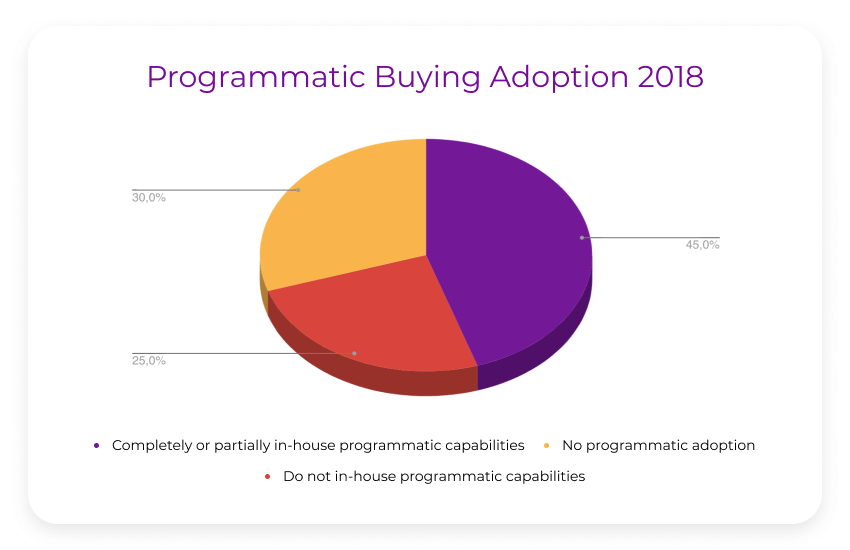 This latest shift compliments ANA's earlier finding that brands are switching from agencies to in-house staff to fulfill their marketing and advertising needs.

Greater control over ad purchases means greater transparency in how budgets are spent, faster feedback, this gives brands the ability to take different course quickly if needed. Compare that to continuous relying on the services of a black box where the money goes in and KPI metrics don’t always come out.

Cost-effectiveness. Another major factor in this recent shift is the same reason agencies started automating in the first place: cost-effectiveness. As brands start relying more on their in-house operations for marketing, automation is a natural optimization process that follows. Hiring someone to control a robot that buys ads around the clock frees up the time of the three people who used to do that job.

Revenue growth through optimizing. As some marketing budgets bloat while being worn down by bots, the latest move by the largest ad buyers out there is to cut down on their budgets. Programmatic ad buying allows marketing teams to cut down on the number of fake impressions and increase the likelihood of an ad being seen by a real person. This creates an opportunity to eliminate wasteful spend while retaining the visibility of their campaigns.

The savings of moving programmatic in-house are difficult to estimate without a deep case study, but as IAB’s 2016 report points out, up to 50% of an ad budget can be spent before it ever reaches the point of an ad purchase.

User data. Lastly, with in-house media buying the brand accesses one of the most valuable things in digital advertising: the user data. Without outsourcing their ad-buying activities, these companies get to collect and dissect their target audience's preferences in a way that they couldn't before. This offers the chance to gather, store, and process consensually obtained user data. Furthermore, this lowers the possibility of data loss or breach as the data will not be regularly transferred to third parties.

Is programmatic in-housing right for you?

Before your brand decides to start in-housing programmatic, it is important to evaluate your assets, budget, time resources, and most importantly, understand what problems this decision can solve in your business.

The first thing that business owners should consider is their team and their capabilities to run a new ad-buying system. At least one new hire will have to be made and it's possible that further investments into the competences of the current staff will be necessary.

Per ANA's report, "most respondents have one full-time staff member who devotes 100% of their time to programmatic initiatives, with a range of zero to 15 full-time employees." The report also notes that a median of three employees per company are involved in programmatic as part of their duties in addition to the full-timer mentioned above.

Can you bet on the long term?

The other important factor to consider is time. Making new hires and setting up a new system can take at least 12 months, IAB noted in their report. A staff shakeup can also impact operations and take the focus off priorities.

There’s no doubt that making the move to programmatic ad buying in-house will pay for itself in the future, but think about whether your company and team can handle the strain.

The benefits of an in-house approach for your brand are quite clear, but so far most of the success stories in this niche have been coming from industry giants like Unilever, Sprint, and Netflix. These aren’t players who need to be thrifty when making staffing decisions, and they placed their bets on programmatic advertising in-house when the path was not as well-trodden and there was no affordable solution available.

This, in turn, pushed the available tech to democratize. Today, new solutions like SmartyAds empower small and medium-sized businesses to take charge of their media buying processes. Our programmatic solutions are tailored to the marketing needs of each individual business and to date, we’ve been able to help dozens of businesses increase their yields and reduce redundant marketing efforts.

Find out how to launch your own omnichannel programmatic solution in-house.

Written by
Iryna Sieliutina, Head of Content Strategy of SmartyAds
December 2018
rate this article
share with friends
Previous Article
next
What is a Customer Data Platform and Why Should You Use It December 2018 Next Article
previous
DSP vs. Ad Network. What is Better for Media Buying? December 2018