Today, programmatic buying plays a crucial role in digital advertising and allows online marketers to automize media planning, and makes ad space purchasing more efficient. Let us dive deeper into some insights that change the landscape of programmatic media buying. With many wondering what’s going be the next big thing, we will crunch some numbers to justify the rise of programmatic media purchasing all around the globe.

On the chart, you can see the trend: the ad spending curve is going up. It predicts a significant rise in programmatic purchases in developed markets. 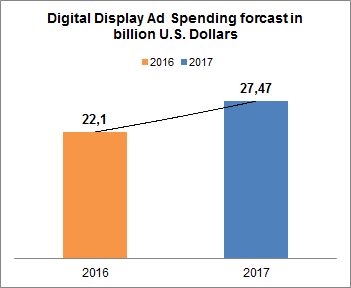 In 2017, the spending on programmatic ads will grow by 24% reaching almost 27.5 billion dollars among US-based companies. While the United States media buying accounts for half of world’s industry, some of the advanced European economies significantly contribute to the flourishing global popularity of algorithm-driven ad purchasing. 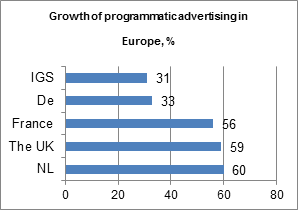 Among EU countries, the ones with the largest expected annual growth of the market segment in 2016-2017 are the UK, France, and the Netherlands. The majority of ads in these countries are purchased and sold programmatically. Programmatic spend in mentioned countries will increase in 2017 by more than 50%. Going East, APAC’s giant - China is likely to add up half of what it spends in 2016 to its programmatic buying capacity in FY2017: 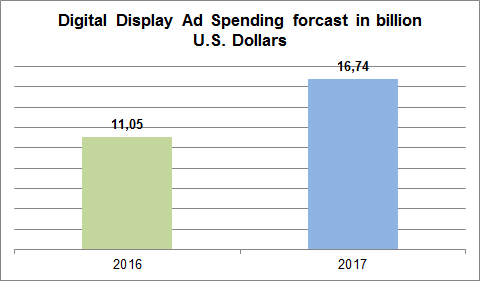 What will impact the digital industry in the short run?

Further, we will explore some factors that contribute to programmatic industry growth in the upcoming future. Let us disclose the principles that will add up to the new look of programmatic advertising trends.

Since the ad supply chain is becoming more complex, some of the market players are likely to shift their attention to intermediaries. Growing demand to have more control over data makes brands think of internal units that manage programmatic marketing. To what extent it will be done, depends on a particular business need of a client: some will decide to collaborate with just one single demand-side platform partner, the other ones will assemble a standalone team that will manage in-house programmatic media buying.

Since the transparency of inventory sources is very important for unbiased media-trading, an open real-time auction can be substituted by programmatic premium deals at the private marketplaces. Although programmatic marketing is at the peak of its popularity and keeps on progressing each year, many are not ready to lay their hopes on inventory quality coming to them automatically based on deep machine learning. Although ML and AI algorithms are precise, it is not possible to know exactly where your ad is gonna appear.

Artificial intelligence is already a focus of media trading. However, it appears it’s not enough. With customers and their ever-changing buying habits it becomes essential for media planning to predict them in order to find out what impressions they are likely to react to. A highly-flexible algorithmic environment that will use a powerful API to adjust the ads depending on buyers’ mood swings defines the future. Tech companies will offer their own algorithms to those interested in effective media buying so that the other companies could analyze influential factors at a particular moment before the ad is served.

People use their phones several times a day for various reasons, so mobile programmatic ad serving will bring almost 40% more in revenues to ad tech companies in the US during the upcoming 2017. Viewing ads from smartphones will skyrocket mobile ad costs, contributing to overall programmatic expansion. Thus, it is not an innovation but a trend to watch and catch up on according to BI Intelligence. Additionally, galloping mobile ad advertising is growing more rapidly than any other ad platform. Mobile internet spending worldwide bulks up by 30 billion US dollars on average each year starting from 2017 till 2019. Very soon programmatic will also evolve to the point when it is able to offer better targeting options, such as weather targeting, geofencing, and other ROI-driven capacities.

If you still have questions please feel free to ask us and let's get your campaign tuned!